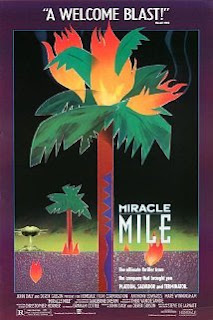 And one of the best B-List casts of ever:  John Agar, Lou Hancock, Mykelti Williamson, Kurt Fuller, Denise Crosby, Earl Boen, Brian Thompson, Jenette Goldstein and Robert Doqui (the police sergeant from the Robocop movies) as a diner cook. If Dick Miller was in this they would have had the full set.

Really, if you haven't seen this one yet, watch it before you read the rest of this review (including the end of this very sentence). It's a bit like The Sixth Sense, in that the movie you think you're watching is not necessarily the one you are actually watching. Not so much in the "twist ending" sense, but the first act of the film is not all that related to the second and third acts. It's hard to explain without ruining an amazingly constructed plot. Which I'm about to do, so consider this the end of the spoiler warning section.

The movie starts with a bit of a narrative fakeout; there's a voiceover from Harry Washello, talking about the girl he just met and how he's deciding to get serious about his life because he's really in love. Serious as a professional swing-band trombone player in Los Angeles gets, at least. Actually, it's two narrative fakeouts because when Harry asks "Where do I even start?", we get a snippet of the Cosmos television series explaining the sheer span of time that it took for the universe to go from superheated gas expanding in every direction to life on Earth. The credits play out over various exhibits at a natural history museum by the La Brea tar pits as Harry Washello and Julie Peters get their federally mandated romantic meet-cute. Why did I say the voiceover was a fakeout? Well, let's just say that a voiceover implies the existence of a speaker and a listener, and by the end of the film neither one is going to exist.

Harry and Julie wind up liking each other quite a bit, even to the point where Harry's wondering if he should try to put down roots and take a square job in order to be with her; after a sparsely attended gig for an environmental rally Julie and Harry meet separately with both her grandfather Ivan (JOHN AGAR!) and her grandmother, who haven't spoken to each other in a decade and a half out of pure spite. Things get awkward, and then they turn out okay again, and then Julie's got to work a shift at the diner that signs her paychecks. They make plans to meet up again at a quarter after midnight but a power failure at his hotel means that Harry's alarm clock isn't doing anything when it's supposed to and missed a few hours when the power is restored, going off as the TV in the hotel room is showing the national anthem and then signing off for the day. He wakes up three and a half hours late, goes back to the diner after realizing he accidentally stood up someone that means quite a lot to him and berates himself all the while for blowing his chance with Julie so conclusively.

When he gets to the diner, it's full of the usual variety pack of 4 AM movie goofballs, Julie's gone and he leaves a message on her answering machine, then gets ready to go back in for his breakfast platter of gyro meat, eggs, coffee and shame. The phone rings just as he's about to go back into the diner and in the kind of movie you've been led to believe this is, it'd be Julie, angry at him but ready to make up and they'd get a super-early breakfast at a nice place and put the past behind him.

Instead, Harry hears a babbling, panicky guy crying and apologizing to his father. The voice on the line says there was a horrible accident and that American nuclear missiles will hit Russia in fifty minutes; they'll notice the launch in five to ten minutes and retaliate. After a little bit of mutual incomprehension the voice on the line realizes he fat-fingered the area code and instead of giving his father an hour to run he's reached a phone booth in Los Angeles. Harry then hears the caller's summary execution and a new voice tells him to go back to sleep and hangs up on him.

There's seventy minutes or so until the end of the world and nothing anyone can do about it. And not only is that the moment where everything is irretrievably fucked, but the moment where the film itself switches into real time--the last sixty minutes of the movie tell the story of the last hour that humanity has to live.

Harry, of course, wants to find Julie and try to get out of the city (not that it would help all that much, but put a person in a no-win situation and they'll try at least some way to get out alive). And he's not entirely certain at the start that the phone call wasn't some kind of weird-ass prank but soon enough he talks himself into accepting the awful, awful truth and tries to ask the only people around him what's going on and what they can do, and the avatar of the 80s businesswoman (played by Denise Crosby) pulls a "high tech" phone out of her handbag about the size of a cinder block and starts asking someone on the other end about today's code, and readiness levels. Bonus points to the movie for having the Obligatory Hollywood Transvestite(tm) be the one who says "Can we just get back to reality here?" at this point, by the way.

From this point on, Harry is stuck playing a Choose-Your-Own Adventure story where every choice is going to lead to Page Thirteen, and in a distressingly short amount of time--and he's one of the very, very few people on Earth who know that's what he is doing. Most of the surprises and reversals in the movie happen from here on out, and I'm not going to go into a heck of a lot of detail because you really need to see this one play out in front of you to get the full effect.

I'd like to congratulate the filmmakers for spending their budget with absolutely exquisite effect. As Harry makes his quest for the next hour we see some of the same people showing up more than once, and as the rumor spreads out like ripples in a pond we get more and more looks at the situation as things get worse and more people are out panicking and trying to escape the city (seeing it go from a ghost town to a crowded nightmare minutes before the end is one of the most effective things in the film). Some people show up more than once and are much worse for wear the second time; others vanish after a single appearance. There's also a fantastic sight gag involving the poor son of a bitch up on the roof with a rappelling line when the SWAT team van gets a retreat order. And you see the inexorability of things, until finally even Harry can scarcely believe that things have broken down so quickly, but he's still deteriorated to the point where he's waving a gun around in a 24 hour gym asking if there's anybody there who can fly a helicopter.

If you want to see a movie that's like living through someone else's nightmare, I can recommend either this one or the Rutger Hauer / C. Thomas Howell The Hitcher, also from the mid-80s. Either way you're going to be pretty wrung out by the final credits, and in this movie, there's raw animal panic leavened with touches of gentle humanity even before the end. The movie starts with the long view of the creation of the universe in a massive blast and wraps up with another flash of bright light exterminating the human race and in that last hour you're treated to a look at humanity in all its facets that a less skilled director couldn't have pulled off a tenth as well. Like some of the other films I've covered at the Checkpoint, this is one that might just be too good at its job to appeal to a mass audience. But it's so good that you should check it out, even if you did read to the end of the review and you know what's coming. I hope that someone out there somewhere just paid to go see it without knowing anything other than the title, and I bet they staggered out of the theater at the end trying not to sob. The final image in this film is one that shows a last tiny glimpse of humanity and emotion at its best before all the lights go out, everywhere, and that's certainly worth experiencing. Especially if you can do it vicariously through the movie.

For second opinions on this film, please enjoy the following takes, courtesy of friends of the Checkpoint:

Jessica Ritchey's take on the film at RogerEbert.com