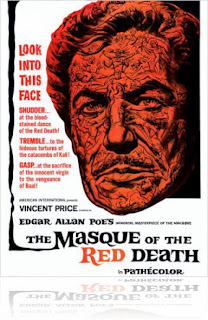 Screenplay by Charles Beaumont and R. Wright Campbell, based on a story by Edgar Allan Poe
Directed by Roger Corman

Man alive, did this one drag. I felt every second of its running time, some more than once. The problem is that the short story it's based on would have to be padded out in order to be one segment of an anthology film and instead it's ten minutes of story crammed into an hour and twenty-six minutes.

In that part of Italy where everyone looks like a British actor, prince Prospero lords over his peasants like a complete jerkoff. They work for an entire year and get the leavings from an annual feast he holds for other nobles; their lives are squalid misery and back-breaking toil. But an old woman gathering firewood on a mist-shrouded sound stage gets hope from a man wearing a red cloak and hood (the skin on his hands and face are crimson as well, which the old woman apparently doesn't notice). He tells the woman to go back to her village and tell them deliverance is at hand.

It is, but probably not in the way they'd like it to be. Sure, they're going to be freed from working for Prospero, but that's because in a day or so they're all going to be hemorrhaging to death from their pores. Not exactly the kind of deliverance one would hope for.

Prospero, for his part, reacts like a one-percenter when Gino the peasant says the end of his reign has been prophesied--he has Gino and another man garroted for having the temerity to talk smack to him. Francesca, Gino's fiancee (and also the daughter of the other guy being strangled) begs for their lives, and after a quick detour to see the old woman from the first scene's body covered in blood Prospero decides to put on his boogie shoes and retreat to his castle, taking Gino, Francesca and her father with him so he can inflict as much misery on all of them as possible. He also has his soldiers burn the village down in an attempt to slow the spread of the plague, and also because he is an asshole.

And then we kill time at the castle for about a goddamned hour. Thanks a bunch, Roger Corman. To be sure, the sets and costumes are great to look at and the set decorators have made several nods to the original story (I particuarly liked the candles in all the chandeliers and candelabras; each fixture has candles in one color as a reference to the seven different chambers in Poe's short story). But just about the entire running time of the movie is made up of set pieces that stall the narrative out over and over.

Vincent Price's Prospero is a Satanist in this version of the story, and believes that by pledging his soul to the devil he'll be able to protect himself and his guests, in that order, from the plague that's ravaging the countryside. This gives Price plenty of opportunities to expound on the state of the world and the rejection of a God that would allow the suffering in the world that even he, insulated by power, wealth and influence, can see every day (not to mention the lack of retribution for all the evil he commits in the world).

The story lurches along in fits and starts--Prospero, in an attempt to seduce Francesca to follow him down the path of devil worship and debauchery, debates the girl over metaphysics and religion. She refuses to buckle under, even though she doesn't have a thousandth of the education or knowledge that the prince does. He tries different ways to test her faith, from the overt to the subtle (and often threatens Gino and her father when he's upset with another tactic failing).

At the same time, Prospero has invited scores of noble lords and ladies to his castle for a great feast, and uses the occasion as an attempt to boost his already monstrous ego by telling everyone his soul has been bartered for everyone's safety from the plague and by bitchily insulting everyone there. Admittedly, it's a lot of fun to watch Vincent Price tee off on a boor. But there's so little going on in the film that the short story "Hop-Frog" is adapted more or less in its entirety, with a dwarf jester dressing a noble in a gorilla suit, tying him up  as a joke at the big masquerade ball, and burning him alive for perving on Esmerelda, a dwarf dancer also in Prospero's employ. Esmerelda is played by a child with her dialogue dubbed by an adult; the disconnect is probably the creepiest thing in the film and wouldn't be equalled for another three decades until the Baby Geniuses movies were released.

Fifteen or so minutes before the movie ends, we finally get the titular Masque (did the screenwriters take inspiration from Gog for this structure, or is it just impossible to turn a five-page story into a movie without padding the living hell out of it?), and the red-robed man from the start of the film shows up to tell Prospero that he's going to die. The prince is so delighted to see a red-clad supernatural being in his castle that he just assumes Satan has shown up to stroke his ego; we get a great bug-eyed panic fit from Vincent Price when the truth finally sinks in. The avatar of the Red Death walks through the castle, infecting all the revelers--and in a creepy scene that's too little and too late to save the movie, they dance until they drop, leaving Prospero alone in a room full of dead bodies. He flees to save himself, locking the door of his Satanism room and turing around to see the Red Death is already in there with him. Gino and Francesa make it out alive along with a few other people from the village, and the Red Death joins a procession of other robed figures that represent the Black Plague, Yellow Fever, and whatever diseases you'd associate blue, orange, purple and white with. It's a striking image that also comes far too late to salvage the film, but I'm really glad it's in there.

This was Roger Corman's first film to be shot in England--a tax break for movies shot in the UK and standing sets left over from a prestige picture meant that he could stretch his production dollar even farther than he would have in America. And to his credit, the film is always great to look at--the costumes are sumptuous and the castle sets are shot beautifully (Nicholas Roeg was the cinematographer on this one, and he's an invaluable asset to the production). But the film is so leaden, with so little happening for massive stretches of time, that I can't really recommend it to anyone unless they're Poe, Price or Corman completists. I wanted to really love this one. It's based on my favorite Edgar Allan Poe story (every time I'm at the Art Institute of Chicago I make sure to stop by the Marc Chagall stained-glass window that reminds me of the decor in Prospero's castle). But there's only so many unconnected-to-the-main-plot dream sequences, monologues, murder plots, improv exercises, dance numbers, falconry exhibitions and bird attacks I can take.
Posted by Tim Lehnerer at 6:58 AM