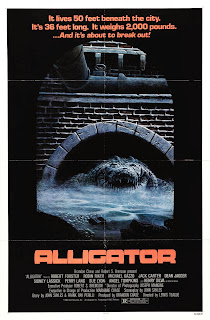 There's a surprising number of ocean-free Jaws ripoffs. Grizzly bears, tarantulas, a potentially magical buffalo, huge rabid bats, earthworms, and a devil car have all shown up as the menace to threaten the cast of a movie (some more effectively than others). But it still takes some guts to stick your "one guy says to close the beaches" plot in Chicago.

The pre-credits prologue shows a girl on vacation with her parents in Florida in the late Sixties, watching a mishap at an alligator wrestling show and very likely rooting for the alligator. She buys a hatchling gator as a pet and names it Ramon--which causes me to imagine the monster on stage trying to eat the roadies while Joey, Johnny, Tommy and Dee Dee play "I Wanna Be Sedated"; before too long, her father is tired of owning the thing and flushes it down the toilet. Ramon winds up alive and well (and probably disoriented) in the Chicago sewer system and the film skips ahead twelve years or so.

During this skip ahead, we meet one of our two protagonists:  David, a Chicago homicide detective who's noticeably losing his hair and is a little bit touchy about that. He's called in to investigate a severed arm that showed up at a sewage treatment plant. In the same sludge tank, a vastly oversized lhasa apso was found with all its internal organs removed and its vocal cords severed. It turns out that a pet store owner has been selling his excess stock to a drug research company for a series of hugely unethical experiments, and the lab expects the pet shop owner to quietly dispose of all the animal bodies. One brief alligator attack later, and half a severed leg shows up in the sewage treatment plant. David gets assigned this case as well, musing that he could open a spare parts shop if more cadaver parts pop up.

During a press conference, a little bit of Madison's back story is mentioned by a reporter--in St. Louis, his partner was shot in the "Hotel Baldwin incident", giving the impression that everyone in the room knows about it so it had to be at least somewhat notorious when it happened five years ago.

When Madison and a uniformed cop search through parts of the sewer looking for further evidence, they get separated (never a good sign in a monster movie), find the pet shop owner's shopping cart and lantern, and attract the attention of a now more than fully grown Ramon, resulting in the horrible death of the beat cop and a massive psychological trauma for Madison. The same journalist who asked Madison about the death of his partner in the past smells another story and eventually puts enough pieces together to find where the beat cop vanished. Although he's a slimy creep, the tabloid hack goes out like a champ, taking pictures of Ramon even as he's killed by the monstrously large alligator. When his camera turns up in a filtration tank, the film shows abject proof that there is a really big gator in the Chicago sewers and that it's killed and eaten at least four people at that point.

One massive expenditure of municipal overtime in the sewers later, the police attempt to make lots of noise to flush Ramon out of the sewer and capture him; this works as well as the first plan in any monster movie does. The police in charge of the operation sneak off before any embarrassing questions can be sent their way by the assembled press (or the mayor can chew them out for spending all that time, effort and money with no results).

That very night, the monster breaks out of the sewer and starts to make its way across the city (moving from the poorer neighborhoods to the richer ones as if John Sayles is trying to make some kind of point about what levels of service various socioeconomic strata can expect from the police in his silly monster rampage movie). The aftermath of this first above-ground attack is quite well staged, with the camera following Doctor Kendall as she walks past ambulances, burning cars, and police trying to take control of the scene.

The next morning Colonel Brock, a big game hunter, shows up at the mayor's request to try and bag a singular trophy in the urban jungle of Chicago. There's a charmingly goofy scene where the egomaniacal Brock hires ghetto youths to serve as his "native bearers"; when we return to Brock's subplot, they get to watch as he finds out how effective the second plan in a monster movie is, although to be fair he was smart enough to find the alligator's temporary nest in an alley. Sic semper overconfident dickheads.

In the second and third act we hit most of the expected plot points--Madison is kicked off the force for leaning too hard on the drug company's scientists when he gathers evidence that the illegally disposed animals, saturated with synthetic growth hormones, are the reason that the alligator has grown to its massive size. He and Doctor Kendall find themselves mutually attracted as they continue to work the case. The monster attacks continue as it works its way across the city from poorer neighborhoods to richer ones, leaving a trail of destruction in its wake and finally crashing a high-society wedding where it kills the CEO of the drug lab that spawned it like a good abomination of science. At the end it all comes down to Madison, trying to set off a methane explosion in the sewers to kill the monster.

This is a charmingly weird movie; I think John Sayles' script is the main reason that it's as enjoyable as it is (but certainly not the only factor). When the plot outline has been used a dozen times before, it's to a movie's real advantage to have clever touches in it (the first victim is a sewer worker named Edward Norton, for example). And the movie instantly undercuts the genre cliches by first showing its Cop On The Edge buying a puppy. Robert Forster gives off a world-weary charm as Detective Madison, working his way through the obligatory scenes sparring with the required Stupid Chief and kindling a romance with Doctor Kendall. There's plenty of references to Forster's character going bald, which provide him with a sense of vulnerability and humanity that most leads in monster movies don't even come close to touching. You could do a hell of a lot worse and not much better if you wanted to watch a big animal kill people before the hero takes it out. And you get to see a special-effects reptile beat up an entire limousine. None of the sharks ever managed that in any of the Jaws movies, now did they?
Posted by Tim Lehnerer at 6:47 AM