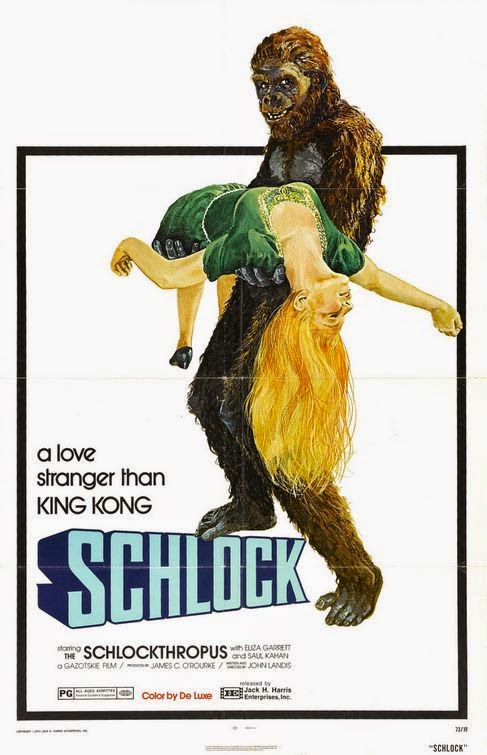 Written and directed by John Landis

This one starts out pretty odd. It's got a trailer for itself at the beginning of the movie, comparing it to Gone with the Wind, 2001:  A Space Odyssey, and because it's a John Landis movie, See You Next Wednesday. It then announces that the star of the movie is THE SCHLOCKTHROPUS, which I hoped would be an octopus made out of old movie film. No such luck; it's just John Landis in a rather good monkey suit, especially considering the tiny budget of the film ($60,000 for everything start to finish, including finding someone who could punch all those holes in the side of the film before they shot anything).

There's a long shot over bodies lying all over the place on a playground; the carousel is still spinning. A detective and a beat cop are at the end of the pan; when the cop goes back to a squad car he trips over one of the many bodies. A pair of other police show up to haul bodies away and steal someone's watch. A reporter for local TV shows up for an exposition drop, telling the audience that there are 239 total victims so far of the "banana killer". The first viewer to guess the correct number of victims at the current scene will win a KFC dinner for six courtesy of the television station. John Landis obviously read a lot of Mad Magazine when he was a wee sprat, I'd say...

One victim is clinging to life and screams "BANANAS!" before succumbing to his injuries. When the reporter asks Detective Wino for a sign of confidence that the murders will be quickly solved, the cop says he only leaves the house because it's his job and that things are going to get plenty worse before they get better.

Meanwhile, somewhere else, four teens (played by actors long past their high school days, of course) are talking about the upcoming school dance as well as a blind classmate who went in for eye-fixing surgery three days ago. They find an old decayed skull and freak out a bit, especially when telltale banana peels are scattered around. Billy goes looking for the Banana Killer, while the other three teens want to get out of there. Billy falls into a hole and finds one of those cave systems that's been there all along; Betty, Barabara and Bobby join him down there. They stumble across the Banana Killer's lair (and I hope Landis had as much fun writing "Bones!" "Blood!" "Betty!" "Bobby!" "BANANAS!" as I did hearing his actors deliver it).

Billy follows a monster-detritus trail of bananas and skulls and eventually comes to an apeman that mauls him to death at considerable length while Billy screams like a girl. As soon as he falls silent his compatriots ask if he's all right, as you do. Bobby walks up to the apeman and asks if the creature has seen Billy; he gets smacked to death with one hit. And probably had it coming. Betty and Barbara escape, bringing a skull and a sack of banana peels to Detective Wino, who calls in a professor that has a theory about the Banana Killer.

The apeman walks around casually while cop cars show up, and the news reporter says there are nearly 800 victims now. Professor Slivovitz arrives and gives a lecture about the development of life on earth that's nearly the equal of the speech at the start of The Mole Men. He also gives a shout-out to the mighty Allosaurus, best of the dinosaurs, and claims that Godzilla was a real animal. I'm not sure what his degree is in, but he probably knows what he's talking about. At any rate, his theory is that the Banana Killer is really a surviving missing link between Man and King Kong--the Schlockthropus, which probably fell into a river during the ice age, froze, eventually thawed out and is now trapped in a world he never made.

The professor puts one a goofy-looking and budget-conscious metal helmet and descends into the cave looking for Schlock. Of course, the viewer already knew the apeman was up on the surface strolling around. He sees a child and leaves it alone, so maybe he's not that terrible a fiend if you don't surprise him; then again, when he tears the reporter's arm off bloodlessly in the middle of a live report that theory takes a beating. There's general panic, although Wino manages to arrest and Mirandize the monster until it snaps the handcuffs and the cop rather wisely runs away.

The obligatory rampage ensues, with the Schlockthropus ringing a doorbell and mauling a housewife when she answers and attacking a pair of construction workers. There's also the requisite "the cops are driving somewhere" shot intercut into the rampage, a Little League game getting scared off the field and a weird sort of dueling banjos competition between Schlock roaring and a little boy blowing razzberries at him. Schlock gets tired of that and pitches the kid half a mile away or so, but it's all right because the boy lands in a swimming pool. Like lots of monster flicks, adults get mowed down and teenagers are monster kibble, but children are pretty safe. There's also a strange interlude where the Schlockthropus sees a Chiquita banana poster at a country market and the music from 2001 plays. He breaks the window and steals bananas, then chucks them at a longhair that watched everything, stunned.

Meanwhile, Mindy the blind girl waits for her bandages to come off post-operation. She goes outside into her backyard, at the same time that Schlock is climbing over the back fence. The apeman sees her and falls in love while Mindy feels his pelt and thinks that the missing link is actually a dog named Willie. She throws a stick for him and the Schlockthropus dutifully returns it, over and over. Although he gets frustrated because Mindy can't keep hold of the stick--he doesn't quite get fetching. He wanders off and finds a little girl; Schlock grooms her hair, and is completely nonviolent in either scene (I didn't expect character development in a $60,000 parody film where the writer/director was also in the monkey suit, incidentally).

Some time later, Mindy's bandages come off and she can see! Of course she can; Landis might be making a parody with a three-digit body count but he's not cruel enough to have the sight-restoring operation get botched. And once she has her sight, she goes looking for "Willie" the dog. Schlock finds her when she's kissing her boyfriend and gets jealous--and when Mindy sees him there's multiple crosscuts of her screaming in fear. The apeman chases Mindy and her boyfriend into the house and hits them with a pillow, then tips over an end table. Even for a no-budget movie that's not much of a rampage. Mindy's boyfriend wards the Schlockthropus off with a road flare (the natural enemy of several species of monster) and locks him in the bathroom. The police arrive and Detective Wino puts on a gorilla mask that he believes will let him lure Schlock away. He tells the police to shoot the first thing out of the door, and when he blows the signal whistle before going inside every cop empties their gun into him (don't worry, kids, he's scorched and his clothes are shredded but he's as unkillable as Daffy Duck in this scene).

As soon as nobody has any bullets left, the Schlockthropus knocks the door down, flings some police about the area and walks off to go to the movies. He has no money for the ice cream machine, but acquires a gigantic armload of candy and sits down next to Forrest J. Ackerman to enjoy See You Next Wednesday, represented by a scene pinched from The Blob (and I think the clearance fee for my favorite Steve McQueen movie might have been half the budget of Schlock). There's a couple little vignettes where a woman with a tall wig blocks some of the screen and a little boy asks for the Schlockthropus to escort him to the bathroom. The movie frightens and irritates the apeman, so he leaves.

When he's outside he gets a lovetap from a car and retaliates by tearing the vehicle to pieces with his bare hands--it's possibly an inspiration for a bonus stage in Street Fighter II or John Goodman's finest hour in The Big Lebowski. He walks off, and somewhere else the big dance (that two of the teens way the hell back in the first act mentioned) is starting up. But before the apeman can get there first he's got to scare people out of a bakery and eat an entire cake--though he does share the cake with a couple girls and their dog. He then wanders to a bar where a blind man is playing the piano (while the bartender leaves to go get a drink somewhere else; is that supposed to be funny or just an excuse to get the sightless dude alone in the bar with the apeman?). The Schlockthropus hears the music and hammers on the keyboard for a little bit; the blind man figures out a way for the apeman to play rhythm to the blind man's lead part. Eventually the bartender comes back and calls the cops adn the song ends.

So we're back to the big high school dance, and this sequence is completely devoid of jokes. The body count gets upped by one when a sulky teenager drives off from the parking lot of the school after his girlfriend won't put out and the Schlockthropus strangles him. The car drives about a mile before it smacks into a tree.

There's police at the dance to protect everyone; every time someone inside says there's no reason to worry because there's four cops outside standing guard it cuts to Schlock killing one of them. Then he gets into the gym, tearing streamers down and causing a ruckus. Everyone runs and screams except for the people who scream and run, and as we all knew would happen, Schlock grabs Mindy and carries her off (to the roof of the school; it's a budget-minded ape escape). The National Guard is called in, and after Schlock drops Mindy off the roof they shoot the absolute bejesus out of him. They empty their guns, reload, and empty them again before Schlock cries a single tear and falls. A random police says it was beauty killed the beast, and Detective Wino asks what the hell is wrong with him.

And, because it's a monster flick, Dr. Slivovitz (remember him?) comes out of the cave with a little baby Schlockthropus. Roll credits.

You have to meet this movie more than halfway, to be honest, but there's a lot of silly stuff in it if you're a patient type. I had to remind myself repeatedly that Airplane! was half a decade in the future when this movie came out and that parody rules hadn't been completely rewritten at this point. And it seems pretty obvious to me that Landis thought of all the monster-on-a-rampage jokes he could fit into the story, then thought of all the blind-girl-and-apeman jokes, and so on until he had a feature-length script. The main character changes from a homicidal missing link to a disgruntled movie patron as needed by the script; consistency is not the movie's strong point. But I really have to admire someone who was so driven to make a movie that he wrote and directed his own, and Rick Baker built a pretty darned nice monkey suit for the money that he was given. It's not a patch on The Lost Skeleton of Cadavra, but I'm glad I did see it.