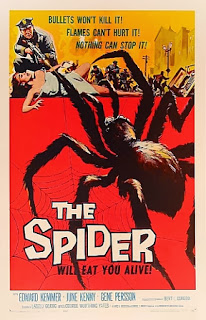 Earth versus The Spider? I'll put sixty bucks on "Earth", in two rounds. That's just a matchup that the spider, no matter how impressive, is going to lose. But the story of how it loses is pretty decent, and this film should be just what the arachnologist ordered for anyone who wants to watch an American monster flick from the fifties. This one's directed by Mister B.I.G. himself; Bert I. Gordon made two decades of feature films with people being shrunk or ordinary things becoming huge. He was pretty obviously in love with the idea. I think it might have been his initials setting him on this path. Kinda like naming your kid Ruthless in a kung fu movie. That kid is going to grow up to be the bad guy. Mister and Mrs. Gordon set young Bert on this path when they named him. Could have been a lot worse. At least we got lots of monster movies out of it.

We start with the American International logo and a brass-and-theremin saturated soundtrack, proving within seconds that it's a movie from the fifties and there will be a monster in it. The credits are run over a slow zoom into a spider web. The cave sequences claim to have been filmed in Carlsbad Caverns, though I'm not sure how much was matte painting and how much was authentic cavern.

Once the narrative gets going, we start with what savvy viewers of fifties monster flicks will recognize as the Threat-Establishing Casualty. Through the noble sacrifice of these characters, the audience will be able to nod sagely and confirm that there is a monster in the monster movie. In this case it's a man driving a pickup truck down a rain-slick rear projection at night. He has a bracelet in a small jewelry box with a note:  "To Carol with love" and signed "Dad". Dad winds up driving into a cable or rope stretched across the highway, wrecking his car and spraying blood over his face in a shot that I thought was pretty graphic for being two minutes in to a movie from 1958--almost to the point where I didn't think to ask where the heck the blood would be coming from.

Cut to the next morning, where teenagers Carol and Mike are walking to River Falls High School. Carol's worried; her father didn't come home last night and Mike blows two chances in a row to not be an asshole about it, or at least to show some concern. Carol storms off but they make up via note-passing in SCIENCE! class during a lecture about how electricity can be passed in an arc between two metal poles, a phenomenon that certainly will not be used to kill the spider off in the third act.

Carol and Mike, in a borrowed hot rod, search the same rear projection from the beginning of the film and find a two-inch-thick strand of webbing stretched across the road. They don't know what it is, exactly, other than sticky and weird, but near the web strand there are shards of auto glass that suggest a car crash. Carol finds the jewelry box with her birthday present in it, then sees the wreck of the pickup truck her father was driving. Her dad isn't in it, and Carol surmises that he might be in a nearby cave with an unspecified bad reputation ("I don't believe those stories about the cave," Mike helpfully tells us, but not what those stories actually are).

There's a NO TRESPASSING sign at the cave mouth, but Mike and Carol trespass anyway looking for her father. They walk through a few matte paintings and Carol's shouts for her father dislodge a stalactite from the ceiling; only Mike's quick action saves her from inspiring the Piercer from the 1st edition AD&D Monster Manual. Seconds after that the pair stumbles over two skeletons, freaking them both out. This shock is surpassed almost immediately when they fall into a gigantic web stretched out past a drop in the cave floor and the promised Big Damn Spider shows up, stalking towards them and making squeaky inhaling gibberish noises like the Barbarian Brothers with lungs full of helium. They extract themselves from the web and beat feet out of the cave, driving back towards town.

In the next scene, the teens are explaining what they saw to the science teacher and Mike's dad. The teacher says the chunk of webbing they brought back as evidence certainly looks like a gigantic strand of silk, but he doesn't believe in giant spiders without more evidence. Mike's dad stands up for him (kind of a novelty in fifties movies), saying he didn't raise a liar. When the teacher calls the sheriff he gets blown off re: spider possibility, but gets a dig in about Carol's father still being missing, and perhaps the law enforcement in the area might consider going to look for him or something? All the respect you have for the teacher in this scene will be gone the second time he refers to spiders as insects, though.

The sheriff gets a posse together along with a truck full of DDT and two guys who work for the pest control company that know how to use the stuff. Mike and Carol lead the group into the cave in a scene that totally does not pad the running time out tediously until Carol finds the drained husk of her father. After this, the sheriff sees the web and then starts to believe in monsters. The DDT guys spray poison all over the place and the spider shows up to fight back. It kills a panicking deputy stuck in the web and succumbs to the twenty-times-higher-than-normal dose of insecticide. When everyone is safe outside, Carol discovers that she dropped the jewelry box in the cave but now that it's full of poison gas she can't go back in. My notes say "Man, the sheriff is a dick" here but I don't remember what he specifically said to make me want to write that down.

Back in town, the Big Damn Spider's body is on display or in storage in the high school gym, since it's a big enough room to store the thing. The science teacher wants to sell the body to the local university so it can be studied (and he can get back the money he spent out of pocket hiring a house-moving company to get the spider back into River Falls).

Also back in town, Carol is in mourning for her father while her mom is kind of a Stepford wife about everything (alternate hypothesis:  Mom is drunk as hell, but not showily so). Carol makes plans with Mike to sneak back to the cave and get the bracelet back now that the spider's gone; they borrow the same car from before and go back to the spider's now-empty lair.

Joe, the guy who is really nice about loaning his car out, has a sort of rock band who practice in the gym. There's an instrumental that would prompt me to start singing "Too Drunk to Fuck" at B Fest if they show this movie, and it actually wakes the spider up, who eats Hugo the janitor and proceeds to wreck whatever parts of town it can get to. The science teacher rams the spider with his car and drives off, leading it away from civilization and guiding it back to the cave. Where Mike and Carol are looking for and eventually finding the bracelet, and potentially setting themselves up to be the tragic deaths in the weirdest doomed-teenager song ever written (surpassing even Johnny Cymbal's "The Water Was Red", where a shark eats the girlfriend of the protagonist).

The spider returns to the cave and the sheriff leads the effort to dynamite the entrance. Once the adults realize the two teens are stuck in the cave with the Big Damn Spider, they dig a shaft in to rescue them. The spider is electrocuted by a current passed between two charged metal poles (just like the first act told us about) and the kids are safe. It looks like the science teacher is just going to have to eat the cost of moving the spider back into town, though. But at least he, his wife and his infant child made it out all right.

This is about the most typical monster-rampage movie you will ever see. Other than some of the adults believing the teenagers who survive the first big monster encounter, it's a lot like any of the other teens-versus-a-menace in virtually other respect. Bert I. Gordon doesn't bring a heck of a lot of individual flair to this one; he's a director in the Old Hollywood mode, not using shots or techniques that reveal his artistic sensibilities or themes. Instead he's like the old hired guns of moviemaking, producing films quickly and under budget in order to keep the product churning in the marketplace. And to be fair, people are still watching his movies half a century later and more. And perhaps I'm selling him a little short; the matte paintings and large-spider scenes are handled rather well and there cannot have been a hell of a lot of money to make this one. If it's the product of a low budget and a rushed schedule, it's still got a beginning, middle and end and it's got some likeable characters working their way through a crisis as a community (with the exception of the sheriff, who is a sneering jerk to almost everybody he encounters). I don't know how audiences took it the year that Sputnik was launched, but having an authority figure in a monster flick that's not necessarily meant to be looked up to is a little bit of a revelation.
Posted by Tim Lehnerer at 6:58 AM