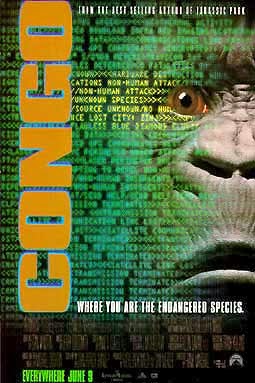 Screenplay by John Patrick Shanley, based on the novel by Michael Crichton
Directed by Frank Marshall

This is a movie that lets you know exactly what it's going to be like from the first minute of screen time. First--some shots of the African plains and mountains, then Bruce Campbell outside a tent, a satellite in orbit and a high-tech command center. A computer guy has to open a door with a key code and voiceprint and puts a sneer on his face as he says "Rudy, Rudy, Rudy, Rudy," with increasing venom on each repetition. And the movie's not getting any better than this, so if you didn't find that amusing you might as well tap out now.

You get dumped pretty much in the middle of the plot, with Bruce Campbell playing Charlie Travis, who is in the Congo looking for diamonds so he can make awesome lasers for a telecommunications empire run by his father (which makes Joe Don Baker this movie's Telstar Man). Another expedition member finds a lost jungle city while looking for the source of the diamonds and wanders into a dark stone temple--not a move with any long-term survival potential. Charlie exits the film at this point as well, with Campbell apparently cast specifically because he screams really well. The automated satellite call back to TraviCom shows an empty campsite, the bodies of the expedition (minus Charlie) and a killer grey-furred gorilla.

An expedition from TraviCom is hastily put together to find out what the hell happened; his ex-fiancée Dr. Ross is dispatched by Joe Don Baker's telecommunications magnate to take over an existing Congo trip and hire good people to help get to the diamond-discovery site, retrieve everyone's bodies for a decent burial, investigate what happened, and recover all the flawless diamonds in the area so that TraviCom can control the next decade of diamond-laser satellite communications. Ross's priorities are in that order; Travis's are not.

The scene then shifts--jarringly--to a primatology lab where the future producer of The Monuments Men tries to mentor a gorilla in finger painting. I don't know if Grant Heslov keeps this one on his resume any more, but if I were in Congo I'd never stop telling people I was in it. It turns out that two primatologists are combining motion-tracking virtual reality computer technology with the sign-language capabilities of Amy the gorilla in order to communicate with a primate in more or less real time, with other people able to observe the two-way paths of understanding and response between the human and the gorilla. Which, to be honest, is awesome. The retro-technology fan in me also loves the hell out of the vintage film screened at the primatology demo where a person born without vocal cords uses a sixty-pound rig connected to the "desktop" version of Colossus in order to "speak" for the first time in his life.

The talking gorilla is a big hit with the sparsely populated college auditorium audience, and we get a shot of Tim Curry looking at a piece of jewelry that shares a motif with one of Amy's finger paintings (not that he would know what the gorilla's paintings look like). It develops that Amy has been having nightmares and the two primatologists decide to try and let her loose back in the jungle where she was captured as an infant; the university president (James Karen, who has been in this, Return of the Living Dead, and Frankenstein Meets the Space Monster--truly a B movie c.v. to die for) refuses to try and fund any project that will result in the absence of a talking gorilla on his campus. In steps Herkemer Homolka, a "Romanian philanthropist" portrayed by Tim Curry in Bela Lugosi accent mode. He offers to personally pay for the expedition and Amy's going to go home.

Or so we'd think, except that Homolka's broke and can't pay for the jet fuel that will get the expedition plane to Africa. In steps Dr. Karen Ross from the other plot thread, with an unlimited line of credit and suddenly the loaded then unloaded plane gets reloaded and the members of the main cast (with the exception of Ernie Hudson as their native guide in the Congo) start their linked quests.
There's also an exposition drop in which the sensitive 90s man primatologist declares that the "killer African ape" is a myth perpetuated by uninformed outsiders; could that possibly turn out to blow up in everyone's face later?

The cavalcade of awesome character actors continues once the party reaches the airport; Joe Pantoliano is their fixer ("Now wasn't that easier than going through customs?" is not something I'd want to hear after a guy in a knockoff Hawaiian shirt stamped my passport, personally) who fires their guide and introduces them to Monroe Kelly (played by the invaluable Ernie Hudson, doing a fantastic Cary Grant impression in a dueling-accents competition with Tim Curry). A failed coup attempt at the airport leads to a truck-jacking and a narrow escape from the squads of soldiers running around the tarmac with machine guns. Monroe Kelly turns out to be a man of action and a cheerful rogue, which is the kind of person you want on your side in this kind of B movie situation.

The group is detained by soldiers as the Congo-Zaire border is closed and we get to see another one of the golden highlights of world cinema in the following scenes--an uncredited Delroy Lindo as Captain Wanta, demanding that the detained group eats sesame cake (and then yelling at Herkemer Homolka to stop eating his cake) and fussing over the bribe he takes to let them past the border. He brings a touch of absurdity to the proceedings noticeable even among the background radiation of Joe Don Baker:  Satellite Owner and talking gorillas. I missed him for the rest of the film after his brief scenes were finished.

The rest of the film is packed with alternating exposition and action--the group makes its way through Tanzania to get to Zaire to get to the jungle region where Amy was captured; first we learn that Herkemer Homolka is looking for a lost city in Africa and then their plane is attacked by ground troops using Stinger missiles. Monroe and Dr. Ross use flare guns to confuse the heat-seeking missiles and get away from the attack in a sequence unlikely to make a Cracked list devoted to realistic air combat. The crew and adventurers abandon the plane after the missiles are spoofed (I'm not entirely sure why), and the rest of the trek is on foot (and raft). A call back to TraviCom headquarters drops some foreshadowing about the third act (the images on the previous satphone call have been computer-analyzed and show a new species of gorilla on them; the Verunga region is undergoing serious seismic activity and could blow up any time, but will definitely go up soon).

Next we get a Survivor of Horrible Events Freakout Monologue from Bob Driscoll, sole survivor of the previous TraviCom expedition; he wakes up from a shock-driven coma and sees Amy, then screams uncontrollably and dies of terror (which is too bad; the guy who played Solomon Star on Deadwood deserved better than yelling a lot and doing a head-slump). Then there's that raft trip I mentioned earlier, complete with nighttime hippopotamus attack. The group eventually gets to the region they were aiming for--minus a couple of deserting porters, and who knows how the hell they're going to get back home on foot--and the third act can begin in earnest. It should not surprise the viewer that the lost city of Zinj is full of diamonds, the unknown species of killer grey gorillas are really there, and that the volcanic activity alluded to from the first scene means lots of stuff falling over and / or being swamped by lava. Virtue is rewarded, evil punished, self-interest sows the seeds of its own destruction and the lonely gorilla gets to go back to the wild. Also a communications satellite is blown up in a totally gratuitous action sequence and Joe Don Baker yells at a TV screen.

Congo is a rollicking adventure movie full of stuff happening and packed to the gills with character actors (and some gorgeous scenery courtesy of location filming in Costa Rica), and yet it never really jells into something great--or even all that good. The two leads seem to think they're in an A movie about primatology and exploration, while the supporting cast uniformly realizes they're in a flick with killer monkeys and a lost African city full of diamonds. I really wish I could have sat in on lunch with the cast--for a B movie junkie like myself, listening to Ernie Hudson and Bruce Campbell swap stories with Tim Curry and Joe Pantoliano would be utterly irresistible. It seems pretty obvious that this one got greenlit when Jurassic Park was a worldwide smash; Michael Crichton's catalog got mined for several films in the 90s, with this movie and The 13th Warrior representing his backlist. Some times he had a billion dollar idea, and the other times he had killer monkeys and Tim Curry as an Eastern European diamond-city searcher. This film isn't nearly as bad as its reputation might suggest, but you can do a heck of a lot better.
Posted by Tim Lehnerer at 1:16 PM