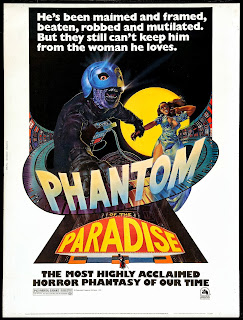 When the movie starts with keening electronic tones and a Rod Serling voiceover, you know exactly what you're in for. There might as well be a road sign saying HIGH WEIRDNESS NEXT 90 MINUTES, followed by another saying THIS FILM IS ABOUT LOTS OF THINGS I LOVE. I can't say for certain, of course, but I'm willing to bet--based on this movie--that Brian De Palma sympathizes with the outsider in any given situation, has a fondness for vintage rock and roll, and feels that when businessmen get into the art production business the artists are lucky to escape with the fillings in their teeth. And he's also got one weird sense of humor. This movie features De Palma's aesthetic at its least sane and least restrained. It's got a nice beat, and you can dance to it. That's why I love Winnipeg's number one cult movie, The Phantom of the Paradise.

Rod Serling is telling us about Swan, a child prodigy singer and record producer that singlehandedly masterminded every major pop music trend for decades. Imagine Phil Spector, Berry Gordy, George Martin and Joe Meek in one body and with a voice that could shift a million singles on its own. Now make sure that body is about five foot two, with long dark blonde hair and a pudgy baby face. That's Swan. And according to the opening narration, he's the actual monster of the film, not the Phantom. But that won't become apparent for a little while...

Every megalomaniac needs their Xanadu, their hollowed out volcano lair, their Castle Doom. And Swan's is the Paradise, a rock venue meant to outshine all others. The building is built, the speakers are wired and the seats don't have any bubblegum under them yet. But the opening night show has to be a legitimate spectacular, or Swan will feel that he's no longer the absolute pinnacle of achievement in pop music (which would be bad, I guess).

Swan hears the song he wants to use to open his concert hall, but the guy playing it is a Coke bottle glasses wearing, scrawny, charisma void that simply won't do in the image-obsessed world of bloated-ass 70s rock abortions. Swan orders his Renfield to snag the only copy of the music with the promise of a record deal; he has no intention of living up to the promise to produce the 300-page Faust-inspired rock cantata as Winslow Leach, its composer, intends it. But he sure can pillage the best bits and work out something new and more commercial. Leach falls for Swan's line of bullshit by proxy but eventually has second thoughts and sneaks into the record mogul's mansion just to take a meeting. He winds up stumbling across a line of hundreds of auditioning singers, all using copies of his material. The best of the lot is Phoenix, and she's also the only person in the building who believes that Leach wrote the material. A little bit of a spark passes between the two, and Phoenix refuses to use the casting couch in order to get a part, even to open the Paradise.

A little bit of bodyguard brutality and police corruption later, Leach gets a life sentence in Sing Sing (heh...), where his teeth are all pulled and replaced with stainless steel dentures as part of a medical experiment underwritten by the Swan Foundation. He overhears that his cantata is going to be performed at the Paradise's grand opening by the retro-50s pop group the Juicy Fruits and flips out, escaping from prison and trying to destroy the Death Records pressing plant with a dynamite bomb he got out of nowhere. A catastrophic industrial accident gets half his face burned off in a record press and destroys his vocal cords; he's shot by a security guard and falls into the East River and is presumed dead but his body is not recovered.

One lengthy POV shot later, Leach has snuck into the Paradise, stolen a black jumpsuit and cape out of costume storage and masked his horribly burned face with a really cool metal eagle mask (and once he gets an artificial voicebox on his chest, he looks like a glam rock dry run for Darth Vader). And he starts his campaign of vengeance against Swan, not particularly caring who gets hurt on the sidelines while he's getting his war on. The Beach Bums (a 60s group made up of the same actors as the Juicy Fruits but singing surf rock instead of doo-wop--I'm not sure if they're supposed to actually be a different band or just a reference to a different musical genre) are collateral damage when a time bomb goes off on stage. This sequence is pretty damn great, with a split screen showing Swan's main lieutenant as a stage manager getting the singers and dancers on the left side of the screen, bomb audibly ticking in the prop car; on the right side of the screen, the Beach Bums sing a song called "Upholstery", completely oblivious to the danger they're in.

Swan comes face to face with the Phantom minutes later and makes him a deal, promising to put a different group together and give Leach creative control over the cantata's casting and performance. Even though he already knows what a total shitheel Swan is, and even though he's already suffered a half dozen traumas at Swan's instigation, Leach takes the deal.

Phoenix winds up getting the part (there are two great shots in this sequence--the first is Phoenix singing right at the camera / viewer, and Swan and the Phantom nodding at each other during her audition; that part is like a single frame split screen), and Leach gets back to composing. There's another great scene that follows soon after, with Leach singing in a room that is one gigantic Moog synthesizer (it looks kind of like he's performing inside Telstar I, which endears the movie to me even more than it already had); his artificial voicebox starts out as a staticky screech and Swan, in the control room, changes the soundboard settings until he gives Leach a pleasant voice again. They're both working together to make opening night at the Paradise as good as they can because underneath it all they both still love music. Intriguingly enough, the Phantom's singing voice is provided by Paul Williams; I believe it's a way for De Palma to show that Swan is just using Leach's talent for his own uses again. Winslow Leach is the one creating the work, but Swan is forcing him to do it with the voice of the man who tortured and maimed him.

Swan just happens to have a 500 page contract that he wants Leach to sign in blood in order to seal their brand new deal ("All articles which are excluded shall be deemed included. What does that mean?" "Oh, that's a clause to protect you."). Leach gets busy revising his cantata, and Swan hatches some kind of plot against Phoenix so heinous that even his Renfield thinks it's going too far. While he's at it, Swan decides to cast a glam rocker drug vacuum named Beef as the lead with an eye towards hurting Leach even more--and I can only describe Beef's scenes like this:  Even after I saw them, I was not certain I believed them. De Palma even takes a shot at his own obsession with Alfred Hitchcock in a scene with Beef, the Phantom, a riff on the most iconic interrupted shower in cinema history and a toilet plunger.

Leach finishes his cantata just in time and Swan has him sealed into his composer's garret with a brick wall; even for a Satanic bargain, that's harsh. The Phantom breaks out in a fit of rage (breaking through the brick wall and the steel door behind it with his bare hands), and sees the KISS-themed stage show using his lyrics and music. He registers his displeasure with overblown horror-rock by sending a neon-tube lightning bolt into Beef, who finds out just how awful it is to die onstage. The next night it's Phoenix's turn to sing and Swan gets her under contract so that the audience can cheer an assassination and resurrection every single night the show is performed. The audience thinks they're going to be watching stage trickery, not Satanic magic. It's down to a maimed lunatic with fits of rage to protect a woman who doesn't know what misery she's in for as Swan finds out just how far the Phantom is willing to go to protect his art and the woman he's come to love...

One of my favorite ironies about the movie is that Paul Williams was offered the chance to play the Phantom, but didn't want to look like he was burning his bridges by playing someone who got ripped off by the industry and fought against it. Somehow--and how this didn't hurt his career even worse I will never know--he went for the part where he'd be an egomaniac who steals from everyone he can, hands out drugs by the literal handful, sold his soul to remain pretty and rich for his entire artificially extended lifetime, and is homicidally displeased with anyone more talented than he is. How in the hell is that better than playing a legitimately wronged man out for disproportionately brutal vengeance? It's also brilliant casting because he's so obviously not a physical threat to anyone in the film, but rather a spiritual one.

The satire of the music industry is also great in this one; I love how the Juicy Fruits, Beach Bums and Undead are all the same people in different costumes playing in different styles. It might have been a money-saving measure by the studio to have one backing band and pack of vocalists for three different musical numbers but I think it's also a very resonant image to have the same people used as living props to do a few different musical numbers in different styles. And hey--if we're going to look at real pop music, the Belmonts, Beach Boys, Beatles, Bee Gees and Boyz II Men all did music with lots of harmonies in more or less the same rough style; the musical trends change but the bands keep doing their thing. And in a movie about creative theft, it's amusing to see Gaston Leroux, Goethe, Oscar Wilde, the Twilight Zone and Psycho all get referenced at one point or another. Certainly De Palma has a reputation for appropriating other filmmakers' techniques (specifically Alfred Hitchcock's), so maybe the cruelest and subtlest joke in the movie is the way it reflects what the director could have thought about himself.

If you'd like a second opinion on the movie,  Guardians of Geek has a review of the film as well.
Posted by Tim Lehnerer at 7:06 AM