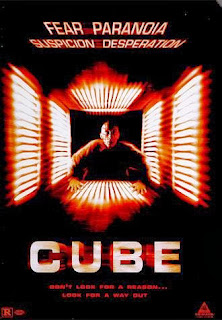 This movie is as pitiless as a scientist looking at a bacterium on a microscope slide.

It starts with a wordless sequence that serves as an instant introduction to the world of the film:  A man with ALDERSON on the pocket of his prison-like uniform wakes up on the floor of a cube-shaped room and looks around in surprise. There are doors in the four walls, the floor and the ceiling; each leads to another cube-shaped room. The walls in each room are lit from behind by different-colored lights and Alderson figures the yellow room is as good as any to take a look at. Three steps across the floor and there's a metallic whooshing noise. Alderson falls apart into neatly sectioned chunks of meat and bone and a metallic grille retracts into the room's ceiling. The movie now has your full attention. Roll credits.

In the next scene, an injured black man ("Quentin") climbs out of the floor hatch in another white cube, failing to wake up the sedated white man ("Worth") already there. They're quickly joined by two women--Leaven and Holloway, and an older white guy, Rennes. After a few group-wide botched attempts at communications and understanding, Rennes demonstrates that tossing a boot into a room with a motion detector sets off the death trap, demonstrating that there's at least one way to test a room to see if it's safe and the group sets off in a straight line looking for the exit, operating under the reasonable assumption that they all got into the maze of deathtraps, so there's got to be at least one way out of it. They set off in a group in preference to staying alone in a potentially lethal situation.

Before too long the members of the group find out that some of them bring something to the table that might help them out--Quentin is a police officer, Holloway a doctor. Leaven notices a set of three three-digit numbers on the hatchways between rooms and says they're different in each room, though what they signify is unknown to everyone. Rennes is revealed to be a criminal and multiple prison escapee that Quentin's heard of from his day job. (I wonder what Alderson was going to contribute before his untimely and messy death...) Rennes is also the first one to be killed by a trap (a face full of acid in this case), not having fully anticipated all the different ways the cubes can sense a human presence inside them.

Everyone tries to take stock of the situation again, and figure out a plan to avoid the lethal rooms to get to the exit. Quentin points out that everyone's been stripped and dressed in the baggy prisoner uniforms, but Leaven's glasses stayed with her; if everyone has only the tools they need to escape from the cube, obviously there's something in the rooms that she needs to be able to see. It turns out that having a university-level mathematics student is very useful, especially when she figures out that a prime number stamped on the hatchways signifies a death trap in the room it leads to.

From there the group soldiers on, using this new piece of information to identify which rooms have to be avoided and reinforcing each other psychologically, but the massive amounts of stress are already starting to wear on everyone. Eventually they find a room that leads to four deathtraps and a ceiling door that drops a sixth person into their group; his name is Kazan and he's got Hollywood Autism(tm). They work together to get to the safe room in the ceiling and progress a bit more, bickering about whose theory is better re: deathtrap cube room complex construction. It's around this point that two things happen:  One, a room without primes almost slices Quentin to pieces. Two, Worth reveals that he worked on part of the cube-construction project himself, and that there's one exit door in the entire facility ("Where is it?" "Wherever the door guy put it!").

Eventually Leaven figures out a way to navigate through the rooms, aided by the innate mathematical ability that Kazan has because he's got Hollywood Autism(tm). But even as progress is made step by step, the stress fractures in the group worsen, room by room, and it turns out that razor wire and flamethrowers aren't going to be half as dangerous for the group as the homicidal fear of people stuck in a brutally desperate situation...

There's a hell of a lot I admire about Cube; it's far from flawless (some of the acting is inconsistent at times, but even though some performances range from shrill to Shatnerian there's still things like the quietly devastating exchange between Holloway and Worth that makes Worth even more guiltily complicit in his own punishment), but the people making it worked hard to keep the tension ratched tighter and tighter. And all on a tiny budget--the IMDB says $350,000 Canadian went into the film. It's the little things that help a lot; the laudable attention to continuity detail means that the men grow stubble as the time passes on, and everyone gets sweatier, hollow-eyed, fatigued and withdrawn. The main cube set is another example of economy pressed into service--the filmmakers only needed to build one five-sided set and pointed the cameras from the sixth wall. They swapped out the lights for every time the characters moved from a white room to a red one, or green, or blue; every time there's a scene change they just drop in from an appropriate door and give the illusion of travel. And the contrarian lefty in me loves seeing the "I'm going to get us out of here and that's just the way it is" authority figure turn into a raving psychopath under the inhuman levels of stress and pressure from the situation. This movie can sit proudly in the pantheon of Canadian horror of ideas; in my mind's eye, the cube is secretly run by someone who could only be played by David Cronenberg, watching dispassionately and taking careful notes every time someone else runs afoul of spikes or napalm.
Posted by Tim Lehnerer at 7:36 AM