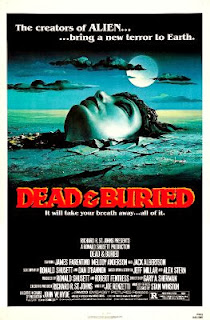 It's a shame this one left me a little cold. There's a lot to recommend the movie (some extremely good cinematography and great one-person-alone-in-the-fog shots, a couple of pitch-perfect performances and a great third-act twist) but it never really jelled for me. I think I was expecting something a lot weirder with Dan O'Bannon's name on the screenplay and I got something that was actually pretty conventional--although applying that term to this movie makes me feel bad, it's the best descriptor I've got.

The film starts out on the shore of a sleepy little New England town (and given that the movie is called Dead & Buried, it's probably safe to assume that it's a sleepy little New England town with an evil secret). A photographer with a VW minibus shoots a roll or two of scenery and birds on the beach as the waves roll in. A woman appears in his viewfinder and the movie-camera-doubling-for-the-diegetic-observer pans leeringly up her body. There's probably a dissertation to be written about the layers of observation and viewing in that shot between the characters and the audience. The woman says the photographer looks like a Freddy and calls him that; in return, he christens her Lisa and they make a little small talk. She poses for a dozen or so pictures, then opens her blouse to capture the photographer's full attention. Which turns out to be a trap; he gets surrounded by a small crowd that beats him down and then ties him to a piling on the beach, douses him with gasoline and lights him on fire. After they officially welcome him to Potter's Bluff, because it would have been rude not to, I guess. While he burns and screams, various people in the crowd take pictures of his suffering.

That night, the town fireman find his minibus upside down in the middle of the road, on fire, and with the badly burned photographer inside. Dobbs, the town coroner and mortician, shows up and there's a neat jump scare revealing that the poor bastard is horrifically burned but still alive.

The next morning, sheriff Dan Gillis gets breakfast with a side of the townspeople busting his balls over his inability to "solve" the accident, whatever that would mean. The victim in the VW was burned beyond recognition, but he was also from St. Louis and travelling through Potter's Bluff on vacation so it's unlikely anyone in town would have known him if they'd seen him. The waitress who expresses sympathy for the burn victim is the woman who lit the match to murder him, incidentally; this is one of those movies where the audience knows a lot more than the characters do and that comes into play quite a bit (and very effectively when it happens; there's several times that just seeing one character's face can be ominous, even if what they're doing isn't openly menacing).

For the rest of the film, Gillis' efforts to figure out what the hell is going on in Potter's Bluff are intercut with scenes of what the hell is going on in Potter's Bluff. Several more people are killed by the townies, and every time the people not actively murdering a victim are in the back with equipment ranging from Super 8 cameras to Instamatics, taking photos and film of the doomed people before they're killed. While that's happening, Gillis tracks down the photographer's name; he's really named George LeMoyne and the sheriff really, really wants to talk to him to find out what happened to him. Before that can happen, "Lisa" from the opening scene walks into his hotel room dressed as a nurse and plunges a long-needles syringe into his remaining eye in a scene that got the film banned in the UK during the "video nasty" moral panic of the early 1980s. For my money, it's the honey-voiced small talk from Lisa that's scarier than the shot of the needle going into a helpless victim's eye.

While Gillis tries to put the pieces of the puzzle together, more bodies pile up (including one entire family surrounded in an abandoned house; they make it to their car and zip past the sheriff while he's on patrol). When Gillis sets off in pursuit, he hits someone seconds after putting the hammer down. As he gets out to check on the accident victim he sees their severed arm stuck in the front grill of his truck. The pedestrian judo-chops him in the neck with the arm they have left, pick up the dismembered limb (which is still moving)! and runs off. In a suspenseful scene Gillis searches a fogbound building, and there's lots of neat shots of the flashlight beam making it impossible to tell if there's a shape in the fog behind him or not.

Just as things can't get much weirder, Gillis finds out that his wife has a book on "Witchcraft and Voodooism" and the lab report comes back on some skin scrapings taken from the sheriff's vehicle's front grill. The trace evidence from the collision with a pedestrian points to the truck hitting someone who had been dead for at least three months. Things that normally wouldn't add up are starting to make a hell of a lot of sense to the sheriff, and his wife's detached, almost stoned reaction to his anger and suspicion don't do much to reassure him.

From there, the bodies pile up one after another; at one point, things are moving fast enough that Gillis doesn't even realize he's talking to someone that died. Someone is killing and reanimating the people of Potter's Bluff, and the shocks to Sheriff Gillis' worldview aren't going to end with the realization that resurrecting the dead is possible. In a subtextual echo of George Romero's horror movie philosophy, the returned dead are only doing what they must. It's the living that are the only ones capable of truly being monsters...

This is the cinematic equivalent of the Minutemen or Camper Van Beethoven for me; those are both bands that I should like but they just don't do it for me. You can't control an aesthetic reaction, so that's neither right or wrong. It merely is. And just like the artistic output of those two groups, this is a work that I should dig a lot more than I do. The screenplay has plenty of setups and payoffs to increase the tension, fantastic Stan Winston makeup and puppet effects (other than the completely regrettable fake head when the doctor is acid-burned to death) and the film takes time to breathe rather than jamming everything into a Big Event Pileup at the end. California stands in extremely persuasively to the north Atlantic coast and the performances range from substantially-above-adequate to pitch perfect. There's plenty of creepy long scares instead of LOUD NOISES and jump cuts (watch for the dark shapes outside windows when the night and fog make it much, much more frightening to see someone standing outside a house). Am I glad I saw this one? Certainly. Will I watch it again? I don't think that's particularly likely.
Posted by Tim Lehnerer at 7:00 AM