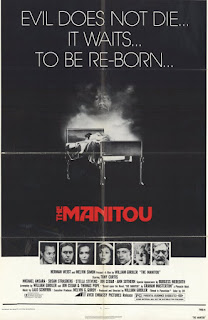 Based on the novel by Graham Masterton

I just loaned The Cabin in the Woods to a coworker, and in describing it, I said "Stop me if you've heard this one--five college kids go to a cabin miles from the middle of nowhere where there's no phone service." Before I even finished the sentence she said "They split up to get drunk or high and nobody brings a flashlight". She was right, but that movie played with horror conventions in an exceptionally fun and interesting way and seeing the cliches coming was half the point of the film.

I mentioned that so I could say this:  If you were to give the plot of The Manitou the same treatment, nobody who hasn't already seen it could stop you because nobody has heard this one before. But just in case, here we go:  A fraudulent psychic's ex-girlfriend is growing a tumor on her neck that turns out to be a fetus at first, and then a fully adult reincarnated 400 year old medicine man who wants to play lethal Pokemon against American civilization for killing his tribe off in the 1600s.

See? Nobody out there has heard this one before. Think you're ready for the crazy? Here comes the crazy.

We get dropped in the middle of things pretty rapidly and without a hell of a lot of setup, with Karen Tandy at a doctor's appointment at a San Francisco hospital where she's complaining about a growth on her neck, three days old, with something inside that seems to be moving several times a day. She seems really unconcerned about how unbelievably odd that is; her doctors, out of earshot, discuss the total impossibility of the X-ray evidence before their eyes--it's a fetus growing in the utterly wrong place on her body and surgery is scheduled to remove it the next day.

Meanwhile, somewhere else in the city, Harry Erskine is a bachelor who wears a fake moustache and silly Zodiac robe while reading Tarot cards for old ladies who have more money than sense and who think that a quick peek ahead for the next week is helpful (which it might actually be, come to think of it, but Erskine's pretty much openly full of shit). He gets a call that he wasn't expecting--some psychic he turns out to be--from Karen, who turns out to be an ex-girlfriend; they reconnect personally in the face of the medical crisis that Karen's facing down and take an obligatory streetcar trip while catching up with each other (I like to imagine they pass the flower shop from The Room's single goofiest scene during this section of the film). One quick getting-caught-in-the-rain (doesn't this psychic see anything coming?) later and they're reclining by the fireplace in Erskine's swinging bachelor pad. Harry decides to do a quick Tarot reading (which he pronounces something like "tahrrow") and gets the same hand twice in a row. Since it's an occult horror movie it's the falling tower, the moon, the Devil and Death. Three disastrous omens and a satellite.

In her sleep, Karen mutters something that sounds like "Pana Witchie Sallatoo" and in the morning she goes off for her surgery. Erskine returns to do another reading for another daffy old lady, and of course everything goes perfectly for both of them.

Like hell it does. The surgery is cancelled when one of the doctors cuts into his own hand and then gets a telekinetic judo shove from Karen's passenger. Meanwhile, across town, Mrs. Herz (pronounced "Hearse" in a bit of sick-joke foreshadowing) shows up for her reading and acts like some kind of Benny Hill sketch old rich lady before having some kind of seizure, screaming "Pana Witchie Salatoo" and then levitating down the fucking apartment hallway before a fatal stair fall.

Fans of puzzling editing and acting choices will find much to love in this scene; Lurene Tuttle's performance as Mrs. Herz is pitched so oddly that I don't know whether or not it was supposed to be funny either before or after her possession / seizure and slo-mo shot of Tony Curtis running down the hall in panic is intercut with regular-motion shots of an old lady's stunt double wrecking the bannisters on two flights of stairs.

Harry consults Karen's doctors about the weirdness surrounding her case, and makes a oddly persuasive case for something supernatural being the cause of all the things that have gone strangely:  he's a fraud and knows how to fake a ghostly visitation, and none of the things he knows how to do are happening. The doctors are willing to admit that a lot of uncanny things have been happening with Tandy's neck-fetus-tumor but blow Erskine off about as politely as anyone could hope for. Rather than mope and fret, the fake psychic calls in a real psychic that he knows for a seance (this scene concludes with my favorite terrible superimposed lightning bolt in all of cinema history). Before the wonderfully crappy lightning bolt breaks the seance table, a man's head extrudes from the tabletop and in the aftermath of the summoning, everyone agrees that it looked like a Native American. Given a clue to the identity of Karen's tormentor by the power of racism, Erskine schedules a meeting with Dr. Snow, an anthropologist who tells everyone that magic is bullshit for the first half of their conversation and then switches gears to say that a Native American shaman from 400 years ago would be an unstoppable magical force because nobody in modern American culture would have the skills to stop him. We also learn what "Pana Witchie Sallatoo" means--it translates, according to Dr. Snow, to "My death foretells my return". Which it would kind of have to, wouldn't it? You can't return from the grave without spending at least some time there.

Fortified with lots of new information, Erskine travels to South Dakota to find one of the only two remaining medicine men in the world (I think--the dialogue is kind of unclear about this when the white people are discussing their options and Singing Rock says he's heard Harry talked to five medicine men already), and John Singing Rock agrees to take the case for two pouches of pipe tobacco for himself and a massive donation to a college fund for Indian students. Harry springs for the tobacco, Karen Tandy's parents make the charitable donation and John Singing Rock brings his medicine bag to the hospital to try and exorcise the reincarnating medicine man from Tandy's neck fetus (the second attempt to use surgery got called off because the surgical laser started wrecking all the equipment in the operating room). There's another exposition dump here that says every time a medicine man dies and returns he becomes more powerful and the parasitic one is certainly stronger than Singing Rock can fight without help from the spirit world.

Once John Singing Rock shows up at the hospital, the third act can begin and things get seriously loopy. First up, the medicine man draws a circle around Karen Tandy's bed (which looks a hell of a lot more like a C than an O because he stops at one wall's edge. Nice job screwing up the ritual, jerk). Misquamacus, the evil medicine man, is reborn as a deformed adult (the diagnostic X-rays having killed the stem cells that were going to be his legs) and a potential lookalike for The Room's Tommy Wiseau. For the final 25 minutes of the film, it's a rear-guard battle where John Singing Rock tries to minimize the damage to the hospital (and then the world, after Misquamacus gets serious). It's a long slog to get here, but I love the way William Girdler spent every penny he had to show the fight between Misquamacus and John Singing Rock; there's a lot of stuff that happens (including but not limited to a see-through lizard spirit eating a doctor's hand, the entire floor getting turned into a Doctor Zhivago style ice cave, the decapitation of a redshirt nurse in a manner that shows The Omen was a big hit, and eventually the howling void of outer space, where ultimate evil is represented by a slightly hard-to-make-out shot of an eyeball). It turns out that nothing Singing Rock can do will stop Misquamacus, but the evil medicine man is unfamiliar with four centuries of technological advancement, and even something like a typewriter has a spirit inside it. The spirits of Whitey Science are pitted against the ultimate evil (that eyeball I mentioned a little earlier) and you get a Star Wars-ish effects sequence without the resources or talent that George Lucas marshalled so well before an ending with the inevitable sequel setup (which has never happened; I have one friend who said he hoped the series finale of House would be an updated adaptation of this story).

I'm not sure why I dig this movie as much as I do--like Gymkata, it's a cheaply made story that can't really chew everything that it's bitten off, but the characters are sympathetic (science, spirituality and flim-flam working together to accomplish a goal gives it a sort of Destination Moon vibe even when things are getting absoludicrous). And that premise is literally like nothing else I've ever heard of. The book was apparently a big success in the small pond of paperback horror; there were half a dozen printings of the first book and four sequels (some in hardcover!) where Misquamacus and Harry Erskine face off against each other again and again, with Erskine making it through by the skin of his teeth and the Indian magician vowing to return again.

The late 70s were no stranger to body horror in film (the literally visceral traumas in Dawn of the Dead, David Cronenber's The Brood and a little art film called Alien all did their own parts to make audiences scream with the thought of hitherto unimagined bad things happening to their bodies); my guess is that the ability to make foam-latex special makeup effects made it possible for directors to do things that had never been attempted before. Alien is a film only three years younger than I am, but I bet when you read that title you remembered the chestburster scene in living color and stereo sound. And if you remember those body horrors fondly, why not check out the movie that serves as the genre's semi-stoned kid brother? It's slow and talky in a late-70s kind of way, but there are sights in this flick that nobody's shown before and probably never will again.
Posted by Tim Lehnerer at 9:27 PM