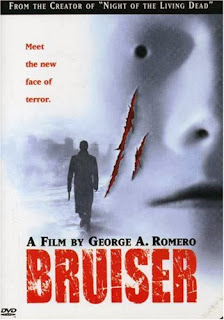 Written and directed by George A. Romero

It's been three weeks since I finished up HubrisWeen; in that time I was laid off from my job, my car was hit by another driver while I was stopped at a Yield sign, I spent six days trying to talk to a human being at the Michigan unemployment office and the body shop that I made an appointment to get my car fixed told me that my ride was totaled, then that it wasn't, then that it might be, but at any rate they've had the car since Monday of last week and haven't started fixing it yet.

So I'm in the mood for a movie about a frustrated guy breaking things. And even better, it's the last George Romero movie that doesn't feature zombies. I've always enjoyed his social commentary as much as (or more than) the horror elements of his movies.

Henry Creedlow is one of those pushed-around mild men that you really only get in fiction meant to tell men that they're being pushed around by an unfair world. His wife treats him with undisguised contempt, his oversized and underfinanced house is in the middle of a never-ending renovation and construction project, his boss at Bruiser magazine is a hypermasculine, bullying lunatic that delights in both insulting and humiliating his employees. Creedlow's best friend (and financial manager) is a money-obsessed smirking asshole who gives him some bad news on an investment just as the viewer watches him go in to work. He bears up under all these varying burdens, possibly not even noticing just how many of them there are, but saying he always expected to be getting more--specifically out of his bad investment, but one can also assume he's saying that about his life.

So far his only reaction to this series of pressures and failures is the occasional Walter Mitty fantasy of homicide or suicide, but things change soon enough that allow Creedlow to perform a series of self-actualization exercises and also kill a lot of people.

His boss throws a barbecue and party where his wife starts an art project--every guest gets a blank white plastic mask cast of their face, and they're supposed to decorate it so that even with a blank, near-featureless visage other people will know who they are. Creedlow tries to be a sport about it, and seems to genuinely like the idea. But he can't think of a single thing to do to paint or draw on the mask to show who he really is underneath it all.

The next day he wakes up and his own face has turned into the blank mask. It's his actual skin--it can bleed and it hurts when he tries to peel it off, but it's also not going anywhere and Henry's got to figure out why it happened and what to do next; it's entirely possible that it's never going to change and that he's stuck as a blank on the outside as well.

Right around the time Henry's figuring out that his face is a chalk-white blank with tiny pinholes for his nostrils and eyes his maid shows up to chastise him for leaving the garage door open and steal some money and silver candlesticks; he smacks her with the table decoration and kills her. This is the first scene where his homicidal urges are real, and Creedlow spends some time trying to snap himself out of the fugue state he thinks he's having before realizing that he actually did kill someone.

And from there we have the usual wronged-man-gets-revenge plot. Hiding out in his house just after killing his maid, Creedlow hears his wife on the phone with whoever she's using to cuckold him. Turns out it's Milo Styles, his boss from the Maxim-ripoff magazine that was steadily eroding his soul in exchange for a paycheck. Styles' wife gets a photo of the couple in flagrante delicto and the viewer is treated to Peter Stormare in his underwear trying to talk his wife out of getting a divorce while she's already in the elevator leaving. Creedlow tosses his wife out the window with a heavy-duty extension cord around her neck; we see Stormare's disbelieving face in this sequence as well as the

And from there Creedlow sets his sights on the other people who have wronged him (his best friend's been stealing from him under cover of his financial planning); as he works his way through the list he starts to disguise the blank white mask. It's a neat way to show him progressing through the kill list; the more people he murders to get his life back, the more he looks like himself. By the time the Misfits concert takes place and a laser beam punches through Styles at his own big impressive party (shades of Edgar Allan Poe's "Hop-Frog") Henry Creedlow is pretty much back to his own look.

There's glimmers of wit and insight here (and I completely forgot the "I am Spartacus!" riff at Styles' party that provides enough confusion for Creedlow to get away), and the blank white face and the alterations that Creedlow makes to it as the film progresses are striking.

But what the film really comes down to is a rich white guy with a white-collar job who wants to strike back at the people he views as the problems in his life for not doing what he wants. It's like Ayn Rand wrote the treatment for a horror movie and the subtextual qualities of the story ("I need to kill because I'm not appreciated enough") mesh incredibly badly with Romero's usual left-wing point of view. It's too bad, because Romero's always been a filmmaker who comments on how things are going in American culture through his horror films. I think he got this one just about entirely wrong.

It's been several years since I last saw this movie, and I think it's probably the least sophisticated political text I've seen from Romero; it's also aged pretty badly since 2001. In an age of the Nice Guy bemoaning his life and lack of success on the internet, it turns out I don't need to see it in a movie. And that's really too bad. The performances are nice (Jason Flemyng in particular is great at the put-upon Everyman who gets a supernaturally powered chance to amputate everything he doesn't like in his life), the color palate (a room full of Bruiser employees wearing identically dark-grey suits at an early production meeting; the colorful masks on display at the barbecue) is interesting and the repeated montage of Creedlow in the morning--once to establish his routine and once to break it with the reveal of his mask face--is a nice touch. But it doesn't really add up to a hell of a lot in 2013, I'm afraid.

I've been a fan of George Romero's work since middle school. I loved Dawn of the Dead more for its political message than its zombie-fueled carnage even when I wasn't old enough to have a drivers' license. But with this film his usual methods and interests and some regrettable subject matter add up to a whole that is rather less than the sum of its parts.
Posted by Tim Lehnerer at 6:06 PM