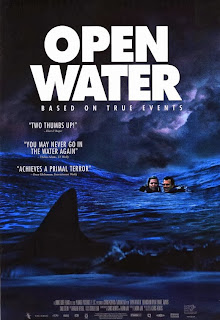 Written and directed by Chris Kentis

About twenty years ago there was a technological change in moviemaking that's been about as sweeping as the one that went from silent film to sound, or from black and white to color. The equipment needed to make a movie got cheaper and smaller, while at the same time video got to be high enough quality that films didn't need to be on film any more. At the same time, there was a generation of film enthusiasts raised with the VCR as a common household appliance--instead of needing to go to a revival house or catch a movie on the late, late, late show it was possible for someone interested in film to see five hundred movies a year. The archetypal example of a filmmaker with this creative background would have to be Robert Rodriguez. His El Mariachi was famously made for seven thousand dollars with a cast and crew made up of the friends and acquaintances that Rodriguez could talk into helping him work like a dog for no money until the film was completed. When the movie got picked up for studio distribution a few hundred thousand dollars were spent cleaning up the print and soundtrack, but he did make a film start to finish (with Herculean effort) for a budget that even Roger Corman would find miniscule. And when he made it big in Hollywood, it was a signal to hundreds of other movie-store brats that all it takes is superhuman drive, focus, talent, luck and more money than people can generally raise on their own to be an overnight  success in movies.

Which brings us neatly over to today's film. It was shot without a crew on location in the Atlantic Ocean, if you can believe that. The writer/director and his wife are the only production crew members listed in the credits. There's no lighting or sound staff credited, although more than a dozen post-production sound staff are listed. It appears that what you see is more or less what you get in this one.

The film starts with Susan and Daniel going on a scuba diving vacation to spend more time with each other; like a lot of people, their jobs demand a hell of a lot of their time and energy and synchronizing their schedules is easier said than done. Once on the Caribbean island they see the sights, take some pictures, buy some souvenirs  and then wake up way the hell too early the next day to go out on a dive; they both took the time and effort to get certified before the vacation so they could see the wonder and majesty of the ocean.

They're about to get a hell of a lot more of that than anyone could have ever wanted.

At first it's just the little things that go wrong on the boat--one diver forgot his mask on shore and has to stay on the boat (I doubt he can get a refund, which can't help his mood). Nineteen people jump into the water out of the twenty on the boat. One of them can't dive because her ears are blocked and won't clear, so she and her dive partner get back on (that's three tally marks on the head count sheet). The guy who didn't have a mask borrows the sick diver's gear and gets to do a dive, which makes him so happy you pretty much forgive him for being an asshole about something that really was his fault. And since the tour company doesn't allow anyone to go down alone, the sick diver's friend jumps back into the ocean so he can get a dive in as well. So, for those of us keeping score at home, there's one person on the boat, nineteen in the water, and two more tally marks on the head-count sheet than customers on the boat. It's a crowded deck and a pretty loose and laid-back crew so nobody notices at the time.

Which means that when Daniel and Susan resurface at the end of their dive, the boat has left (they did the responsible thing by checking the tally sheet before leaving, but didn't notice that two air tanks and two divers were missing). It's a minor slipup, but one with far-reaching consequences for our protagonists.

And from this point on (the last fifty minutes of an eighty-minute movie), it's essentially a two-person show. Over the course of the morning, Daniel and Susan come to accept that they've been abandoned accidentally. Which doesn't make it feel any better for them, of course. They're stuck an hour or so away from shore by boat, have no food or fresh water, no way to communicate with the outside world, and can't even stay in one place because an ocean current is pushing them in a direction they don't even know. The sky is heavily cloudy so they can't even make a rough guess at direction from the sun and swim anywhere.

Over the course of the narrative things just keep getting worse for the couple--it's cold enough to make them uncomfortable and the salt water isn't doing their skin any good. There's a fantastic shot of the two leads' heads bobbing in the ocean, with the sea and clouds filling the screen from edge to edge and top to bottom. Even with the decade-old digital video blown up to fill a movie screen that must have looked Lovecraftian in its dread.

While bobbing helplessly in the ocean, Daniel and Susan see what they think might have been a shark pass by, and then what was definitely a shark pass by. Using half-remembered trivia from Shark Week on the Discovery Channel the pair manage to calm themselves down and float rather than splash--it seems to work and the sharks eventually go do something else somewhere else. It's a big ocean.

Some time later Susan feels a sharp stinging pain; Daniel gets one a moment later. They've drifted into a jellyfish, which reacts the way a jellyfish does when it's provoked. Susan's motion-sickness medication wears off. The sun beats down, but not enough to let them signal a distant boat with flashes of light off their mask lenses. They're doing everything they can think of in order to increase their chances, but nothing pays off. After several hours of anxiety, they drift off into an exhausted sleep and wake up a couple hundred yards away from each other--if either one thought things couldn't get worse, waking up utterly alone would handily prove them wrong. They reunite, still two tiny figures dwarfed by the ocean every time they're in frame.

Oh, and then the sharks come back. Daniel gets a pain in his leg--not the one that was stung by the jellyfish earlier--and Susan goes underwater to see what's the matter. He's got a bite mark, and the wound is bleeding into the ocean. She ties her dive belt around the wound to try and keep it closed, and the pair decides to swim towards a buoy they see in the distance--at the very least, it's a marker they can stay with and be in one location when the search party starts looking for them. Or perhaps a passing ship will come close enough for them to signal and get rescued.

As the sun goes down (painting the entire ocean red with reflected light, in a montage that is beautiful and terrifying at the same time), we get a look back at the island, with hundreds of people drinking, dancing, having dinner and enjoying themselves. Out with Susan and Daniel, the dark closes in and lightning flickers, sporadically illuminating the night as sharks close in again.

The next morning, the tour guide from the dive boat finds Daniel and Susan's dive bag on the boat (almost a full day after they were accidentally abandoned). The search starts immediately, with helicopters, boats and planes searching the area where the pair might well be found. It's too late for Daniel, who succumbed to his injuries over the night. Susan is utterly alone, and sees no sign of help to the horizon in every direction. Sharks drag Daniel's body under the surface and Susan decides to do the only thing she can to take control of her situation. The ocean is utterly empty, the surface undisturbed by the two lost protagonists. Fade to black.

It's probably true that anyone making this movie would have had a gripping narrative (it's hard not to sympathize with two monstrously unlucky people who have hours to contemplate their doom), but the movie is actually very well made to go with its can't-miss premise. There are fantastic shots of Daniel and Susan adrift, with nothing in any direction where they're tiny specks on the screen; part of that is just the reality that someone floating in the ocean is just going to be a head and pair of shoulders above the water, but part of it is the skill of Chris Kentis and Laura Lau (the cinematographers, camera operators, directors of photography, and probably caterers and boat pilots for the production). The shots of Daniel and Susan lost at sea contrast neatly with the shots of them on land, where their bodies and faces fill the frame in closeup. It's a deliberate choice to frame the shots that way, and it means that after such closeness and intimacy the shots of them stranded in the ocean are even more affecting than they ordinarily would be.

Both lead performances are seamless; both actors don't seem to ever let their egos get in the way of their acting, and both are instantly and totally convincing as they argue, make up, cry, despair and hurt during their ordeal--special note to the makeup job as they get sunburned and wind-chapped over the course of the film. Like the stubble on the male actors in Cube, it's a well-done way to show the passage of time.

Of course there was a boat nearby while the narrative ordeal was taking place; the two character are on camera, after all. Someone's recording the film and obviously both actors are still alive. But the movie works so well that the viewer can very well forget they're watching a film until the score or a cutaway to the island reminds them of the narrative. The shark footage is also extremely convincing, because there aren't any fake mechanical sharks in the movie. My guess is that they filmmakers just used the best shark footage that they wound up with, cutting it in to the narrative scenes as necessary. There's one fantastic jump scare where Daniel ducks under the water to see what's happening and the head of a Great White fills the screen almost entirely. I don't care that both shots could have been filmed a month apart in different time zones; I jumped.

The director's only made one film since 2003; it's a horror movie presented as if it was filmed in one huge, continuous take. It looks like the challenge of filmmaking motivates Chris Kentis, and he likes to have a nice solid gimmick before doing another film. I find myself hoping that he gets his hands on an affordable 3-D camera, or maybe gets access to a greenscreen studio. I'm looking forward to the next thing he tries, and wondering how he'll choose his shots for effect the next time. He certainly knocked it out of the park with his man-versus-nature film.
Posted by Tim Lehnerer at 7:00 AM