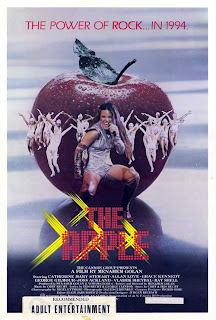 Some times you don't see it coming. If you had shown me The Apple first, I would never have guessed that Menahem Golan and Yoram Globus would go on to give the world Chuck Norris at his least vincible, half a dozen breakdancing and Lambada movies, and the craziest-ass ninja movie ever released. And yet this is indeed the debut feature from the Go-Go boys, the living avatars of Cannon Films, the dual spirits of the VHS-era B flick. However, Golan and Globus being who they are, it is a quickly made ripoff of something more successful. After Saturday Night Fever and Thank God It's Friday were financially successful (with Donna Summer winning an Oscar for "Last Dance" from the latter film), a whole bunch of bottom-feeders and B listers wanted to get a piece of that action as well as some actual studio producers. That hunger for the disco dollar gave us the Great Disco Musical Fiasco at the end of the seventies, wherein Can't Stop the Music, Sgt. Pepper's Lonely Hearts Club Band, Xanadu and today's film were all released in relatively quick succession to critical derision and audience hostility. Admittedly, the 70s weren't quite dead at the dawn of the 80s--I've been known to refer to the start of the decade as "nineteen seventy-ten" when talking about the trends that weren't quite dead--but like any other fad, disco had its underground success, its popular phase and its ebb tide. Unfortunately for Hollywood and the indie producers working on disco musicals, movies take a long time to write, shoot, edit, market and release. The massive supply and lack of demand suggests a shipment of Members Only jackets hanging lonely on a clearance rack at Woolworth's in 1991.

The film itself takes place in the (then) future of 1994, where people have baby buggies with clear plexiglass domes to protect their kids (from pollution? Maybe; the film never really says), and just like we had in the real 1994, disco has been ruling the airwaves for a solid fifteen to twenty years (I will let you imagine some kind of Village People take on "Smells Like Teen Spirit" now, just to hurt your feelings.) The Boogalow International Music competition is showing a gigantic song production that comes across like a Nuremberg Rally musical number of call-and-response chants between the band and the audience. They're either chanting "B!" "I! M!" to each other as a literal shout-out to Boogalow International Music or it's some late-seventies self-actualization horseshit in which the band shouts "Be!" to the audience, who then affirm "I am!". Or both at the same time. It then segues into the chorus "Hey, hey, hey! Bim's all the way!" about fifteen thousand times. This band--Pandi and Dandi--are being monitored by Mister Boogalow personally from some kind of high-tech Audience Emotional State Divination Chamber. Boogalow, incidentally, is rocking a plum-colored tuxedo jacket with wide triangular lapels and that's about the most sedate thing he or anyone else will be wearing at any point for the rest of the film. Any time I describe a character, just imagine they're wearing a disco nightmare that would embarrass Cher and you won't be far off.

After the Disco Audience Chantathon mercifully ends, the next band is Alphie and Bibi from Moosejaw (Boogalow:"Moosejaw?" Someone else: "Moosejaw."). They're a retro act (especially if disco has been topping the charts for more than a decade and a half at this point), performing as folk-flavored love duet that wouldn't be out of place in a hippie summer camp. Alphi reveals himself to be a phenomenally talented guitarist in this number, since the song has a string section, drums, bass and rhythm guitar in it but it's just two Canadian doofi wearing puffy shirts on stage with one guitar. The audience turns out to really like the low-key sincerity on display and the folk duo scores a higher score than the previous disco spazzout. Boogalow's right-hand man Shake plays a red tape over the concert hall PA that sounds like a hearing test; it breaks the folk spell and Alphie and Bibi lose the competition.

But Boogalow has no problem with people wanting to listen to nostalgic folk-flavored love songs. He just wants to make sure he gets his pound(s) of flesh when it happens. He offers the kids a contract and (after two more song and dance numbers) Adam--sorry, Alphie--and Eve--whoops--Bibi are in his office as he promises them the world if they'll only sign a 500 page contract without reading it (actually, I hear this is SOP for any record label, not just the ones specifically controlled by Satan).

At this point we get our first real taste of how uncontrollably whackadoo the film is, as Alphie gets the pen in his hand to sign the contract and then hallucinates a massive storm, an earthquake, and his literal descent into Hell as a chorus line of demons or damned souls back up Pandi as he sings about taking a bite out of "the apple", and hey, there's our movie title! Everyone flings themselves about with vigor and abandon and the "Adam and Eve are tempted by the snake with the apple" metaphor is just dragged out behind the barn and beaten to death with a shovel. And then beaten some more, in case it might move again.

Back in the corporate office, Alphie refuses to sign so Bibi splits off from him and becomes a leather-clad pop singer who has a truly mindbending song with lyrics equating American energy policy with fatal amphetamine addiction and backup dancers who look like leather-daddy bikers on plastic motorcycles (I'm sure you remember that song from the future of 1994). Her career rises, Alphie's stagnates and there's one of those duets where both people are miles apart singing out of open windows into the rain. Also, Alphie's landlady is played by Miriam Margolyes in this sequence. She went on to be Professor Sprout in the Harry Potter films. Never let it be said that appearing in The Apple was a career-ending decision (though George Gilmour has never been in anything since, and he's the male lead).

Somewhere in this mess we get the single least thought out musical number in the whole stupid movie (and, of course, my favorite one). It's called "(I Know How To Be) A Master" and it's about how the world is a plaything for Satan (or perhaps the Antichrist; either way it's the villain song for Boogalow). And somewhere along the line somebody thought it would be a good idea to give the middle-aged Jewish character actor a reggae track to sing. Which he doesn't even do--he just talks the lyrics. Meanwhile the staging is actually well thought out and shows the total sang-froid with which Boogalow walks the earth as his (barely figurative) slaves sing about learning to love their pain because he's just that good a master. He is such a great master, as it turns out, that he takes over the world government during a jump cut and is now the undisputed ruler of every man, woman and child on Earth. His reign is marked with things you would recognize if your environment had a bunch of Protestant eschatological bullshit in it like mine did when I was growing up--a mark that must be placed on the hand or head in order to be able to buy or sell anything, required exercise programs every day (Glenn Beck's book Agenda 21 updates this End Times nugget by making people ride exercise bikes to generate electricity for the One World Gummint 32 years after The Apple hit screens, but I remember hearing people say that if the Soviets took over America they'd make everyone do exercise for hours every day back when I was a wee sprat).

Alphie runs back to Boogalow's compound to win Bibi back, gets roofied, sleeps with Pandi during yet another musical number ("Coming for You", which gives us a rare example of a single entendre observed in the wild). But eventually Boogalow's minions turn out to be defenseless against the Redemptive Power of Troo Luv and Alphie runs off to Central Park to live as a hippie with Bibi (and after another timeskip that the movie utterly fails to signify, their infant child). The only thing that could save the last holdout of non-BIMmed humanity would be a ridiculous deus ex machina...and lo and behold, we get one to show up! Literally! It's the Rapture in which God drives a Bentley and the filty hippies have to walk.

This particular movie seems to have been designed to have no natural audience whatsoever. As El Santo points out on 1000 Misspent Hours' review of this stinkburger:


"At the time The Apple hit the theaters, disco was already entering its death throes; hippies were culturally irrelevant throwbacks who had more in common with Cheech and Chong than with the pop messiahs of the late 1960’s; New Age religiosity was on the wane, retreating before the rising tide of evangelical Protestantism. In short, this was a movie with no natural audience, which tied into no major trend except the tentative resurgence of the musical, and which seems calculated to alienate anyone who would have gone to see it when it was first released— after all, the disco fans who could be expected to appreciate the bulk of the innumerable musical numbers might well take exception to being told that they were really the Devil’s dupes, while the last straggling hippies who might appreciate The Apple’s affirmation of their ghettoized and moribund counterculture would surely never go to see a disco musical in the first place!"

But even though most of the predictions were straight from the Late Great Planet Earth prophecy-by-numbers kit, the film did foresee the rise of the fundamentalist mockbuster. The Left Behind series had one movie in theaters and several sequels and spinoffs that went straight to cable and DVD. And of course, the first Left Behind book (of an eventual sixty-three) was published in 1995, just one year into the reign of Mr. Boogalow in the future of 1994. There's something about the end of the world that just seems to keep coming up again and again with different prophets looking at the same book and saying that it's taking place right this very second. And just like every other prediction of the end of the world, it hasn't happened yet and never will. But there will always be a great deal of money to be made keeping people spooked about the possibility that it's the end times. In this way, Golan and Globus made a fatal error--they seem in every frame of the film to genuinely care about their message, even if they don't really know how to articulate it. The real pious frauds would be the ones turning their trilogy into a 12 book series while still saying that it was a dire warning that could come true any second now, or the ones who Ctrl-F the word "Soviet" and put in "Muslim" in their old Rapture warning books because the world moved on and with the loss of the USSR we also have the loss of the place everyone warned us the Antichrist had been born. The Cannon films boys decided to leave the religious-themed stories to better bullshitters than them, and that's why we got Death Wish 3 from them instead of an updated If Footmen Tire You, What Will Horses Do?. Truly, we live in the best of all worlds.