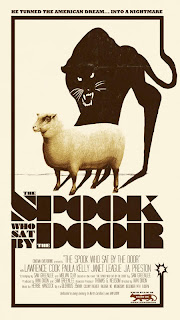 If you're the same age I am, you remember hearing joking references to Pravda, the official newspaper of the Soviet Union. Things like the race between an American car and a Russian one, with the Russian car placing second in this race and the American one coming in next to last (which is the best face you can put on losing a two-car race if you're writing for the Politburo). The subtext to all of those jabs at the Soviet propaganda machine was that the American one would tell the truth rather than conceal it or hide it because we were righteous and brave and true. That went doubly true for official government censorship and monitoring of undesireables ("In Soviet Russia, radio listens to you!"); in America, the government wouldn't confiscate a movie and have every print destroyed just because it was an embarrassing political hot potato.

In the USA, our corporations handle that kind of job. The only reason anyone can see this week's movie is that United Artists overlooked a negative of the print in their studio vault when they recalled every print of the movie from circulation and destroyed them. This film was considered so incendiary that the studio would rather write off the entire budget as a loss and set the prints on fire than keep it in circulation where political undesireables might see it and get ideas. Actor, director and social activist Robert Townsend said in an interview that he saw the movie during its original release on a weekend, told his friends at school about it Monday, and that it had already been pulled from theaters by that Tuesday.

When a nameless Senator decides to buff up his credentials for re-election and try to improve his standing with the black community, he accuses the CIA of being discriminatory and demands they hire a (single) black agent in order to provide an integrated espionage force. The CIA responds by taking a bunch of black candidates in and testing them so thoroughly that none of them will pass all of the requirements. This works perfectly for every candidate except Dan Freeman, who is at the top of the physical class and works tirelessly to stay on top of the required academics, even to the point of not leaving the student barracks when the students are allowed out. The CIA testers forget he exists because they can't find anything wrong with his performance and the other students resent the hell out of him for screwing up the grade curve. The spies monitoring his activities on and off the training campus can't find anything wrong with his politics or activities, and they figure if the CIA is going to be forced into an integrated workforce, they can do a hell of a lot worse than an apolitical, mild-mannered judo expert who wears reading glasses.

And so, with a press conference that guarantees he will be forever useless as any kind of undercover agent, Freeman becomes the first black CIA agent. His deeply important job is to run the copier in the third sub-basement (it's probably actually really important to keep track of classified copies and documents, but James Bond doesn't change all the toner cartridges at MI6, now does he?). When he gives a tour of the agency's offices to some visiting VIPs (nobody else on staff wanted to do it), the section chief decides to promote him to "black guy on staff that can be seen by everyone who stops in" rather than "poor bastard stuck four levels down smelling mimeograph ink all day".

After five years of acting as a receptionist and copier guy for the CIA, Freeman resigns and goes to work in Chicago at a social services agency, openly telling his boss what he's about to do in the next phase of his life:  "Help my people help themselves--use what I've learned here." And what he's learned, as his various supervisors never really seem to remember, is quite a shopping list:  assassination, hand-to-hand combat, revolutionary cell management, counter-insurgency tactics and other methods of destabilizing governments. When he makes contact with the current members of a gang  he used to belong to, he gives them a tantalizing offer--how'd you like to make things really awful for the white man? What follows is one of the loopiest training montages ever filmed, wherein Freeman teaches street thugs and junkies to do all the things he learned in the CIA, with an emphasis on using existing prejudices as a homebrewed cloaking device ("a black man with a mop, tray or broom in his hand can go damn near anywhere in America. And a smiling black man is invisible,"). Watching these scenes in 2013 can be really, really uncomfortable for a white audience but they're central to the movie's power and to the story that it's telling. And besides, it's no more or less grating to modern sensibilities than hearing Ingrid Bergman ask "Who's that boy on the piano?" in Casablanca. It's just painful in a different direction this time.

One of the central scenes of the film follows--the lightest-skinned members of the Cobras rob a bank to fund the revolution, putting what they've learned into practice. They steal 300 grand while dressed in suits and fedoras, change clothes in their escape van, and listen to the radio describing a bank theft by "six men", not six black men. The cultural default is that a man is a white man; the authorities won't even realize who they're supposed to be looking for because they're blinded by the inherent societal biases that people with privilege may not even perceive. And using social bias turns out to be just as useful as judo when you want to redirect attention.

As the plan progresses, the underground army grows (the Cobras spread out to half a dozen cities to start their own revolutionary cells) and eventually it's time to make a move, raiding a National Guard armory in a logistically brilliant (and completely silent) sequence. And when the shit jumps off, the Chicago police used to cracking hippie skulls and beating journalists find themselves outclassed and outgunned by a well-trained army. It's also bad news for the forces of authority that Freeman realizes from before the start that he isn't going to win the war on conventional terms, but he can fight for years simply by not losing. And when a riot starts over a pretty bad police shooting of a drug dealer, things start to go from bad to worse to horrible to apocalyptic...

This movie is sort of like Red Dawn in that it shows the worst paranoid fantasies of the John Birch type of right-winger, but it differs in a few crucial ways. For one thing, it was written, directed, and acted by black artists rather than, say, a bunch of white people trying to pass judgment on class issues. Look at Do the Right Thing again and see how Spike Lee refuses to make anyone a straight-up hero or an irredeemable villain (to the point where even one of the police tries to intercede when Radio Raheem is being choked to death and Mookie is shown to be an almost completely absent father to his child); then watch Crash. One was made by a minority filmmaker with a minority viewpoint and concerns (it doesn't hurt that Lee had a magnificent cast and was working at the absolute top of his game); the other was written by a rich Scientologist with a mostly white cast trying to say that racism is bad. It's also a bit like Django Unchained in that the people who have been ground down for decades have decided that enough is enough and there's only so much a righteous person can take. Add in a funk-saturated, propulsive Herbie Hancock score and the prospect of race war and inner-city revolution has never sounded so awesome.

One of the reasons I started this blog was to hip my B movie friends to things they might never have heard of, or that they'd known about but never gotten around to watching. I hope that my readers (one in Brazil, which I can barely believe. Hi there!) might take this review as a reason to add this to the Netflix queue or pick up a used disc on Amazon. I realize that I'm a white guy writing about black issues from a position of ignorance and privilege. I hope that my genuine and deep respect for the film has come through in my writing, and I hope that I haven't done too badly in trying to show the artistic and political achievement of this unjustly neglected movie. It's a low-budget work of art and there's some legitimate talent in front of and behind the camera. It's just that whtie America was too cowardly to face the questions that the film raises and too scared to even look at the potential for inner-city race revolution in the guise of fiction. The novel was one thing, but making the story available nationwide for the price of a movie ticket was apparently quite another.

Don't worry. Next week I'm gonna watch either Red Dawn or Gymkata and make lots of cheap jokes about whichever one I pick.

In the end, I think the movie's 2012 inclusion in the permanent collection in the Library of Congress National Film Registry shows that we've come at least a little bit farther than we were forty years ago--the movie was always this good; only the social and political landscapes have changed. Instead of trying to destroy the movie and its message it's at least viewed as a cultural document and a glimpse of the way things used to be and the way people used to think. It's even up in its entirety on YouTube, at least right now. So let me conclude this review with the following statement meant for the United Artists board members that tried to suppress the film:  You lost. With the utmost sincerity let me add:  Fuck you and your plans for the future.
Posted by Tim Lehnerer at 5:10 PM