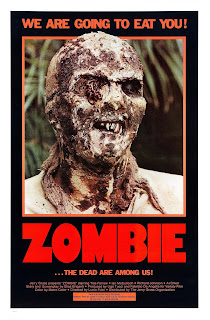 I can't really believe that I've gotten through all 26 reviews for HubrisWeen. When I started I was pretty sure I'd make it to about the H or I film and crap out. Thank you to everyone who has read these reviews (my hit count went from about 5 a day to 35, so there are some of you out there!) and thank you to everyone who shared the links or commented on my film criticism. Even the guy who told me I didn't like Gog enough, because he was the first commenter I've had that I didn't know in real life.

Next year, assuming I'm foolhardy enough to do this again, I'll take requests if I can. And now:  The Italian sequel to Dawn of the Dead released as Zombie in the States and Zombie 2 pretty much everywhere else in the world.

The first shot is a gun pointing at the viewer (way to get my full attention, Lucio Fulci!); a body shrouded in sheets and tied up to boot is trying to rise up from a hospital bed. It gets shot in the head and the man with the gun announces "Your boat can leave now," I'm assuming that is addressed to someone other than the gunshot victim.

A jump cut later, there's a sailboat drifting around the New York Harbor. The harbor police board the boat--it appears to be empty, but filthy--flies buzzing everywhere, clutter and trash all over the place, worms on a piano (...huh?) and a severed hand. While the investigating officers and the audience are trying to put all these pieces of information together, a fat guy jumps one of the cops and bites a chunk out of his neck. The other officer shoots the attacker half a dozen times; the assailant falls into the river and sinks like a stone.

Anne Bowles sneaks on to the boat; it was her father's and she's trying to track him down. He was on a sailing vacation but vanished for over a month. When she gets on board she finds a journalist, Peter West, is already there looking for a big story. He has absolutely no idea how careful you need to be when you're wishing for something...

West is a smug jerk, but he's willing to bring Bowles with him to find her father as he tracks down the stories--diary entries point to the uncharted island of Matul. Bowles and West find a vacationing couple with a boat that's willing to ferry them to that island, although the captain notes that Matul is not a cool place to hit. Hit it they do, regardless, after a topless SCUBA diving scene where the diver encounters a shark and then a stuntman truly earning Italian hazard pay for getting in a fight with the shark without exhaling and spoiling the shot with bubbles coming out of his mouth.

On Matul, the investigators find the nastiest hospital this side of Jacob's Ladder, with the doctor trying to find a cause or cure for a disease that makes people drool thick snot all over their chin and then die. And then come back. The doctor tells Anne that her father realizes he was infected and wanted to be used as a guinea pig so that the disease could be better understood; the flashback that accompanies this revelation is the scene from the start of the movie where the doctor re-killed a risen corpse.

The situation gets worse, but interestingly enough the protagonists are already pretty much doomed before they realize the real level of danger (the doctor's wife gets one of the most gruesome screen deaths of the 70s with the infamous splinter-to-the-eye scene). By the time they're all fully aware that the dead are returning to life they're surrounded and injured. For that matter, it turns out that the church they flee to is incredibly hard to fortify; Matul's building codes and tropical weather mean that the building is pretty flimsy and the undead get in rather quickly after everyone tries to hole up and stay safe.

Once the siege of the church gets going in earnest, the survivors have a truly awful choice of dooms--the firebombs work pretty well against the zombies, but now the aging dry wood building is soaked with burning gasoline. Not everyone gets back to the boat alive, and the captain is infected. The remaining survivors plan to use his reanimated body as proof of what happened on Matul, so that the mainland can be warned about what's going on. But way back in the beginning of the movie the dead cop from the first few scenes was on an autopsy table but still moving (not that the jerk doctor noticed); it turns out that Patient Zero was in New York City before Bowles and West even left for the island to try and figure out what was going on...

I'll admit it--my first impression of Italian horror was that it was shoddy and inept, and my second impression (when I watched Cannibal Holocaust for the first time) was that it was full of technical errors that five minutes' thought and effort could have eradicated. But this one shows me the error of my ways.

Fulci probably didn't have the biggest budget in the world, but he spent it magnificently--the final shots in New York City showing the scope of the infestation are chilling despite (or maybe because) the commuter traffic on the Brooklyn Bridge is still going on. It's like seeing a documentary of how the world ended. The script makes sense--it's got a constantly escalating threat and a the characters are always about a half a step away from being safe as well as half a step away from figuring out just how bad the problem is. The zombie makeup is pretty damn good for the late seventies and you won't believe the zombie-versus-shark sequence even after you've seen it.

The other thing I like is that the scientist trying to figure out what's going on is just as confused as anyone else--the doctor on the island even has a scene where he points out how little scientific sense the zombie plague makes even as he's desperately trying to unravel the cause of the risen dead. Add to that the creepy voodoo drums on the soundtrack (which I think are supposed to be diegetic) and the villagers on Matul that--for a change of pace--the doctor asks for advice. Fulci really caught lightning in a jar with this one, and I feel bad that I never watched it on VHS back in the day when I was trying to talk friends into renting horror movies in the long ago.
Posted by Tim Lehnerer at 7:00 AM