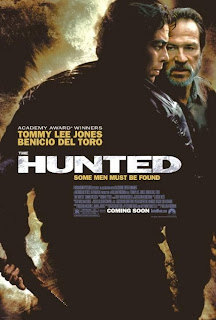 I seem to be reviewing idiosyncratic action movies here more often than I thought I would be when I started this blog. Maybe it's because so many examples of the form are so boring and formulaic that I can't help but notice the ones that weren't assembled completely from the discount shelf at the Used Movie Parts Store. Maybe it's a meaningless coincidence. I do know that I have high hopes for people Netflixing the movies I've decided to talk about if I make them sound interesting. So here's my five-second pitch for The Hunted:  Want to see a movie about what happens when Johnny comes marching home after his mind is shattered by what he's seen and done? And who do you call in to stop someone trained for a decade to evade capture and kill in secret?

The film starts with the kind of men-on-a-mission sequence that wouldn't be out of place in a Tom Clancy book (or a dire cinematic adaptation of same):  in 1999, four Special Forces operatives are in Kosovo, tasked with finding and eliminating a Serbian warlord that's been committing atrocities against Albanian villages. The soldiers use an airstrike as a distraction to sneak into the mosque that the warlord is using as a temporary HQ and one of them slices the warlord's throat half a dozen times; Sergeant Aaron Hallum is awarded the Silver Star for his actions on this mission.

But the mission is anything but a triumph in Friedkin's vision--the Kosovo sequences are shot at night with fire billowing into the sky from every building and human forms backlit by the flames to make it look like Hallum is taking a tour of Hell. Significantly, the first shot of the film is del Toro's eyes; the reverse shot shows what he is seeing, and it's a panoramic gliding-camera showoff shot of slaughter and destruction, with the Serbian warlord taken out but nothing done to save any of the hundreds of civilians that are machine-gunned while Hallum watches helplessly.

It's when he gets back to America that his damage truly manifests. Sleepless nights and dreams of the atrocities he witnessed compete for how much damage they can do to his psyche, and his personality starts to erode.

Meanwhile, in the snowy wilderness of British Columbia, L. T. Bonham--not that we know that's his name yet--is out in the woods following an injured wolf; he catches up to it, removes a metal snare from around its paw and rubs some kind of medicinal chewed-up plant on its injured leg. Our introduction to his character is complete when he smashes the snare owner's head into a table at a trading post and effortlessly stares down the biggest guy in the room (preventing a fight before it can even happen), then politely informs the hunters that wolf snares are no longer permitted in the area.

Four years later, two deer hunters in Oregon are stalked and killed by Aaron Hallum; he has a single knife and they both have rifles with scopes that seem far in excess of what is necessary to take out a deer. But in the close-in, mossy green woods favor the guy in the black fatigues much more than the ones in camouflage. (Later in the movie, Hallum says that the two hunters were sweepers sent to kill him since he went rogue; it's entirely possible that he's right. Both of the hunters are dressed and equipped identically but don't look related to each other at all. They use hand signals to communicate at one point rather than talk, and the hardware on their rifles looks more like the tools of war than something bought at REI and meant to bag a trophy.)

They track their quarry silently for a considerable distance and when one of them sees their target he says "I got him", not referring to their quarry as "it"--I choose to interpret this as further proof that they're sweepers instead of deer hunters. When Hallum taunts them, they both instantly pursue him rather than back off and when one of them gets a shallow but painful cut from Hallum's knife the other takes a shot at him without a word. It could be that they're just two hunters who bought their stuff at the same store and had the kind of bad luck that horror movies are made of, but the viewer can make the call either way and there's evidence for it no matter which side of the issue you come down on.

This scene and others set in the woods look amazing; I wish the film was filmed in 3-D because of the way the trees and moss seem to stretch out infinitely in every direction. People are filmed moving through the environment rather than having the scene blocked to keep them in frame and in front of all the various trees and branches. It's not the usual filmic choice, and I found that it added to the atmosphere considerably, with the setting and scene paradoxically seeming open and claustrophobic at the same time.

The hunters' bodies are found and Bonham is brought in to track down and bring in the killer, since nobody in the Seattle police department has the specialized skills that would let them go into Hallum's killing space and not die. He uses his unparalleled skills in the wilderness to tease out details from the crime scene and then sets off to find Hallum by himself ("If I don't come back in two days it'll mean I'm dead.") One of the standout sequences of the film follows, as Hallum spots Bonham, who found his hollow-tree hideout in the forest. They scrap, and the fight scene is the total antithesis of Matrix-influenced gravity-defying martial arts. It's two people trying to prevent each other from using a knife hitting each other in the knees and elbows until one of them drops; the fighters wince, get hurt, run out of breath and don't have time for any snappy rejoinders in the middle of combat. I cannot express in words what a wonderful change of pace this was in 2003. It still looks thrilling now, which is a lot more than I can say for any of the other fight scenes in American cinema around that time. Or, hell, even now.

Hallum is captured by the FBI in the middle of the fight while he's distracted, and then transferred to the CIA for reasons of national security. He escapes from CIA custody in an extremely budget-friendly van crash. He doses one of his captors with the suicide drug that they were going to use on him (one of the more horrifying details of the film, for me, is the extremely blasé way everyone treats the suicide-drug inhaler; they all know what it is and nobody's surprised to see it when one of the agents brings it out for Hallum to use) before disappearing into the crowd of gawkers around the wreck, and makes his way back to the big city, his personality dissolving into a state of nearly permanent combat stress where everyone other than him is a perceived threat that must be met with lethal force.

Bonham is the only person that stands a better-than-zero chance at finding and stopping Hallum, and the chase is on. The second and third acts of the movie are Bonham's pursuit of the homicidal soldier, with Hallum staying several steps ahead of the other tracker...then two...then one...and then the final confrontation between a man broken by his service to his country and the tracker and survival expert who taught him to evade capture and kill silently (intercut with flashbacks to the training sessions where the two characters first met, and featuring Tommy Lee Jones with a moustache that reaches the same Awesomeness Quotient as Willem Dafoe's haircut from Streets of Fire). It ends as it must, with the death of one combatant. Which one? Watch the damn movie.

There is a brief pause before the final fight, where Hallum forges a knife out of scavenged steel and Bonham chips his own weapon out of a piece of flint--both characters creating the tools of death that they must pit against each other. And during the last combat, both characters are still looking for ways for both of them to get out alive--it would be easier for both of them to kill than to protect; their skills were honed to end life instead of save it. And yet Hallum tries more than once to end the fight in a way that will let him run away while his mentor lives.

Special note must be given to Tommy Lee Jones' performance--he plays a man in late middle age who isn't magically invulnerable and who isn't correct by default every time he comes up with a theory. Watch the way he starts clenching and unclenching his hands in the FBI station and notice that he's more nervous and on edge when he's safe in the city (in the middle of a federal building surrounded by FBI operatives) than when he's looking into the eyes of a man that is going to try and kill him in a matter of seconds. He's terrified of heights, and makes his first impression on the FBI agents he's aiding by staggering out of the helicopter and throwing up twice. His character is a wounded man carrying his own damage from the past, and the events of the film won't be helping keep his conscience quiet at night at all. The female FBI agent and him talk for about twenty seconds about his past--in another movie it'd be the setup for the obligatory romance in which the love of a good woman heals the wounded heart of a warrior, but in this film they chat for less than a minute, mutually decide they have nothing in common and then get down to the job at hand. And that's what the movie itself does--not a lot of extraneous plot points, and not much else to do but pick a story and tell it to the best of the filmmakers' abilities.
Posted by Tim Lehnerer at 8:16 PM