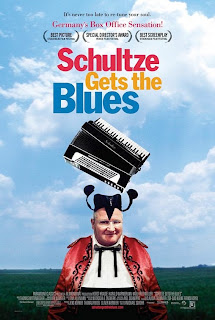 Written and directed by Michael Schorr

Take a look at the poster at the top of the page--it doesn't really tell you anything about the movie. Wacky late-middle-aged man in semi-ethnic looking costume, field that could be anywhere in the world, floating accordion. I don't want to cast aspersions on arthouse movie poster designers, but what the hell, dude? (I assume it was a dude who designed the poster.) If I hadn't read a review of the film I wouldn't have seen it in the theater ten years ago, and I sure as hell wouldn't have been tempted to check the movie out if I'd seen the poster before I read the synopsis. Thanks to Michigan being a cultural backwater, I got to read Roger Ebert's review out of Chicago long before the movie wound up on a screen in Royal Oak.

And I'm very, very glad that I found out about this one. Its plot is so simple that it could almost be boiled down to a haiku:  A recently retired polka-playing salt miner from Germany overhears a snippet of zydeco on his radio one night when he can't sleep, and it changes his life. He decides, with his own limited resources, to go to America and hear this music for himself.

That's it. But the film isn't about spectacle and it's paced for grownups who can watch a long take; it's the total antithesis of the blockbusters written to specification down to the screenplay page where each story beat is supposed to happen. It stars a man who is not exactly handsome, and the screenplay takes its time getting from place to place and from story section to story section. Where other movies chop their scenes into semicoherence, this film is content to let long takes play out and let the viewer put the pieces together on their own. It's so rare to find a movie that expects you to think.

So. Schultze finds himself retired (semi-forcibly, if I have interpreted the opening scenes correctly) and has all the time he could ever want to do anything. But in the town where he lives, there's nothing to do. It's so dull that even the wind farm turbines aren't moving, and at one point he mows his lawn while two other people watch him doing yard work. I don't know about you, but that sounds about as thrilling as watching someone else watch paint dry to me. So in a way the accidental overhearing of "Zydeco From 1988" is a much needed source of liberation for Schultze, although he doesn't seem to be capable of exactly articulating why it sets his soul free. In fact, it's so strange to him to feel joy and wonder that he talks to his doctor, wondering if a change in musical tastes is a symptom of something terrible.

But it isn't. It's just that he's an accordion player and has been for decades, with a particular polka that apparently was handed down from father to son in his family (and with Schultze being a bachelor, it looks as if that traditional polka will only last as long as his generation). And the scene where he starts copying the overheard song is one of the absolute highlights of the film. Watch Horst Krause's face as Schultze starts thinking about the old sound and the new, and see how wonderfully he underplays the revelations going through his mind. In this scene, as the polka sound is slowly eroded and replaced by zydeco, Krause shows you a human soul reborn into a world of thrilling potential.

And what's a brand-new zydeco enthusiast to do after he's made jambalaya for his two newly retired friends and tried out the new music in a stodgy old music hall (to the approval of about five percent of the audience)? Go to Texas, of course, to represent his little corner of Germany in a world music festival. And what to do when one gets there? Buy a boat, of course, and putter away through the Texas-Louisiana border in search of the swamp music sound that gave wings to his heart and soul when he overheard a snippet of it half the world away. There's a brief scene during this part where Schultze encounters a Czech polka band in Louisiana (which the filmmakers just stumbled over while location shooting); it's a great parallel to see Americans from the bayou in love with the Eastern European polka sound.

The movie's about finding parts of yourself that you didn't know were there, and revealing the capacity for joy, wonder and discovery. It's about seeing the depths that are there in everyone, whether they know it or not (at one point it is revealed that one of Schultze's fellow retirees owns a Superman costume and will put it on with five minutes' notice for the right cause). It's about the difference between what you wanted out of life and what you got--virtually every character in the film that Schultze talks to in Germany settled for something other than their dreams. His doctor wanted to sing opera; a waitress at his local cafe wanted to be a flamenco dancer. The son of one retiree wants to race dirt bikes (and is exceptionally bad at it the one time we see him compete). Even the guy stuck in a little brick building manually raising and lowering the train-crossing gate in town is studying alchemy. But when Schultze goes on his journey, he meets people perfectly content to be who they are, and who give him the space to be nothing but himself as he haltingly journeys through the Louisiana swamplands looking for the sound that made him hear a new world. It's about not knowing why you love what you love. It's about someone who heard a song that changed his life, which means it's about me. Thee film's got nothing but a gentle kind of love in its heart for the people who find themselves on strange journeys (in more than one way), and it even has affection and fondness for the people who can't understand what's gotten into their friend but are happy to see him happy.

It's all that and a police boat captain with the last name Kirk.
Posted by Tim Lehnerer at 10:30 PM