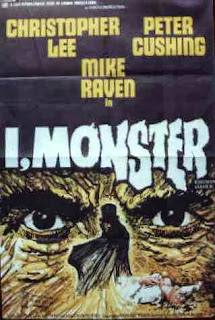 Screenplay by Milton Subotsky, based on a story by Robert Louis Stevenson
Directed by Stephen Weeks

There are fewer characters in fiction more dangerous than a mad scientist who thinks he's doing the right thing. About the only thing more lethal than a well-intentioned extremist is the proximity to Charles Bronson before he needs a motivating factor to clean up the streets. Today's movie is an adaptation of the Platonic ideal of a "he thought he was doing the right thing" story, based on (according to the credits) a story by Robert Louis Stevenson. I am unable to come up with a good reason why they wouldn't list Dr. Jekyll and Mr. Hyde by name in the credits, other than that the protagonist of this movie is named Charles Marlowe rather than Henry Jekyll and the cinema audience would potentially get confused by the different names.

The story starts in the late 1800s as Dr. Charles Marlowe makes his way through the streets to a club to hang out with other middle-aged stuffy upper class Londoners. When he gets there, everyone in his social circle is discussing the execution of a murderer and the nature of good, evil, human personality and societal pressure. Beats the hell out of fantasy football. Marlowe makes the bold statement that every human personality has a good and a bad side, and that it should be possible to separate the two. He's living in the golden age of scientific hubris and has no idea how far his reach exceeds his grasp in this matter; too bad for him and everyone around him. His ideas are shot down in the strongest manner possible for this time and place ("Come, come, now." from one grey-haired guy sitting on the same couch).

A sequence of Marlowe pouring liquids into beakers and mixing his formula is intercut with the peanut gallery talking about temptation and restraint and before too terribly long the scientist shoots up his previously unseen pet cat with the "let the evil side out" serum. It flips out and starts wrecking the lab (which only proves that it's a cat, not that it's gone evil); Marlowe panics and beats it to death with a poker. It looks like the good doctor might have a hell of a temper when he's surprised, and that can't be good news when he inevitably tests the serum on himself.

But before he can do that, Marlowe tries the serum on a psychiatric patient in his care, first warning her that he cannot predict its effects and that there's a certain amount of risk. She responds to the treatment by trying to seduce him in a manner that would have been absurdly straightforward in the present day, let alone the Victorian era. When the formula wears off, the patient is ashamed and shaken by the contents of her own mind (though the movie also presents this as a potential breakthrough in her treatment; as addiction counselors can tell you, the first step to treating a problem is admitting its existence).

Back at the club, Marlowe ties the (then-) new theories of Sigmund Freud with the action of his newly developed drug on the human subconscious. He tells the other men there that his drug looks to be a physical method to let the id out to act in total freedom, and decides that testing it on his other patients is one way to determine whether or not the drug really does what he thinks it does. Experiments with different patients show that each one has a different reaction to the drug, and the next step in Marlowe's quest for knowledge is to try the drug on himself, with the plan being that he'll see if the effects are same for him each time he shoots up. This leads to the scariest thing in the movie:  Christopher Lee grinning from ear to ear as if he's having the time of his life. He looks absolutely terrifying through nothing more than the expression on his face. The drug seems to turn him into a sadistic child, and it cannot be a coincidence that the first thing he tries to damage while playing around in his lab is his own portrait. A clock chimes for the hour and Marlowe administers the antidote to himself, having spent a precisely measured ten minutes with his repressed dark side running free.

Of course it's impossible to let one's dark side out on a carefully regulated schedule; the bad side of one's personality doesn't play by the rules by definition. Marlowe finds to his shame and sorrow that his id likes it when it gets a chance to play and has no intentions of submitting meekly to his plans to stop taking the drug and consequently stop acting like an utter bastard to everyone he comes across.

The changes don't stop with the mental; as "Edward Blake" gets free reign in the world, Marlowe's features become uglier, more feral and primitive-looking (possibly as a reflection of how the doctor feels about his repressed side), stamping his face with his sins like a Dick Tracy villain. Partly this is for shock value, and partly the movie wouldn't make any sense if Doctor Marlowe's friends didn't recognize him when he was under the influence of the id-releasing serum. Watching Christopher Lee's features crease with resentment and loathing is one of the high points of his performance--his Blake is the absolute antithesis of the cultured, mannered and articulate Marlowe.

The doctor's friends cannot help but notice the change in his behavior and try to figure out what's going on; they come to the conclusion that Blake is a criminal blackmailing Marlowe and that he has to be stopped. This is easier said than done, of course. But Marlowe's friends are concerned for his welfare, especially after the doctor changes his will to give Blake all his worldly goods in the event of his disappearance for more than three months.

Blake's crimes escalate from theft and vandalism to murder; while he's in control he does what he can to terrify the lower-class people around him, which culminates in his stalking a woman who mocked him in a bar and beating her to death with his distinctive walking-stick. Marlowe swears off the drug now that even he can tell he's gone too far, but at this point, his id doesn't necessarily need a dose of the elixir in order to break out of its restraints...


The print that Image Entertainment used for the DVD of I, Monster doesn't do the movie any favors--it's pretty blurry and washed-out, and Christopher Lee's skin looks way too pale to be real in many of the shots. But even the cruddy quality of the transfer can't hide the talent that Lee brought to both roles, with a cultured doctor and a sullen boor sharing the same body (I'm quite impressed with the transformation scene played out with a shadow on the wall--you see one man turn into the other just through changes in posture and bearing).

It's the same kind of period piece horror movie that had been made since the Fifties (second-tier studio Amicus produced the film, the Pepsi to Hammer Films' Coca-Cola). The next year Blacula would bring old horror archetypes into the contemporary world rather than setting its narrative in the 19th century or earlier as dozens of Hammer and AIP films did; at the mid point of the decade Tobe Hooper and Leatherface would redefine the horror film for the next four decades and counting. Still, this one's worth a watch--if for no other reason than to see the six-foot-five Christopher Lee using the body language of a delighted but nasty child as he plays the capering id of a repressed doctor and for one more look at those foggy London streets that had seen so many monsters and ghouls in the world of cinema from the 1930s and onward.

Now, of course, it's the period pieces that are a novelty (Hammer's own The Woman in Black, from 2012, is about the only one I can think of from the last ten or fifteen years to be released theatrically). There also hasn't been a horror star in the last twenty or thirty years on the level of a Vincent Price, Peter Cushing or Christopher Lee (Robert Englund probably the closest we came, and he hasn't worked much in the last two decades). I think the pop culture world is poorer for that absence, but I'm at a loss as to how anyone would make money off of horror movies for grownups any more.
Posted by Tim Lehnerer at 7:11 AM