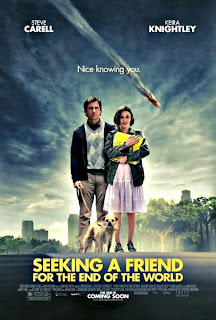 Written and directed by Lorene Scafaria

I can see why this one didn't do well with audiences; in most end-of-the-world movies the world doesn't end. Even 2012 had the yacht full of billionaires make it through the apocalypse. In this one? Stick a fork in the third rock from the sun; it's fucking over.

But before it ends, there's still a story to tell, and people have to make choices about what they're going to do with the rest of their lives. Just like you and me and everyone we'll ever know. As well as everyone we'll never even meet.

The first thing the audience hears in the movie is a radio news report that the space shuttle Deliverance has been destroyed by a fire and explosion; all the crew members are dead and the last-ditch mission to deflect a seventy-mile-wide asteroid has failed. Humanity is doomed. In three weeks the rock will pulverize the earth and the best case scenario is that it'll land in the ocean and steam-clean the planet in a matter of seconds. Then the DJ promises to keep playing "all your classic rock favorites" and cues up "Wouldn't It Be Nice" by the Beach Boys. The movie pretty much earns my allegiance until the end credits at this point.

Dodge is a boring man with a beige sedan, and the first human reaction to the news that the world is ending is his wife wordlessly getting out of their car and running into the night. He's too numb and stunned to do anything about it. The next day he goes to work (selling insurance, which has become utterly futile) and we see that his numb detachment is the only thing holding him together. Other coworkers--about a tenth of the company has decided to come in to work three weeks before the end, if the empty chairs in the meeting room are a trustworthy metric--are either sobbing openly or trying not to think about anything but filling the vacancies in the org chart.

The next sequence is a suburban dinner party where a pair of Dodge's married friends mix full-strength cocktails for their preadolescent kids and one celebrant brings heroin, since they'd always wanted to try it. The dialogue is sharply observed here, with every character showing how badly they're dealing with the end of the world. An argument over setting Dodge up with a single friend of the couple leads to the wonderful line "He's not going to die alone. He's going to die with everybody else."; the cracks are showing in everybody's psyche early and often. Patton Oswalt gets a gutter-poetry soliloquy here about how many people he's able to have sex with now that nobody cares how you look or whether or not you have any STDs. The atmosphere of willfully blind desperation doesn't break through Dodge's shell and he turns down more than one offer of consequence-free sex as well as the possibility of connecting with another human being.

Shortly after the dinner party, Dodge has a meet-cute with his apartment neighbor Penny as she breaks down crying about missing the last flight to England to see her family. She winds up watching TV in Dodge's apartment ("I won't steal anything if you don't rape me." "Deal.") while her just-minted ex-boyfriend clears his stuff out of her place and leaves. This scene provides the totally-not-foreshadowing news that Penny suffers from hypersomnia; she sleeps through a literal day and night after conking out on the sofa. Dodge escorts her back to her own apartment (having been press-ganged into bodyguard duty, if he's needed). He finds out Penny's been hoarding his misdelivered mail and continually forgetting to give it to him for three years. It turns out that the woman that Dodge considers the great lost love of his life was trying to get back in touch with him, and with less than three weeks to go before the apocalypse Dodge thinks it might not be too late to try and get back with her. There's only 12 days or so to make up for lost time as a best-case scenario but he's willing to give it a try.

The same scene where Penny gives his mail back also lets Dodge know that his wife was having an affair and was much happier with her boyfriend than she was with him. In a fit of enraged pique he throws out all of her clothing and swaps out his bottle of codeine cough syrup for a bottle of window cleaning, trying to end it all and leave before the big rush. It doesn't take and he wakes up in a park to find a dog's leash tied to his leg and a note reading "Sorry" on his chest. He decides the dog's name is Sorry, and takes him home, sorting through his mail as the news covers ongoing riots and anarchy in the streets. This scene also demonstrates the importance of remembering where you parked, because approaching mayhem won't slow down just because you don't recall where your car is.

The movie changes gears at this point, becoming a road-trip movie and concentrating more on Penny and Dodge as they get to know each other. Dodge needs a ride to see his lost love; he trades Penny a favor for it, saying he knows a man who owns a plane and who can get her to England to see her family. And from there the movie opens up, with the various people Dodge and Penny meet on the way to the long-lost Olivia's house providing a counterpoint to their relationship. There are moments of surprising beauty (a mass wedding on a beach where the pair of protagonists look on) and dark comedy (a meal at the Applebee's-type chain restaurant where the employees have been drunk and high for weeks and hanging out with each other in an ongoing orgy / food service situation). The car runs out of gas and nobody's been delivering any for the last week or so, which means Penny asks a former boyfriend for the loan of an electric car from his bunker (Dodge:  "You guys have a lot of guns, and a lot of potato chips.") And as they both get closer and closer to their respective goals, the pair grows closer to each other. They finally realize the sick joke played on both of them:  Without the world ending, they never would have met each other and now there's not time enough for love.

I think there had to be a dozen battles fought over the movie as it was being financed and made; the stock characters of Hispanic Maid Speaking Only Spanglish and Layabout Mooching Broke Boyfriend grind up uncomfortably against a film that uses one of Dodge's coworkers jumping off the building as a sight gag to destroy his car. Penny and Dodge themselves are a Manic Pixie Dream Girl and the Sad Sack Who Opens Up His Heart, but the world of the film is more messy and human than you normally get in a millennial romantic comedy (though the third act goes into the standard American film daddy issues that pollute damn near everything up to and including Star Wars). Neither Dodge nor Penny gets what they wanted out of their journey but they both wind up with what--and who--they needed. If you're going to be facing the end of everything, there's worse things to have happen to you. There are two movies struggling with each other in this one--the witty, human, messy, conflicted and funny one that Lorene Scafaria set out to make and the one that the demands of the genre and studio funding required. Scafaria won many more fights than she lost and I'm willing to be the movie is quite close to the ideal one she set out to make. The closest comparison I could come to is that it's the Indiewood version of the low-key Canadian masterpiece Last Night. If you like your Armageddon stories to be about people rather than explosions you should check this one out. See it with someone you care about and try not to have an argument afterward. In the final analysis, life's too short.

This review is part of the TEOTWAWKI roundtable; for the end of 2013 we're reviewing movies about the end of the world and for the beginning of 2014 we'll be taking a look at what happens after that. The links below are for reviews from other participants. Check 'em out; they're good people and they write well about movies.

Terrible Claw Reviews is taking a look at Genocide.