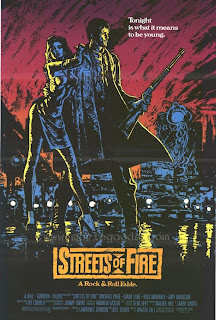 I want the hair that the villain has in this movie SO BAD. He has an amazing duck's ass rockabilly pompadour that looks for all the world like a cobra's hood. Perhaps by B Fest my hair will be long enough to style like that, and maybe I'll learn what kind of wax or grease I need in my hair so it'll stand up and stay looking like that. You never know.

This whole movie's like that for me--it's a heightened cinematic reality that would probably look ridiculous if any mere mortal tried to replicate in in the real world. But as the opening credits let us know, this one takes place in "Another time, another place". A place where tough guys settle disputes hand to hand (or railroad-spike sledgehammer to railroad-spike sledgehammer). A place where the streets are wet at night to reflect all the neon lights, a place where bikers run a district of the city as their own personal fiefdom, a place where Fire, Inc. and the Blasters both get to perform multiple songs diegetically and a place where Bill Patxon's crazy-ass pompadour serves as a chilling reminder of what I'll probably wind up looking like if I do go for the cobra hood greaser look.

So...there's this movie I'm supposed to be telling you about, right? It's a retro-rock flick described by its writer/director Walter Hill as "the Leader of the Pack steals the Queen of the Hop and Soldier Boy comes home to do something about it". And that's more or less what you get.

At a benefit concert for her old home town, Ellen Aim (lead singer of the Attackers) is kidnapped by the leader of a biker gang called the Bombers. Bill Paxton's character is punched out by Lee Ving, and the audience is now required to do a shot. The bikers withdraw with their prize and a diner owner tells her brother Tom to come back to the Richmond (wherever that is in Another Place) to get her back from Raven Shaddock, the Leader of his particular Pack at the request of Billy Fish, her promoter / manager / current man.

Parenthetically, I want to praise the hell out of the opening number, "Nowhere Fast". It's a Jim Steinman rock ballad about burning out rather than fading away instead of one of those "I'm invincible and all the chicks dig me" songs. It's about feeling trapped and the exultant rush of joy you can get out of accepting your doom. Heavy stuff for opening the film, but Steinman has always been the world's best purveyor of heavy metal and light opera at the same time. And during this song, Walter Hill does some masterful editing to establish the geography of the scene and the menace of the Bombers. He cuts to the Bombers twice in the middle of the song, each time with the sound of them gunning their engines as the percussion to the song. Each time he cuts to the bikers the screen is full of motorcycles traveling from the top of the screen to the bottom, making them look like they're approaching the viewer. And the second time he cuts to the bikers they're in a closer shot; I couldn't tell you at all where the Battery is in relation to the Richmond in this movie, but you don't need to know that to see that they're getting closer to the main action, wherever they are. And the third time that Hill cuts to them, they're in the concert hall, which is the start of the bad news for every main and secondary protagonist in the film.

Upon his return to the crappy neighborhood (the Richmond, I guess, from what other characters refer to it later in the film), Tom Cody pretty much immediately establishes his foot-to-ass credentials by slapping the leader of a third-tier gang calling themselves the Road Masters and beating all of them up singlehandedly. The Road Masters flee on foot after they learn not to pick a fight with an orange Elite Boss on his own turf and he helps himself to their sweet ride.

Drowning his sorrows at Clyde's bar, Cody meets a tough as nails woman named McCoy who knocks Paxton out with one punch (audience, drink another shot) and who says that she, like Cody, just got out of the army. She sleeps over at Reva's apartment (Reva is paying rent so she gets the master bedroom; Tom is her brother so he sleeps in the guest room and McCoy gets stuck couch surfing). Tom decides to take the job to get Ellen back from captivity and rounds up a bag of guns, a driver and a navigator for his particular adventuring party. The plan is simple:  The Bombers hang out at a huge bar called Torchy's in a neighborhood called the Battery; Tom and his crew will sneak in, spring Ellen and get the hell out before the bikers can get them (the Road Masters' car can outpace their bikes, especially after Cody shoots out a few tires and gas tanks). Tom is the party leader, McCoy is backup gun and driver, and Billy Fish, the poor sonofabitch, is stuck trying to remember the way the streets in the Battery run (when he was a young up and coming rock promoter in the city he became familiar with the turbo-shitty neighborhoods where all the best bands were playing).

The trip out goes more or less as Tom and his crew expects it to, with Raven expressing more than a little admiration and joy that someone has challenged his rule over the Battery. Of course, he won't let a challenge to his rule go unanswered so everyone with a still-running bike is out for Tom's blood (and are probably perfectly willing to settle for his friends' lives if they can't have his); on the way back the rescuers ditch their car for a dingy tour bus owned by the Sorels, a doo-wop group. The bus gets them out of a couple scrapes and into a few more (including a run-in with corrupt cops that goes from bad to worse to explosive), and they ditch the bus for walking back to their original district.

Raven, for his part, sneaks in to tell a police sergeant that he wants to beat Tom Cody to death under the concert hall marquee to display his manliness and that he'll even show up with only one other biker as his backup as a show of good faith. The cop tells Tom that he did the right thing (surprising the forces of law and order; it is implied that an earlier run-in with the police is the reason Cody had to join the army in the first place) and that he should do that again and get the hell out of town. Oddly enough, Cody agrees to this as well and leaves the city, but goes back to satisfy his honor and provide one hell of a third-act fight scene when the chips are down. Which is good, because Raven lied when he said he wouldn't bring his entire gang in to wreck the neighborhood and it's down to an exhausted Tom Cody to stand up for the little people against the sociopathic leather-clad interloper...

Let me get this out of the way:  There is a reason this is a cult movie (it flopped during its original release, and the plans for two more Tom Cody urban adventures died on the vine as assuredly as the film where Buckaroo Banzai takes on the World Crime League). I love it anyway, because I'm just that kind of guy.

One element I haven't mentioned at all is the sheer scope of Another Place; in order to avoid running afoul of child labor laws (some of the actors weren't yet eighteen when the movie was being filmed), Walter Hill had a gigantic urban set built on a backlot with a massive opaque tarp over it to provide an artificial night for the scenes where everyone makes their way to Torchy's and flees after the rescue. And the fashions of the altered reality can all be seen to have springboards from the real world; Billy Fish wears horn-rim glasses, a striped shirt, hounds-tooth jacket and a plaid bow tie (all of which are made of quality materials and expertly tailored to fit him, for what that's worth). Nobody in the real world would ever go for that look, but on Rick Moranis it serves instantly to show that he's the resident twerp and richer than the rest of the cast put together. Tom Cody's got a pair of sturdy pants and a sleeveless work shirt with suspenders, giving him a blue-collar look while showing off his muscles (but not giving him any extra points for glamor). Raven and his gang wear head-to-toe leather (and in one memorable misstep, a shirtless Willem Dafoe rocks the hell out of a pair of rubber overalls that look more than a little like they're made out of garbage bags). Clyde the bartender has a fondness for argyle sweater-vests and the police wear street uniforms reminiscent of the 1930s. Ellen Aim has a New Wave red-and-black outfit during the opening concert that seems to partly vanish when the stage lights go red and McCoy has a masculine outfit down to the ground (extra points to the film for establishing that she's a lesbian without making her a butched-out caricature).

The set design goes right along with the costumes--to me, the world looks like it ran through three sets of the Fifties and then switched to 1981. Rockabilly bands and doo-wop share stages with a band playing Jim Steinman's blend of light opera and heavy rock; the hairstyles seem like a combination of the Eisenhower and Reagan years as well. And the police all drive torpedo-nosed Studebakers. Neon lights up the night in that mid-80s "random squiggly shape" way rather than the clean lines of the Googie architects of the postwar era.

And the dialogue! Oh, the dialogue! Back when I was taking a screenwriting course as part of my education that has led to my current job as a shipping clerk, I learned that you're never supposed to have a character say anything exactly; it's disdainfully referred to as being "too on the nose". And every single line of dialogue in this film was carefully crafted to give people who know that rule hives. That rule gets a serious working-over from the first frame to the last. All the characters speak directly and forthrightly about whatever is going on, with each actor getting in the groove and fitting right in to the altered reality (the notable exception is unfortunately Michael Pare, described memorably by Chad Plambeck as "the human equivalent of a 404 Document Not Found error" whenever he's called on to emote). And, no joke, I think this movie has Rick Moranis' single finest performance in it. If you're a child of the eighties (I'm one myself), you owe it to yourself to look at this one; it's nostalgic for itself, if that makes any sense. And even though it takes place in Another Time and in Another Place, there's more than enough you can recognize as awesome in any world. Even our own, where doo-wop was exiled from the airwaves even before the Beatles showed up.
Posted by Tim Lehnerer at 9:56 PM