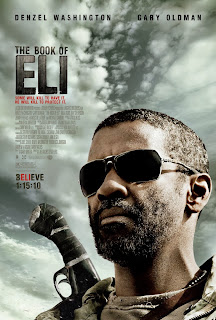 Written by Gary Whitta
Directed by the Hughes Brothers (Albert and Allen Hughes, who also thank their mom in the ending credits)

I'd had this one spoiled for me years before I saw it, and if that hadn't happened I would have evangelized for it like you wouldn't believe. It's a bog-standard Lone Wanderer Guy movie with a set design aesthetic pinched from the Fallout games and Road Warrior movies but it's got a twist at the end that is absolutely jaw-dropping in its dumbth. I'm used to seeing low-budget genre trash go insane in the endings of Rock and Roll Nightmare or Christmas Evil but this has to be the first hundred million dollar movie I've seen that went comparably mental.

Eli is a Lone Wanderer Guy going west, following voices in his head (this exposition gets delivered in bits and pieces throughout the movie) that tell him he will be protected from opposition as he goes to the edge of the ecologically devastated territory that used to be the United States of America. He's been traveling for three decades on this task and is one of the rare few humans who can remember what life was like before "the Flash" and the resulting huge uptick in solar radiation that scorched all the pigments out of the film other than grey, brown, greyish-brown and the occasional brownish-grey. He has a book with him, that he has been reading every day since he started his mission, and he is to carry it to a place where it will be safe on the western edge of the continent.

Unfortunately for him, Eli's path takes him to one of those hanging-on-to-the-desert-by-its-fingernails shanty towns, run by a standard issue Smart Overlord(tm). The overlord is played by Gary Oldman, so we at least have exceptionally talented people playing the protagonist and antagonist, and neither one phones it in (though Oldman looks tired of being the bad guy in this one). Carnegie, the overlord, has been sending raiders out into the desert to look for books. Well, actually, for one particular book, which contains the secret language that will let him command people and get them to do what he wants and expand his tinpot empire past the one town that he currently controls.

And wouldn't you know it, after making mincemeat of his opposition in a bar fight, Eli comes to Carnegie's attention. Before the bar fight we get to see Tom Waits playing a scrapyard engineer in one of those general stores stuffed with all the pre-Flash junk that the set dressers could find and we're treated to some character-revealing scenes with Eli; he wants his miraculously still functional iPod recharged and when the junkman pulls a shotgun on him, he snags it out of his assailant's hands, then hands it back as a sign of good faith and willingness to negotiate. He's got a working lighter to trade, but the merchant wants Chapstick (which is a hot commodity in the sun-scorched desert of California). Eventually they come to terms and Eli gets a drink of water at the bar, irritates the leader of a biker gang that works for Carnegie, wipes them out, etc.

Carnegie wants to hire Eli to scavenge for him; failing that, once he finds out that Eli has a book (or perhaps, more accurately, a Book) with him with a cross on the cover and a lock keeping it shut he wants that Bible so he can increase his temporal power. In the movie's most biting moment, he says that he wants this one particular book because "people will do exactly what I tell them if the words are from the book. It's happened before."

So it's up to Eli to sneak out of town--or rather, to walk out after he tries to sneak out and there's a gunfight that decimates Carnegie's thugs--followed by Solara, who figures she's safer in the wasteland going somewhere else with the Lone Drifter Guy than staying under Carnegie's thumb; they camp out in an empty nuclear cooling tower (which also muffles the light from their campfire, so Carnegie's thugs can't find them easily) and Eli delivers part of his back story and recites a psalm to Solara since she asked nicely. They bond a little bit even though Eli's one of those stoic wasteland heroic figures and band together for the final leg of Eli's cross-country trek.

Partway to the edge of the world, the pair encounters George and Martha, an elderly married couple (and, like Eli, people who remember the pre-apocalyptic world). They offer tea and some music (a hand-cranked gramophone that plays the funniest gag in the movie), and then a plate of horrific-looking meat. Their hands are shaky, which turns out to be a symptom of a humanitarian diet. Eli outdraws George and prepares to leave the couple to their hobbies (gardening, music, killing and eating anyone else that stumbles across their house) when Carnegie and another posse of thugs roll up in a four-vehicle caravan. A booby-trapped package that looks like it could be a book scratches one car and the firefight that follows takes out three more hench from Carnegie's gang as well as George and Martha.

Carnegie, his leg wounded from an earlier firefight, gets the book from Eli after threatening to kill Solara. He gutshoots Eli and leaves him at the shot-to-pieces house but Solara garrotes the driver of the car she's being transported in. During the flip-and-roll accident that follows, Carnegie's head thug learns the dangers of being in a tumbling car with an unsheathed machete and Solara pitches a grenade under another car. Carnegie has to make the choice between chasing her down or going back to his home base with the Bible, and he decides the book is more valuable than punishing a troublemaker. Back to town with him, while Solara zips back to George and Martha's place and picks up a stumbling Eli to drive him as far west as she can.

Carnegie gets back to town, and only has eyes for the book. He gets his pet scrapyard engineer to pick the lock and that twist I mentioned earlier shows up. It's really a Bible, and Eli wasn't lying about that--but it's in Braille. Eli has been a gunslinging Zatoichi the whole goddamned time! And since I knew about this twist going in, I was paying attention to lots of little details the whole movie long. Remarkably, the film doesn't cheat more than necessary to keep this a secret (among other things, Eli only takes anyone out in the gunfight in town after they shoot at him; he can only hit people that he can track via hearing).

The movie goes on for about another fifteen minutes past its natural ending point, which at least gives us a nifty Malcolm McDowell cameo as the man who welcomes Eli to the Alcatraz island museum, repository of lost books and gift shop. But it just...doesn't...end...until it's time for Solara to go back to the town and build up a little pocket of civilization in the power vacuum left over from Carnegie's wound-sepsis induced death and the loss of damn near every single one of his hired thugs.

There's more than a little to recommend about this one, honestly, and not just for that turbo-stupid twist at the end. I was expecting to bag on it from frame one but I couldn't. The swordfight between Eli and a six-pack of Wasteland Raider Dudes(tm) at the beginning is shown in silhouette, with Denzel Washington or his stunt double flickering from enemy to enemy and taking them apart. The guy with the chainsaw goes down last, which is probably about how that would go in reality. The color palate of the movie is washed-out to show the damage being done to everyone by the sun (apparently the ozone layer got more than a few massive holes blown in it during World War III). There's enough technological goodies left over to have a car chase and a biker gang, but once those tires are blown out nobody's making any more of them so Carnegie has to husband his human and material resources carefully. And in the pursuit of what he thought he wanted, he spends them all and winds up with nothing. That's the standard "evil destroys itself" ending and it's fitting, since Eli wasn't wandering into town to clean it up. He just wanted to take his copy of the Bible to the end of the country and hand it over to someone who could keep it safe.

But on the negative side of the balance sheet, there's also more than a little written down. You've seen this movie before. I've seen this movie before. Hell, my parents have seen this stuff before and yours probably did too. Fallout 3 was released two years before this movie (and the first games in that series a decade earlier), and there's other precedents for the look and setting that go back a literal generation. We've all seen movies with stoic wanderers on a mission and villains that want to manipulate the desperate and gullible before to boot. The scene where a man just wants to drink his drink in peace and leave the bar, but a jerk wants a fight so he won't let the hero go. The ending sinks to the level of a postapocalyptic Goofus and Gallant strip ("Eli gets medical attention and a haircut for being nice. Carnegie dies of septic blood poisoning and people steal all his stuff for being mean.") Worst of all, the idea that hundreds of millions of copies of the most common book in the Western hemisphere would vanish completely is so stupid that it makes Pauly Shore look like a Nobel Prize contender. Among other things, did the Flash eat every hotel room in America? No? I didn't think so either. I absolutely can't get over the idea that people would forgo finding food and water after Armageddon for a book-torching festival. And that's such a gaping hole in logic and plausibility that I find myself accepting a blind gunfighter more easily.

Welcome to 2014. The celluloid zeroes that I hang out with digitally (and, in two weeks, in real life at B Fest) are reviewing movies that take place after the end of the world to ring in the new year. I'd consider it a personal favor if you went ahead and read their work after you're done enjoying this review.