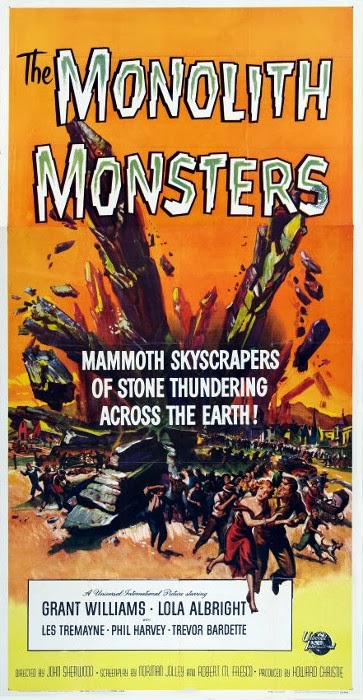 You know you're in for a treat when you hear that Universal Studios Monster Music. Back in the fifties every brass musician in California was pressed into service to announce that the Creature from the Black Lagoon or the Tarantula or the Deadly Mantis was out causing trouble. If you're like me, and I know I am, you get a big silly grin when you hear that stinger. You know you're going to get a group of all-American heroes working together to beat a menace that's completely out of their experience as only a postwar B movie can provide.

And what a menace! This is a movie I refer to as Earth Vs. Physics when I'm summarizing it for friends; the monsters have no agency or will. It's just an accident of chemistry that makes them a threat to all life on Earth. Compared to the frozen-and-thawed out Deadly Mantis or the legion of gigantic beasts that threatened Japan, it's a completely unique monster. How often do you get to see a movie about a kaiju pebble, or one where the threat is a completely inanimate object?

The movie starts with another Fifties signifier just as cool as the brass section going crazy--a voiceover about science stuff from Paul Frees. He's giving the audience the lowdown on meteors pelting the Earth while stock footage of craters and starfields are shown on screen. Then we get a meteor smacking into the California desert and the opening titles run over a shot of the smoking pit caused by the celestial impact. When that's done, we get our Expository Casualty setup; a geologist with an overheated car radiator stops to take care of his car trouble, picks up a chunk of totally boss-looking black volcanic glass and goes back to his Department of the Interior district office in the small desert town of San Angelo, where the story will take place. Newspaper publisher Martin Cochrane comes by to shoot the breeze with the doomed scientist and take part in the ritualistic offering of exposition to the audience (the desert near San Angelo is a salt flat; the black rocks are completely unfamiliar to the scientist; the desert town is boring and the newspaper never has anything worth writing about). That night, a gust of wind drops a beaker full of water onto the mineral sample and the doomed geologist hears the reaction before he sees it--the rock is bubbling and visibly growing as he watches, sort of like the wimpy snake fireworks that turn from a pellet to a long spindly column of ash. Cochrane is probably never going to complain about anything else for the rest of his life after seeing what happens when he wishes for something newsworthy in his backyard...

The next morning, the protagonist Dave Miller returns from a trip to Bakersfield to find that the office lab is a shambles, with several hundred pounds of obsidian-looking rocks all over the floor. And, much worse than that, the other geologist has been turned to stone! The super-cool thud his body makes when it hits the floor is almost completely drowned out by the Monster Music, unfortunately.

While Dave is finding out that Ben (the other geologist) has been fatally petrified, his girlfriend Cathy Barrett is out in the desert with a class full of schoolkids out on the desert-wasteland equivalent of a field trip. One of the kids picks up a chunk of Space Meteor Rock and takes it back home; her mother tells her to clean up the filthy mineral sample before coming inside for dinner. And since we've already seen that Space Rock + Water = Death, things aren't looking so hot for Ginny Simpson or her parents, but we'll come back to them after it's too late to warn or help 'em.

Meanwhile, Dave and Cochrane are at a doctor's office, having taken Ben's petrified body there to try and determine what the hell happened to him. The doctor can only tell them that he's completely dumbfounded and outclassed and that he's shipping the cadaver to a medical research institute in the hopes that they can figure out the answer. Ben's body is a solid mass of fused skin, flesh, bone and organs seemingly without cause (there were no symptoms prior to his death that anyone noticed). The newspaperman frets over not wanting to cause a panic now that there's actually something to write about--not that people are likely to believe it. Cathy notices the Space Rock and notes that one of her students took a chunk of it home; the authority figures drive over to the Simpson place and find thousands of pounds of stone fragments, which have completely smashed the house from the inside. Ginny Simpson is still alive, but her parents are statues and one of her arms is turning to stone.

Well, now the police chief, teacher, doctor, scientist and journalist are starting to put the pieces together; they don't know exactly what the mechanism is but it's pretty conclusive to them that the mystery rocks are connected to the petrification deaths. Dave starts out without even the most basic information (he even has to confirm that the rocks at the Simpson house and the lab are the same material). Since there's no facilities in San Angelo remotely up to the challenge of dealing with progressive petrifaction, Ginny is brought to Los Angeles and stuck in an iron lung as a way of trying to arrest the progress of her condition. The doctors say that she's doomed unless they can figure out a way to stop or reverse her affliction, but nobody has seen anything remotely like it before and have to start before square one in order to save the day.

Dave presses his old college geology professor into service; the man immediately proves his worth by pointing out that the mineral is unrecorded in all of the standard texts because it's never been around to be recorded; it's a meteor fragment that could have been making its way through the universe for thousands of centuries before getting sucked into Earth's gravity well and making life hazardous to everyone in San Angelo. Further work back at the lab reveals the method by which the rocks kill people; when the rocks are multiplying in size, touching them will leach the silicon out of the poor victim's body, leaving them inflexible and doomed. I'm guessing that Ginny only got a light touch, since she's got several hours before dying according to the specialists and the other casualties are solid to the core (with Ben standing literally dead on his feet during the first act).

The two geologists find the Patient Zero impact crater and see the largest piece of Space Rock on the ground, declaring to each other (and the audience) that they need to find out what triggers the rocks' growth cycle and lethality. Somewhat tardily, both Professor Flanders and Dave mention that they've been handling the rocks without dying (I would have at least put on some gloves or something, desert heat or no). They've tried heat and electricity as well as some chemical catalysts but the rocks aren't doing anything. Then serendipity strikes when Dave pours out a pot of overbrewed coffee and the liquid makes a tiny chip of Space Mineral grow two feet tall in the sink, then fall over thanks to its weight and poor balance. They quickly confirm that water makes the rocks grow. Dave's Shatnerian speech about how it's a simple thing like water that makes the unprecedented miracle of science is cut short during the first sentence when he looks out the window and sees the rainstorm coming down.

A quick trip to the meteor crater in the rain reveals columns of massive stone rising up and shattering under their own weight; San Angelo is directly in the path of the advancing megaliths thanks to the slope of the ground between the town and the crater, but once the stone fragments aren't confined by the convenient canyon walls every living thing in the state could be at risk of being crushed by a falling rock pillar or turned to a statue. The rain's going to stop by morning, but the weatherman says there should be another downpour in a couple of days. The small-town protagonists are going to have to figure out how to cure petrifaction as well as developing a way to retard or destroy the rocks' growth cycle in under 48 hours or civilization could be destroyed by a threat that doesn't even know its own lethal potential...

This was the first movie I can remember watching on "Son of Svengoolie", the Chicago horror movie host that has been showing old monster flicks on TV and cracking Borscht Belt jokes since I was five years old. I turned 39 last month and I still think he's got the best job in the world. It's still one of the coolest monsters I've ever seen (with plenty of 50s-style matte paintings and super-awesome miniatures of the German Expressionist towers of gleaming black stone rising and shattering in majestic slow-mo). Every penny of the budget winds up on screen, and all the actors acquit themselves credibly. It might have been a B flick even when it was being made, but everyone involved from the screenwriters to the actors does the best job they can and sells the heck out of the material. It's also short enough that it doesn't overstay its welcome and the escalating crises keep things moving at a brisk clip--one problem gets solved but other ones remain, with the time limit of the second rainstorm keeping the pressure on all the characters even after they figure out how to neutralize the space rocks' lethal capabilities.

And it's great to watch everyone pull together in the crisis--the phone lines are out, so the people in San Angelo are stuck on their own to try and figure out the problem as well as the solution. It's archetypal of a movie made a dozen years after the second world war that characters representing the media, law enforcement, science and medicine would all immediately work together at risk of their own lives (Dave and Professor Flanders spend a lot of time working with materials that they know could kill them at any moment but don't balk for even a second). It's pretty telling that in 2014 I find the idea of communities pulling together to help everyone in the face of crisis less believable than instant dehydrated killer space monoliths.

This is part of the Big Footprints roundtable; one of my fellow celluloid zeroes wanted to review giant monster movies in a huddle this weekend and I'm happy to join in.

Micro-Brewed Reviews listens to The Sound of Horror