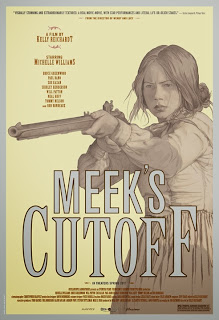 The entire cast of the movie:

If you're of the same vintage I am (38 years young as of this writing), you remember the old Apple ][ game "Oregon Trail". I remember playing it in grade school, and signing up for time at the indestructible old computer at the library thirty years ago (!) to play it during the summer. That computer is probably going to last longer than I am.

It amuses me to reflect that this film works as an adaptation of that game--it's about dwindling supplies, an endless walk across desolate terrain, the need to balance effort against the well-being of the pioneers and just like the game there aren't any save points or do-overs for the unlucky bastards making the trip.

We start with the film's simultaneous sole opening credit and mission statement, with "Meek's Cutoff" and "Oregon 1845" embroidered in dark blue yarn on a canvas blanket. From the literal first frame of the narrative there's a lack of usual filmic technique--similar, in a way, to the credits of Fahrenheit 451, which were read to the audience rather than superimposed on the film.

A group of pioneers (three married couples, one with a young boy) cross a burbling river, each one working to keep their belongings out of the water. And again, from this very first shot, the attentive viewer notices that this is a rare film, in that the Western landscapes are filmed in a barely-widescreen aspect ratio of 1.77:1 (the squarish television screens of yore are 1.33:1). The effect is to show great distance but no scope, forcing the viewer to see everything as far away but without the usual Cinerama widescreen glory that Westerns were known for. Reichert shows the viewer that this movie is not going to be anything like the usual narrative set in the mid 1800s in the Western half of America. For that matter, the narrow and tall frame is reminiscent of the view from inside a bonnet, or from inside one of the Conestoga wagons the settlers are using to carry their belongings.

All this information is imparted almost subliminally to the audience before a single line of dialogue is spoken (and when we do hear a human voice, it's probably significant that it's the boy reciting a passage from the Bible about humanity being cast out of paradise to suffer and die).

The pioneers are traveling west, with their guide (a totally unrecognizable Bruce Greenwood) leading them across Utah via a shortcut that he told them about, and that may or may not exist. Several shots show single figures staggering across barren, inhospitable land under the direction of a blustering cowboy, and as the water supplies start to run out the settlers start to have conversations (among the men, at first; eventually, Michelle Williams' character becomes the voice of agency and action for the group) about whether their leader is incompetent to the point of homicidal and suicidal results or if he's actively evil, trying to get the entire band killed. Which, in a movie released in the cultural hangover of the Bush the Lesser presidency, makes a lot of sociopolitical sense.

Of course, it's too late for any of the settlers to turn back and they don't know where they are or how to get back where they came from, so the question is rather moot by the time any of the travelers even realize that they should be raising it.

The settlers decide to keep following Meek for lack of any better options, and nothing improves--water runs so low that one family stops feeding their canary and the vast spaces seem even emptier without its occasional chirping. In one sequence, the Tetherows throw an antique grandfather clock out of their wagon; it's too heavy and useless to bring with them any farther and it sits shattered in the scrubland like an image from a Magritte painting.

Days and nights progress, with the labors of the trip continuing by firelight after night falls. Meek disappears for a time scouting out the trail and reappearing after one of the men declares he has to have abandoned them to die. In one of the sicker jokes the narrative plays on the settlers, they reach the shores of a massive lake and find out that it's full of salt water (and therefore useless to the thirsty people and animals).

After a while the group comes across an Indian, making themselves eventually understood that they will trade him a blanket for a water source. At gunpoint. Using language that he doesn't understand while they can't comprehend anything he's saying, either. It's a sobering thought for the viewer to realize that this is actually a step up from listening to Stephen Meek any more, the man who was hired as an expert to oversee their journey. The filmmakers decline to use subtitles to translate the Indian's dialogue, so the viewer doesn't know any more than the characters do in any scene where he speaks.

Things continue to deteriorate by accident and through the sheer biological necessity of needing water, up until the very last frame of the film. There's varying opinions on what exactly the last sequence of shots mean, and I'm not sure the way I see it is the way that Reichert wants me to see it. But it's a series of images that will haunt you, and make you think for a while about where exactly the point of no return might have been, and whether or not the settlers realized just how much trouble they were going to be in from the very first step they took on their journey.

This movie blew me away when I saw it in the theater (Ann Arbor is very good to me). It was a slowly contemplative look at trusting a fool to lead you, and it was full of scenes that showed the pace of life in the 1850s. One of my favorite sequences is where Emily Tetherow has to fire a rifle twice as a signal to the men, who are out of the camp looking for water. In one unbroken shot Tetherow fires the loaded gun and then goes through the dozen steps that it takes to reload a flintlock rifle in order to fire it again. Nothing in the world of this film is easy or simple, and the narrative pace could be considered leisurely or boring if the audience didn't realize that every passing minute was bringing the entire party closer to death.
Posted by Tim Lehnerer at 8:29 PM