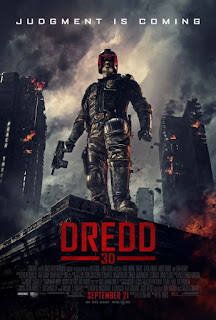 (Hey, Tim, why are you reviewing a movie from last year instead of one from the actual Cold War era?
Because the character was created in 1977 as a reaction to violent American police movies like the Dirty Harry films and the postwar-to-1970s trend for building massive, ultramodern apartment blocks in postwar England, which became crumbling cement slums over the decades just in time for the Sex Pistols and the Clash to create a trash-chic aesthetic in clothing and attitude. Also, if you don't like it, start your own damn blog, hypothetical person. Blogger is free.)

This should have been a massive, franchise-launching hit in the mold of Iron Man. Everyone brought their A game to the film and the fictional, post-apocalyptic world is real enough to smell the sweat, blood, and cordite. I don't know what kept people away from it in America other than the lack of character recognition (or perhaps thinking it was a decade-and-a-half-later sequel to the previous Judge Dredd adaptation, in which case people who stayed away are to be commended for their proper thinking and chastised for not using Google for twenty seconds to find out this is a different film using the same character as the 1995 film).

Stop me if you've heard this one:  There was a final war between the two great political and economic powers. A war that devastated the planet and killed the ecosystem. A war that left most of the land surface of Earth a radioactive desert. In the wake of the apocalypse, the survivors congregated in a massive city covering the United States from Boston to Miama and as far inland as Ohio, giving it the simple name Mega-City One. 850 million people call the city their home, packed into hundreds-of-stories-tall city blocks that hold tens of thousands of people in crowded, stinking urban conditions that recall the worst slums in the First or Third Worlds, the dystopian science fiction of John Brunner (particularly The Sheep Look Up and Stand on Zanzibar) or the now-destroyed Walled City of Kowloon (look it up; io9.com had some great articles on it).

And since we're in a science-fiction flavored action movie, there's got to be a futuristic element or two to the society to go along with the big big buildings. In Dredd, we get two. One:  Crime is so rampant in Mega-City One that a militarized force of Judges have been granted the authority to act as judge, jury and executioner on the spot if they see a sufficiently punishable crime (they are also each granted a totally sweet science-fiction sidearm called the Lawgiver that can shoot different plot-required types of ammunition--from taser rounds to white phosphorus artillery--and a cool motorcycle). Two:  There's enough chemical and radioactive pollution that "mutants" exist--most of them wind up with horrific deformities along the lines of Thalidomide victims but some gain the obligatory radiation-awakened psychic abilities. (Dirty Harry, John Brunner and the X-Men! Such wonderful influences thrown into the blender and frappe'd!)

The hardest, toughest, smartest and most unfeeling Judge in the entire city is Dredd--he's someone that twenty-year veterans of the hellish meat-grinder of police work in the busted future are afraid of. We're introduced to him with a chase that starts out as bike-following-van, proceeds to a foot chase into a tower block, and then a demonstration of what happens when a white phosphorus bullet hits someone in his mouth. Expository badassness established ("Do you require backup?" "No."), Dredd is given a new assignment:  He is to take Cadet Anderson, a Justice Academy washout, on a one-day evaluation to see if she really should be kicked out of the police system. Anderson, you see, is an potentially powerful psychic and the Judges could certainly use a mind-reader to expedite confessions and determine guilt or innocence. Dredd follows orders like a good Judge and lets Anderson pick the call they're going to respond to for her training day, explaining that even with every available Judge working at the same time only six percent of all calls for help can be answered. Anderson decides to investigate a triple homicide in the Peachtrees tower block, which leads to the discovery that the victims were using Slo-Mo.  What's Slo-Mo? It's a brand new drug that causes time perception to slow down like that Justin Bieber clip played at 0.0000125 speed. Just as with that Bieber clip, even the most horrific or disgusting sensations are infused with a startling beauty under the influence of Slo-Mo. I really, really wish I'd been fast enough to see this sucker in 3-D in the theater because of the horrific flesh-rending damage that gets shown off when people take Lawgiver rounds at super-slow speeds. Yeah, I realize that sounds a little sick. But the filmmakers went to a lot of effort to show flesh-demolishing special effects and they would have to look amazing on the big big screen and in an extra dimension. Not to mention that the filmmakers figured out a way to put a diegetic reason for Matrix-style slow motion combat in the film. Yes, we see some of the same things action movies have been using for a decade, but this time there's a sparkly sheen to all of the mayhem; apparently Slo-Mo has a partly hallucinogenic effect.

After the Judges arrive at the tower block, a little investigation and friendly talk with a doc-in-a-box medic at Peachtrees leads to the quick capture and / or execution of a dozen thugs. One of the living ones turns out to be the guy who killed the three people in the Peachtrees atrium and one of the tower block's crimelord's chief lieutenants (played by Wood Harris; insert your own Avon Barksdale joke here and whenever else you feel like it. I did! It's fun!) He doesn't confess so Dredd and Anderson are required to haul him out of the block and drop him off at an interrogation office. If that happens, Ma-Ma (the crime lord who controls all 200 floors of the block tower) will be executed. To prevent that, she engages the anti-nuke blast shields over the entire megastructure, locking all its inhabitants inside. She says they get sunlight and fresh air again when the Judges are dead and sends out her thugs as the first wave, assuming that if Dredd chews through them she has many more soldiers (willing or unwilling) to use, and that he's only got so many bullets in his personal equipment load. The rest of the film is Dredd and Anderson fighting up 200 flights of slums to execute a sadistic crime lord. For a psychic, Anderson sure looks like she had a shitty hunch about which call needed a response...

Maybe it was the Walter Hill movie I just watched, but this time around I really enjoyed all the ways that Dredd revealed some small fragments of personality underneath the uniform and helmet (which STAYS ON THE WHOLE TIME, because the proper Judge Dredd does not take his helmet off). Karl Urban's performance is a little underplayed rather than pitched to the cheap seats. But even when he's fighting for his life against a superior force he tends to try and out-think his opponents rather than out-shoot them. His repartee with Anderson shows a few tiny hints of humor and humanity buried under the all-business exterior (Anderson says she can't wear a helmet because it interferes with her psychic abilities; Dredd asks whether or not getting shot in the head would do that). And as the second and third acts continue, Dredd notices that despite the thirty-one flavors of hell that Ma-Ma's gang and the rest of Peachtrees is throwing at them, neither he nor Anderson flags for a single minute in their determination. Urban's performance walks an incredibly narrow line, since Dredd is not a character capable of any meaningful change. Anderson, instead, is the one who has to show growth and change over the course of the story. Thirlby and Urban play off each other far in excess of what a big loud action movie requires and this brings a little much-needed soul and humanity to the film in between scenes of bodies getting destroyed by high-velocity bullets. And even during the combat scenes, Dredd shows a few moments of compassion and humanity (using stun rounds on the children that threaten him with plain old bullet-throwing guns, for example). He isn't quite the unfeeling man of stone that he appears to be and by underplaying those scenes rather than underlining them, Urban shows off a subtle talent for revealing the soul of a character that never says anything that isn't straightforward and never reveals more of his body than his chin.

It's a damned shame that more people didn't see this movie and that we are unlikely to get a sequel. The gritty, sun-baked Mega-City One is reminiscent of District Nine more than, say, The Road Warrior or any of its ripoffs. It's in the mold of a movie like Darkman, in that it's a movie made up of lots of things the creators like, doesn't mess around, and just wants to entertain. You could do a hell of a lot worse than giving this one a spin, and who knows? You might just join me in hoping for a sequel that probably won't be showing up any time soon.
Posted by Tim Lehnerer at 11:32 PM