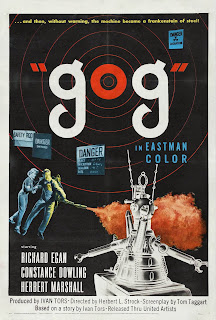 This one went down hard. It took a premise that was guaranteed to delight me (killer robots in a secret science research lab at the dawn of the Cold War!) and sacrificed it in the service of a screenplay that was structured terribly and a director that honestly did not seem to know what he was doing on this one. It was filmed in 3-D and deconverted to a flat print after the studio realized how unimpressive the film was going to look when virtually none of the shots for the entire movie were filmed with an eye towards things popping off the screen.

The film starts with two scientists experimenting with a monkey. They shoot it up with what appears to be a syringe full of Windex and then seal it in an airtight room that is chilled to 85 degrees below zero. The monkey, unsurprisingly, freezes solid. But when the room is heated back to a survivable level and shocks are applied to the primate's heart and brain, it revives completely. Yeah, science! While one of the two experimenters is prepping the freezing room for another run, the door closes and locks itself and the freezer controls work themselves as well; the end result is that the first scientist freezes to death almost instantly and the second one gets the same treatment when she finds the shattered fragments of the first one in the deep freeze room and the door closes on her as well.

And that's the only action sequence for the next hour-plus. Hope you dug it.

A helicopter arrives at the base, carrying a grey-suited Brylcreem abuser sent by the Office of Scientific Investigation (a fictitious agency first mentioned in The Magnetic Monster, and I like to believe that Dr. Gordon in Blacula works for it after it was renamed in the 70s). The chopper pilot mentions that a computer overrides the controls of the helicopter to bring it in without letting any of the pilots know exactly where the science base is; I'm not certain that would work, but I'll let it go for the time being. Dr. Sheppard goes to the science base and his ID and fingerprints are checked in real time by three guards. Then it's a short elevator ride down where it is revealed that the MPs don't have the clearance to actually enter the base they're guarding! Sheppard goes to the base director's office and learns about the deaths, and the reason for the monkey-freezing experiment. Astronauts are to be sent into space as frozen corpses and revived on Earth after their trip. Computers would steer the ships that the dead astronauts would ride on. I rewound this scene twice and never figured out what the purpose of sending a dead guy who can't take observations into space would be, and don't know what anyone would expect them to know when they got restored to life that they didn't know before they were cryogenically frozen and thawed. (I found myself imitating John Tuturro's "That don't make no sense!" from O Brother, Where Art Thou? when watching this scene, completely involuntarily.)

The middle 75% of the movie is taken up with a tour of the base, with the scientists and military people in charge of various experiments explaining them to Dr. Sheppard. We get to see a solar mirror weaponized to melt down a steel bar and ignite a cardboard model of a city--and, MUCH later in the third act, a scientist gets taken out by the solar-powered death beam. The solar mirror was meant to be the single power source for a space station (no backups and no failsafes are intended in the project, I guess; I cannot even begin to imagine the circumstances when "if anything goes wrong with our power source, everybody dies" would be accepted as sound space-station building practice).

We also get to watch two people do acrobatics in a room that simulates weightlessness through the probably-bullshit technique of strong electromagnets in the walls and metal-mesh clothing on the astronauts-in-training and a dozen tuning forks in an array wobbling around as they are used to somehow detect a jet plane flying over the installation. The observers on the ground and in the radar shack don't see anything, but the tuning forks are so loud they set an office chair on fire. Typing this summary makes me realize the movie sounds like a fever dream.

The next dead weight scene is where Dr. Sheppard visits NOVAC, the cargo van-sized computer whose acronym I didn't write down and won't look up now. Dr. Zeitman and his assistant use NOVAC to run every system in the facility as well as the two robots Gog and Magog that handle tasks too dangerous for humans to perform. The identical robots are actually pretty cool, with tank treads, a conical body design reminiscent of Daleks and spheres with lots of doodads and lenses on it for heads. An excruciatingly long scene where the holes-in-paper-tape OS is used to give instructions to each robot follows. Only one of them ever operates at a time, making me believe only one dwarf actor was hired by the production to be crammed into the robot shell and make its arms flap around goofily. A lengthy conversation follows this scene, where Sheppard, now head of security for the project, chastises Dr. Zeitman for not properly throwing away all the old ribbons of paper with holes punched in them that control Gog and Magog. Then there's a visit to the atomic pile and more exposition about how the base is powered by its own nuclear reactor.

Next two more attacks are carried out--one scientist dies of radiation poisoning in her lab and the two acrobat / astronauts are killed when the centrifuge they're riding spins them much faster than their bodies can withstand. A conversation between the surviving scientists and Sheppard ensues, with lots of backbiting and recriminations. Obviously we're being set up for a "Ten Little Indians" plot where the last scientist standing is the killer, except that isn't it at all.

A fiberglass plane (which makes it radar-invisible) is beaming instructions down to NOVAC, Gog and Magog to kill the scientists off and cap the scheme by detonating the atomic pile and wiping the secret installation off the map completely. Obviously this is the work of the USSR, and stock footage of three different kinds of jets are thrown at the problem and their scenes are intercut with Sheppard, using a flamethrower (!) against Magog and then Gog. The base is eventually saved, although I find myself feeling really bad for the Soviet hacker stuck in a jet plane trying to program instructions for a pair of clunky robots with a roll of paper tape that has holes punched in it. That was the actual programming system for Colossus, the codebreaking machine invented by Alan Turing in the forties, by the way. So at least one thing in this movie wasn't completely ridiculous.

But overall I can't recommend this one to anybody. The story starts out with a pair of gruesome deaths and then goes virtually nowhere for the middle three-fourths of the film and then everything in the world happens in the last ten or fifteen minutes. Other than the totally sweet paintings of rockets taking off over the opening credits and the novelty value of seeing William Schallert's character murdered by an AI fifteen years before he gets blown up by another one in Colossus:  The Forbin Project, there's virtually nothing to recommend this one. I wish I didn't have to write that sentence. Certainly I prefer my renegade-robots-on-the-loose movies to be better written and paced. Who would have thought that a movie existed that would make Chopping Mall look good by comparison?
Posted by Tim Lehnerer at 6:49 AM