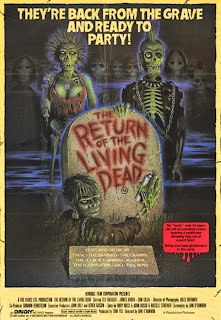 The only reason this isn't the best zombie movie ever made is that George Romero made Dawn of the Dead at the end of the seventies. It's one of the best horror movies ever made, and one of the best movies of any genre made in the 1980s. And despite the inherent nature of filmmaking as a collaborative medium, it's Dan O'Bannon's screenplay and direction that make the movie as good as it is. His subversive take on the material is the perfect tone for Reagan-era movie punks versus indestructible cannibal junkies.

The film starts with a notice that the events in the film really happened, and that the names haven't been changed from the real people that they happened to. Uh-huh.

At the Uneeda Medical Supply warehouse, new guy Freddy is being shown the ropes by lifer employee Frank. The ropes, shipping forms, bedpans, prosthetic limbs, split dogs (for veterinary studies), human skeletons, frozen cadaver room (with one cadaver), and the barrels in the basement full of chemically-saturated corpses that twitched and jumped around when exposed to a chemical called Trioxin.

It seems--according to Frank--that an accidental Trioxin spill at a V.A. hospital in Pittsburgh caused the dead bodies at the hospital morgue to briefly mimic life; the gruesome incident and subsequent government coverup inspired George Romero to make Night of the Living Dead, which the film namechecks openly. Barrels with the dead bodies and chemicals were accidentally shipped to the warehouse decades ago and have been sitting in a corner of the cellar covered with dust and cobwebs ever since.

Frank and Freddy go down into the basement to gawk at the barrels (which have a 1-800 number stenciled on the sides in case there's an emergency). Frank demonstrates how solid the welds on the barrels are by smacking one. It immediately breaks and sprays him and Freddy with pressurized barrel-aged evil government chemicals. They pass out on the cement floor as the body in the tank liquefies and the opening credits let the audience know just what kind of movie they're watching.

When they wake up, they call Burt, the owner of the warehouse; he storms in, super pissed off (and justifiably so). The research cadaver in the freezer room is screaming and pounding on the door and cutting its head off doesn't stop the body from attacking the men. They wind up using a convenient bone saw to slice the reanimated corpse into more manageable pieces and carry them over to the crematorium across the parking lot, planning to dispose of the pieces so that the chemical spill and zombie incident can't be traced to the Uneeda supply company and Burt won't spend any time in Federal prison. After a few transparent lies Ernie the crematorium operator is attacked by a severed arm and with that proof he decides that turning the cadaver into ash and smoke is the way to go.

Meanwhile, Freddy's friends are stuck with nothing to do hanging out waiting for him to get off work. I have to say I'm not sure all these people would really be hanging out together in the real world, but maybe Louisville in the summer doesn't have anything for teenagers to do if they don't like sportsball and they're all the only people they can hang out with. They decide to kill time by breaking into the Resurrection Cemetery and play Jet Black Berries while Trash does a striptease on a mausoleum vault--this scene launched Linnea Quigley into horror superstardom and jumpstarted puberty for thousands of horror fans in 1985. Thank you, VCRs, for allowing us to sneak this kind of nudity and filth into our homes under the guise of a perfectly respectable gore-soaked zombie apocalypse movie.

The two plotlines come to a head when the cremation is finished--the Trioxin-tainted smoke goes up into the sky, seeds a few storm clouds, and comes back down to earth in a torrent of rain. Which sinks through the dirt and drips onto every body in the cemetery. Who wake up, burrow up from under the ground, and immediately start hunting for prey in a frenzy. The punks split up and flee in the storm (both groups thinking Trash is with the other; after her death scene, Linnea Quigley shows she's a real trouper by spending the entire rest of the movie both nude and in zombie makeup--that can't have been any fun on a nighttime filming schedule). One group winds up at the crematorium and the other at the warehouse and the parking lot between the buildings becomes impassable within minutes as indestructible zombies that can talk, plan and think start searching for the people they know are hiding out there somewhere.

The cast gets whittled down piece by piece (Suicide's the most physically imposing person in the cast and the first to go, dead before he or anyone else in the cast realizes what's going on). And both groups try to address the situation--more than one escape plan is hatched by the two separate groups, and more than one attempt to fortify the crematorium takes place (costing the life of one more punk as he gets dragged halfway out a window and his brains chomped). But those thick walls and steel doors are also keeping the survivors in, and two of them don't have any blood pressure or pulse after the chemicals hit them. And even beyond that, it turns out that the U.S. military has a contingency plan in place if the chemical ever got released into the world. Calling that number on the side of the tanks is the first thing everyone should have done, and the last thing Burt winds up doing...

The best thing about this movie--other than the fantastic punk-rock soundtrack, convincing performances, stomach-churning gore set pieces, assured direction, and constantly escalating menace to the surviving characters--is the script by Dan O'Bannon. He apparently rewrote a standard spam-in-a-cabin style horror film to contain lots of his trademark weird humor and a viciously jaundiced look at the way systems break down and best intentions pave the road to hell. Moments of self-sacrifice to protect the group go horribly awry, as does the last-ditch attempt from the military to keep the Louisville ghouls from overrunning the entire state. There are plenty of desperate attempts to fix the problems and they all go wrong one way or another (even at the beginning with the one cold-storage cadaver, when it charges out of the storage room and attacks the person who didn't have a weapon). There are little touches of humanity in the middle of the chaos--Chuck and Spider hug when they see they're both alive and run in to each other in the third act, and Ernie the mortician does what he can to keep Tina alive and sane when they're trapped in the funeral home attic with a turned-and-hungry Freddy trying to bash his way in to kill them both.

This is also a groundbreaking movie--it's the first time zombies were only hungry for brains. They're all in chronic pain from rigor mortis and decomposition, and eating human brains is an endorphin fix that temporarily cures the pain of being undead. None of them are happy to be resurrected; they didn't ask for a second life any more than they were given a choice to be born the first time. But even though there's an element of tragedy and pathos to their existence, they're monsters to the bone and they're each capable of killing a dozen or more people in an attempt to sate their hunger. They aren't suave vampires gliding through the foggy night in search for prey--they're vicious menaces that can work together if they have to (one of them calls for more police and paramedics on the radio; another stands out in the rain directing traffic to lure in more victims). It's the combination of savagery and intelligence that makes them such interesting undead, and I'm willing to bet less than a tenth of the people who know zombies eat brains know where that plot device came from.

I've watched a few dogs for this project, and settling in to see entropy and self-interested panic in action brought a big smile to my face. Watching this movie is like settling in for a conversation with an old friend. It's exactly what I needed, and if you haven't seen it yet it's exactly what you need too.
Posted by Tim Lehnerer at 7:08 AM