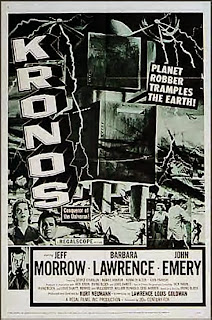 When you've seen a lot of these kinds of movies, you realize that a lot of them are structurally similar, even when the subject matter isn't necessarily the same. The remake of The Wicker Man, for example, is really only stupid and funny for the first fifteen and the last fifteen minutes; the middle is quite a slog. Which makes it structurally very similar to Gymkata, of all things. So contemplate this on the Tree of Woe:  Kronos is like a Taiwanese knockoff of The Giant Claw, but not as charmingly awful. Even the credits are lackluster and generic, with the grey block letters of the title in the background and the cast and crew in smaller white letters. It's almost like Otto from Repo Man bought a ticket to Movie.

Then the movie starts, and a flicker-glowing satellite wafer arcs towards the camera. It disgorges a flickering light that streaks out of the sky and down to Earth, stalling out a pickup truck and then possessing the driver. The alien-possessed driver goes to a military base, where he has a competition with the security guard about who can deliver their line in more of a robotic monotone, then whacks the guard with a pipe wrench in a fit of pique for losing and sneaks into the base. Whatever it is that possessed the truck driver goes into the base director's body and takes it over.

The narrative then grinds to a halt for some paperwork and for the evil space brain to look out a window. Two of the scientists (Doctors Gaskell and Culver) at the research base happen to have studied the space ship from earlier and realize that it's changing its trajectory in a manner that asteroids and meteors cannot do. A draggy interlude while they develop photos of the UFO and wait for the semi-trailer sized mainframe S.U.S.I.E. ("Synchro-Unifying Sinometric Integrating Equitensor", which sounds like science terminology Mad Libs to me) to plot the anomaly's course. The computer gets the Eisenhower-era equivalent of the Blue Screen of Death and the evil space brain's hot rod remains undetected for the time being. Confronted with this massive setback, Dr. Gaskell and his girlfriend demonstrate American can-do spirit and knowhow by almost going to the movies before going back to work.

The UFO now discovered by some Science People, they activate America's stock footage of V-2 rockets and superimpose some prop newspapers over the scene. They're assuming the UFO is an asteroid that will hit the Earth (because they clearly did not see that it is a flying saucer, not a big rock) and plan to nuke it to death before that can happen. A whole bunch of countdowns and footage of people looking at awesome 1950s military hardware later, the "asteroid" is almost completely unharmed and the head of the base collapses to the floor in the grip of a 50s-strength migraine.

The UFO passes over New York City and splashes down in the ocean west of Mexico (uh...what?) and the two scientists who took the first look at it travel to Mexico to try and figure out what the heck is going on. Stock footage of a helicopter is used to survey the scene (I swear they use the exact same shot twice in a row) and Gaskell's girlfriend sneaks her way into the investigation once they get back to their base of operations.

Meanwhile, two things have happened:  in one plot thread, the project director has been confined to a mental institution for what everyone assumes is a nervous breakdown (and the alien intelligence that took his brain over loses control of him from time to time), and in the second narrative strand Dr. Gaskell hikes his shorts up to his nipples before dinner in Mexico and some portentous calm-before-the-imminent storm dialogue.


When the project director wakes up, he starts telling his psychologist about alien brain parasites and having his mind controlled by beings made of electricity from beyond the stars. In the most realistic aspect of the film, this leads to him being tied to his bed and heavily sedated. The exposition of what the heck the aliens are planning to do is delivered through his therapist's case notes--the evil electric space parasite is going to use an "accumulator" to suck all the electricity out of the earth to feed its home planet.

The storm Gaskell was musing about arrives more than three fifths of the way through the damn movie when the alien intelligence wakes up and reaches out for its flying saucer, drops off an automatic world-conqueror device in the form of a remarkably non-menacing robot that looks like two cubes stacked on top of each other with a little half-dome thing and a couple of doodads on top of its "head". The effects used to realize this awesome planetary threat are underwhelming to the extreme, especially as the film's score oversells the hell out of the sight of the giant robot. Even better:  when it comes time for the filmmakers to show the Lego world destroyer in motion, it's a Terry Gilliam-style cutout animation with its legs rising up and down, but never bending or pulling it forward.

The robot eats all the electricity from a model of a power station, survives a nuclear bombing (it turns out that a device that eats energy can't be hurt with a massive blast of atomic energy), and it's up to Gaskell and Culver to think of a half-baked sciencey plan that sounds like utter gibberish to me in order to save the day. The plan pretty much boils down to making the robot throw up instead of eat, draining all its power and leaving it inert. Which they do right outside of Los Angeles, and the stock footage used to show the device breaking down is an atomic bomb blast. That's probably going to affect real estate values on the West Coast for a couple thousand generations or so...

Some times you just want to watch a stupid-looking monster get killed by the power of whitebread scientists and this movie should fit that bill whenever you have to scratch that particular itch. Overlong even at 80 minutes and taking forever to get going, it was giving me flashbacks to Gog as the science heroes spent time in their lab, but thank goodness they eventually go outside and start doing stuff. It's thinly plotted, woodenly acted, made up of at least fifteen to twenty percent stock footage and wastes 50s B movie all-star Morris Ankrum in a tiny role as the psychiatrist who gets killed by the evil space brain. Even by the relaxed standards of American 50s giant monster flicks it leaves a lot to be desired. But everything wrong with it is the reason I'd recommend it to people who haven't seen it and are still curious after reading this review. You can pick one that's so much better, yes, but some times you really want to see a movie that can't get much worse.
Posted by Tim Lehnerer at 6:58 AM