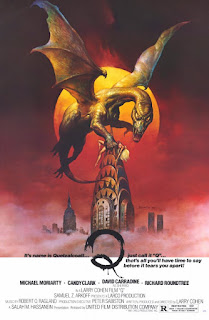 Written and directed by Larry Cohen

This film is one of my favorite entries in the microgenre of the horror procedural. One of the most effective ways to get your audience to buy the impossible is to present it to a character who doesn't believe in what is occurring, but gets convinced over time with the accumulation of clues and observation that whatever it is (say, the colony of gigantic ants in Them!) is really happening. It's a tiny genre, which is really too bad. Looking over some of the movies that use this plot (Count Yorga, Vampire; the 1970s Sugar Hill; the aforementioned Them!) there's a common thread of realism and hard-nosed skepticism that helps convince the audience of what's going on--after all, the protagonists of the movie didn't believe in vampires, and now they realize they've got to defeat one or be killed. And, in the case of this week's movie, who would be more hard-nosed and skeptical than a New York City homicide detective in the middle of the Me Decade?

The movie starts off with a bang, or perhaps an "AAAAAHHHHHH! [CRUNCH]" with a window washer irritating a shoe-store owner about 300 feet up off the streets of New York City. He thinks she likes him for his extra care that he takes to keep her window clean; she thinks he's a creep and can't stand the sound of the squeegee on the glass any more. And not even three minutes into the movie, including credits, the window washer gets his head bitten off by something that attacks him from above. Then a jump cut to the ground, where David Carradine and Richard Roundtree's detective characters gripe about having to go up to the parapets to look for the dead window washer's head and try out a few theories about what could have decapitated him (Carradine, playing Det. Shepard tries out the not-particularly-useful theory "maybe his head just got loose and fell off" after he's informed that there were no broken windows or falling debris above the floor where the window cleaner died). Because investigators are taught to start from the most obvious principles and guesses first, and then get farther and farther afield if the obvious theories don't pan out. And they'd have to go pretty far afield to say "a pterodactyl monster ate his head". I'm guessing that might be five or even six places down on the list of potential causes of death.

From there, we take a quick jump cut to a Chinese restaurant. A cavalcade of representative hair and facial-hair styles are demonstrated by the criminals, who discuss an upcoming job with Jimmy Quinn, a pleasantly smiling getaway driver who dictates the terms of his involvement and what cut he expects from the job. The other criminals immediately shoot down what he says and tells him to answer quickly or never; they think he's a loser to the extent that they even tell him not to eat too much of the cashew chicken. And Jimmy, for the time being, smiles and nods and says he's got the possibility of another job on the horizon.

Another jarring cut drops us off in a hotel room with all the conveniences--air conditioning, room service, HBO and a flayed corpse on the bed (with a surprising lack of blood on the sheets). Detective Powell, played by Richard Roundtree, is working a few leads about the murder and hears that the victim was going to visit a museum--and there can't be too many of those in New York City, right?

Meanwhile, the gratuitous nudity provided by a topless sunbather is interrupted by an attack by something that dives in out of the sky and carries the poor woman away kicking and screaming. A dozen or more pedestrians get spattered with blood but nobody can see what's going on in the sky.

Jimmy tries out as a piano player at a semi-dive bar, apparently going for a legit job instead of counting on larceny to fill his wallet. The song he sings, "Evil Dream", was improvised by Michael Moriarty live on set, incidentally. While he's noodling around like a jazz goofball, Detective Shepard comes in for a drink and the bartender asks if they ever found that window washer's head. The bartender starts playing something on the jukebox as a way to tell Quinn that he has not passed his audition and he walks by Shepard on the way out to tell the mafia that he'll drive for their diamond robbery ("Sounded okay to me." "Yeah, what the fuck do you know?").

The diamond robbery goes about as well as they do in any movie where there is a diamond robbery; the alarm goes off, someone gets shot in the store, Jimmy is missing his keys (one of the other criminals took them to make sure he wouldn't run off on them) and he gets hit by a cab walking away with the diamonds, which he loses when the taxi hits him. Quinn makes a call to his lawyer and sets up an immediate meeting at the mouthpiece's office in the Chrysler Building (true to the way his luck's been going the lawyer not only refuses to talk to him but has locked and bolted the office door). While dodging a security guard in the maintenance and storage rooms at the top of the skyscraper, Jimmy stumbles across a broken window pane in the tangled mess of access ladders, pipes and building supplies, and then a nest made of branches most likely liberated from Central Park full of chewed human bones and a massive greyish egg. Suddenly his day has gone from bad to worse to surreal, and Quinn sneaks away before the thing that put that nest together comes back--but not before bumping into a skeleton with only a few scraps of meat and splashes of blood left on it.

The next attack takes the life of a high-steel construction worker--the poor sap is the youngest guy on the crew and his boss steals his lunch just to tick him off (and because his wife makes a better lunch than the boss is used to). All that's left to mark his death is a blood-splattered hard hat.

Now back to Shepard, who is talking to a museum curator about Aztec sacrificial rites; the egghead points out that if it's an authentic Aztec-style sacrifice rite, the victim has to consent willingly to being skinned and killed. This raises more questions than it answers because sane people with jobs, spouses and families don't fly across the country so that someone can peel their skin off and kill them for the greater glory of Quetzalcoatl. While looking through some reference texts the curator loaned him, we get a line from David Carradine that might as well be Larry Cohen speaking directly to the audience:  "It wouldn't be the first time in history that a monster was mistaken for a god".

And that's the three plotlines--monster attacks, homicide investigations and Jimmy Quinn, who suddenly finds himself in possession of some extremely valuable information about the monster attacking the city. He proves himself to be a genuine little shit by extorting a "Nixon-style" pardon from the city for any crimes he may have ever committed in the past and a million dollars tax-free. His girlfriend is repulsed by his new status as a big little man and Shepard comes within seconds of talking him out of spilling the beans on where the monster's nest is. And the gangsters that want to have a little talk with him about a diamond robbery gone wrong? He leads them up to the maintenance section of the Chrysler building by saying that's where he stashed the stolen jewels and he cheers the winged serpent as it eats them. But the people running the city have a choice to make, and after a few more innocent people are killed and eaten they decide that a million dollars and letting a lowlife get away with some things is cheaper than searching for the monster and hoping to stumble over it sooner rather than later. Which leads to New York's finest hanging in tiny little window-washer baskets firing submachine guns at the monster as it returns to its nest. Divine figure or not, there's been a few advances in firearms since it last preyed on humanity, and it might just be that the .45 slug is mightier than the serpent...

I like that Larry Cohen played this about as straight as you can. There's a few goofy shots of pigeons flying or strutting around in the nest, but other than that he lets the human characters provide the humor rather than the David Allen-animated beastie. The helicopter footage of the city is appropriately inspiring (and there's some nifty zooms in on a victim or two that can't have been easy to carry out with the cameras of 1982). The plot sounds ridiculous, of course--an Aztec cultist is skinning willing victims to bring a monster back to life and attack the city--but the movie plays fair with it, including a scene where the cops stop a sacrifice in progress and the guy on the altar attacks them. And instead of the usual Stupid Chief, we get someone who looks at the completely accurate report from Detective Shepard and throws it away, telling the investigator that he'll be looking at a psychiatric evaluation if he submits it again, even though it appears to be completely true. And Cohen truly makes a character out of New York City, shooting with live sound on crowded streets and back alleys, dive bars, hotel lobbies, museums and other urban spaces. And the religious elements are played just as straight (it cannot be an accident that the lizard got prayed back into existence and then laid an egg without there being a second lizard to knock it up; the egg is a virgin birth and just as much a miracle as Quetzalcoatl returning to the Americas after centuries). Those religious elements work in Jimmy Quinn's favor at the end; the evil priest wants to kill him both for spilling the beans on where the feathered serpent was hiding and as an offering to the god. But the ceremony can't proceed until Quinn says a prayer to consecrate himself as an offering and the whiny little sneak discovers some spine he didn't know he had and refuses. Score one for atheism! And speaking as a skeptic myself, that's a wonderful way to keep the monster vulnerable. Even if a deity did exist in the world, one that randomly grabbed people to dismember and eat isn't one that deserves any human devotion. Even the coward who can't get a job playing piano in a bar knows that one.
Posted by Tim Lehnerer at 10:27 PM