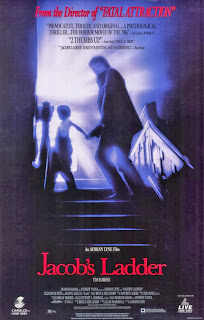 Some questions you don't want to find out the answers to. Is it worse, one might ask, to think that the world is corroding around you and leering horrible faces are everywhere? Or is it worse to find out that it what should be hallucinations are actually what's really happening? Is it worse when the monsters are in the shadows or when they step into the light?

The film starts with a disorienting sequence of combat in Vietnam; Jacob and his fellow soldiers are sitting around getting high and cheerfully insulting each other when a call comes in that there's movement in the treeline. In the midst of the explosions and gunfire some odd things are happening--some of the soldiers are fighting while others hit the ground convulsing or vomiting. Jacob runs off into the forest and is bayonetted; he hits the ground and wakes up in the present day with a jerk, having fallen asleep on the New York City subway while reading Camus. He's still in uniform, although now it's Post Office blue instead of Army green.

Having almost missed his stop, Jacob finds that the street exit is closed anyway and makes his way from one side of the platform, over the tracks, to the other. The subway station is actually filmed to look less inviting than the Vietnam sequence. It's a vast, echoing, chamber full of dripping water with rats in evidence. It's lit by stuttering lights.that add to the air of urban decay. He comes within a second or two of being hit by a train, with everyone inside pressing their faces to the windows as they pass, lit from below and looking like a bunch of Nosferatus in the grimy fluorescent light.

Making his way home after midnight (and mentioning that he was late because he grabbed some overtime hours at the post office covering for a frequently sick coworker), his rotten day improves as his girlfriend(?) joins him in the shower. Then it's time for a restful sleep full of Vietnam flashbacks covering the time immediately after he was bayonetted. A lazy morning of flirting with Jezebel and looking through old photos turns melancholy as Jacob is blindsided by a snapshot of his dead son, Gabriel and bursts into tears.

Soon enough, a bad back drives Jacob to see his chiropractor, played by the earthly incarnation of New York City (Danny Aiello, who is the only Brooklyn Guy I ever really want to see in a movie). A jarring "deep adjustment" to Jacob's neck gives him another flashback, and he mentions offhandedly to his back cracker that he's been having hallucinations more and more frequently--they're apparently bothering him when he's sleeping and awake. And on the way back from his appointment, a giant lumbering 70s sedan almost flattens him while he's walking down a narrow alley; there's a leering demonic face in the back window looking at him as he dives for cover. And that cannot have been any good for his poor back.

A trip to a VA hospital makes Jacob wonder if he's lost his mind or merely in the process of losing it--there's no record of him as a patient, but he remembers years of visits. And the admissions nurse appears to have teeth growing out of a wound in the back of her head, or alternatively the weird visions he's been having are more prevalent, and no longer limited to flashbacks of his time in Vietnam. But either one of those explanations don't fit comfortably with the other oddness going on around the edges of his life--his doctor died recently, and another therapist at the hospital says it was when Dr. Carlson's car exploded.

Jacob tries to forget his troubles and relax at a party, and the cinematography shifts--where before he was seen walking down alleys, tunnels and hallways by himself he's now pressed in as the partiers fill the apartment dancing and flirting. As he escapes the throng and gets a palm reading from another partygoer sitting on a stairwell the music changes in the background from "Lady Marmalade" to Marvin Gaye; or, to put it another way, from a song where the chorus is "will you sleep with me tonight?" in French to a song with the refrain "What's goin' on?". Maybe I'm just a massive pop music enthusiast reading too much into the soundtrack choices, but I think both songs were picked for effect at the screenplay stage. The palm reader finds it incredibly amusing that Jacob's life line shows that he's already dead. But as a Louisville paramedic from the mid-80s could tell you, dead people don't walk around and talk.

At the party, things take a turn for the slightly Bacchanalian, with closeups of laughing partygoers, the gyrating bodies of the dancers (and a couple that have retreated to a couch for making-out purposes) intercut with an increasingly disoriented and haunted-looking Jacob Singer. This sequence marks the first appearance of the shaking-head figure, a strange humanoid whose head moves in a constant hyperkinetic spasm, erasing its features in a blur of motion. As soon as he glimpses the shaking-head creature, the party becomes even more oppressive to Jacob (and he sees Jezzie grinding against someone else while dancing, soaked with sweat as her partner's tail and wings rub against her). He hits the floor screaming in terror, effectively killing the party and embarrassing his girlfriend beyond belief; there's a jump cut to him back at his apartment and Jezebel noticing he's running a fever of 106.

He winds up in a bathtub full of iced water as a shock treatment to bring his temperature down and wakes up in bed with his ex-wife and with his late son (an uncredited Macaulay Culkin) wandering into the bedroom. He remembers his time with Jezzie as a compelling nightmare and the viewer, at this point, has no idea which of his two remembered lives is the real one. Then he wakes up in the bathtub again--back in the original life, with an ex-wife and a dead son. Did he get a glimpse of heaven? Was it just a fever dream? Could it have been both?

A phone call from an old Army buddy leads to a conversation in a dingy pool hall where the other guy says he's been seeing shadowy figures following him and fears that they'll carry him down to hell; he's relieved to the point of tears when Jacob says he's seen them as well. Things take a turn for the surreal and horrifying when the old friend turns the key in his car ignition and a bomb goes off, killing him instantly and coming close to taking Jacob's life as well. This sets off another segment of Jacob's flashbacks, and it becomes obvious at this point that the flashbacks are progressing farther and farther, with each new shock giving Jacob one more memory of what happened to him that night in Vietnam.

At the Army buddy's funeral, the rest of the unit winds up talking around the issue of what he saw (or thought he saw), none of the veterans willing to speak on the issue in front of their families. They wind up on the roof of an apartment building comparing notes where nobody else can hear them and decide that they were possibly exposed to something during their service in Vietnam that is having delayed psychological effects. Of course, being crazy doesn't make your car explode. And even if you're paranoid, there can still be someone following you. Someone like the guy watching the group of veterans exit the lawyers office, sitting in a car with U.S. government plates. And a few days later, the lawyer drops the case after saying there's no record of Jacob Singer or any of the other veterans having served in Vietnam.

Jacob is snatched off the street by a couple of heavies in a car with government plates; they want him to shut up like his friends did. He declines and in the ensuing fight he gets tossed out of the car and eventually winds up strapped to a gurney in a hospital, unable to move. The hospital segment is one of the standout sequences in the movie--full of shots that shouldn't necessarily be frightening (the closeup of a gurney wheel isn't inherently ominous) but full of escalating menace, with people lying on the hallway floors like discarded dolls and paint peeling from the ceiling during the good parts. Incidentally, Tim Robbins has a fantastic face for horror movies, communicating bewilderment, misery and fear without saying a word and turning up the intensity scene by scene as things get more surreal and horrifying in the hallway. It's a real shame that this is his only horror film. I'd like to think that he's got a part waiting for him in a Lovecraft adaptation if he ever wants it.

One more visit to his chiropractor (who busts him out of the hospital in a scene that only makes sense in light of later information) and straightens him out physically and mentally. He returns home and gets a phone call from a chemist that said he worked in a chemical warfare unit in 1968 and that he has information that Singer needs to hear. It turns out that Agent Orange wasn't the only thing dusting over troops without their knowledge or consent. And that's only the start of the knowledge and horror waiting for Jacob Singer in the full blaze of enlightenment...

New York City is the most photographed and filmed city in the history of the world, and I don't think I've ever seen it look as hostile and frightening as it does in this movie. Even The Warriors, about a gang on the run for their lives and surrounded by enemies, doesn't look like the NYC of Jacob's Ladder--steam gouts from the sewers, the lights flicker and the rain pounds down mercilessly. The apartments and offices that we see are drab and dirty and the hospital descends into a smear of filth, madness, blood and severed flopping limbs. Even the normal people usually look frightened or hostile, and the demonic faces look starkly menacing. Everything looks dingy and soiled, other than the clean hazy light in the chiropractor's office and Danny Aiello is just about the only person in the film that talks to Jacob with patience and understanding.

There are two stories going on at the same time in this movie--the story of what is happening to Jacob and the related story of why he's seeing the things that he's seeing. A brief lecture on metaphysics from his chiropractor explains both at the same time, and tie all the seemingly unrelated events and plot threads together in a surge of revelation. Nobody can accuse the film of cheating with its narrative, either--there are moments ten or fifteen minutes in that have a completely different meaning the second time one watches the movie, knowing the ending and seeing things in a completely new light. Once you know what to look for and the significance of some of the earlier statements the protagonist is even more doomed to make his climb in the last scene. It doesn't make his pain or fear any easier knowing the end, either. A bit like real life in that way, don't you think?
Posted by Tim Lehnerer at 6:55 AM