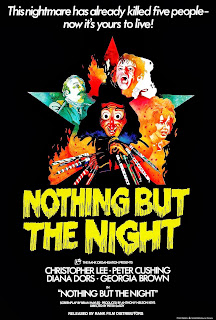 Screenplay by Brian Hayles, based on the novel by John Blackburn
Directed by Peter Sasdy

This is an odd duck of a film--not wholly successful, but with some images that will stay with you for a while, and with some interesting plot twists and turns. It's also, weirdly enough, the second movie from 1973 that features Christopher Lee on a Scottish island, a police investigation and a bonfire at the end. Odd how these things happen, isn't it? I'd never heard of Charlemagne Productions before seeing this one, and this film was their first and only release. If I had to guess, I'd say they were trying to be another Amicus, and if that was the case they hit the target dead-on. It's a real shame they didn't get another chance to show what they could do.

The movie starts with the murder of three of the trustees of the Van Traylen foundation--in each case, a black-gloved assailant causes the death of a rich and influential older woman (or man). One is pushed off a balcony, one shot from closer than point-blank range and one stuck in a car and pitched over a seaside cliff. To top off the mayhem, a bus crashes carrying thirty orphans being cared for by the foundation; none of them are killed, but one child--Mary Valley--is in the hospital raving through a fever dream about being burned in the aftermath of the crash. She doesn't have a physical scratch on her, though, and in fact the only person burned in the bus crash is even more of a mystery than Mary's psychosomatic problems, because the bus never caught on fire.

Colonel Bingham and Sir Mark Ashley join forces to figure out what the heck is going on with the murders (the former is a ranking police officer and the latter a pathologist at the hospital where Mary is being treated), which Mary is considered a potential witness to. Unless Doctor Haynes, a pediatric psychologist, can unlock the doors in her traumatized mind, the true story of what happened on the bus may never be known.

While Ashley and Bingham work together to investigate the killings, Haynes is sought out by a journalist, Joan Foster, who discovered that the bus crash survivor wasn't an orphan after all; her mother was a prostitute and triple murderer who served ten years in prison and now wants to be reunited with her child. Haynes and Foster meet with her and Haynes says he'll only do what he thinks is best for Mary's well-being. In an ironic way this makes Anna Harb, Mary's biological mother, trust him more than if he'd agreed off the bat to help Anna see her daughter again. It goes poorly when Anna gets to the hospital, with Mary screaming in a panic that she doesn't want to go with her mother. Anna is thrown out of the hospital and Haynes is discovered dead in the ward, stabbed in the head by Anna's hatpin.

Foster sneaks into Haynes' flat (they spent the night together before he was killed), and finds a tape of the hypnosis session where Mary panics about being burned. Around the same time, Ashley and Bingham do a totally boss 1974 database search and get a teletype explaining that all of the dead trustees left their entire estates to the Van Traylen foundation; none had any children and all lacked any family members that would expect a bequest from their wills. At this point Bingham doesn't think that Anna Harb committed the killings, at least not without considerable assistance. He and Sir Ashley fly to Scotland to commandeer the search for Anna, who is still wanted in connection with Yates' death.

While on the island and taking charge of a pretty slapdash attempt to find Anna, things keep happening that don't add up at all. A boat carrying five more Van Traylen trustees explodes (there's a very understated sick joke in the scenes where Ashley is doing an autopsy on the dead boaters; there aren't any pieces of them larger than a carton of cigarettes, and nothing looks particularly identifiable while he's studying the pieces). Foster makes her way into the autopsy shed, conditions for forensic investigation in rural Scotland not being particularly advanced. She plays the hypnosis-session tape for the doctor, and they hatch a theory based on the plainly impossible thinks Mary is saying on it.

They come to believe that Anna and Mary share a psychic link and that the mother is taking control of her daughter to kill the people she views as threats to their reunion--possibly without either person being consciously aware of what's going on! The truth is weirder and more horrifying than that, and the deaths of the trustees are not the only murders that Ashley and Bingham have come across...

I'd never even heard of this movie before (a Checkpoint Telstar tip of the hat to Chad Plambeck of Micro-Brew Reviews for letting me know about it); it's a little plodding in spots and not all of the ideas cohere particularly well, but in the third act when things get well and truly crazy the rug gets yanked out from under the viewer several times in rapid succession. The final images are stark, horrifying and strangely beautiful and many of the seemingly irreconcilable plot threads turn out to be connected all along.

Best of all is the chemistry between Lee and Cushing. In all the movies I've seen them in, they've been opposed to each other and it was a genuine pleasure to see them working together towards a goal with the same deep and meaningful friendship they famously shared in real life. The two characters have a long history together (neither one refers to the other by their titles, in a film that references social standing and class status with every character interaction) and the way both actors are relaxed in each others' presence sells the character work spectacularly.

All the secondary characters acquit themselves well, with Diana Dors playing a sullen, vicious, grudge-holding harpy and seemingly enjoying the utterly unglamorous part, a direct contrast to the times she was referred to as "England's Marilyn Monroe". For all her manifest faults she has a core of deep steel when trying to protect her daughter and if she's failed by some of the trying-too-hard red herring lines of dialogue, much more blame rests on the screenwriter than on the actress.

The scenery in the film is often beautiful, with the rolling hills in Scotland providing a backdrop for a story of murder and obsession. The night shooting at the end falls a little flat, with the characters not lit particularly well if they're not near the bonfire. But for a film made in 1973 they did a very creditable job. I was also impressed with how lived-in the hospital scenes were; extra notice to Peter Cushing for doing a typically excellent job looking like he knows what he's supposed to be doing with all the various props he handles in the pathology lab and later in the improvised medical facilities on the island.

Overall, I think the movie would work better for the viewer the less they know about it the more likely they are to enjoy it, let the plot twists wash over them, and enjoy the ride as they see where the story winds up going. I've seen a lot of these kinds of movies, and even though lots of pieces of information are in the screenplay, doled out bit by bit, I didn't manage to guess where it was going until the movie made it completely obvious in the last act. And I liked it well enough to avoid any cheap jokes for the entire review; that's got to be something.
Posted by Tim Lehnerer at 7:00 AM