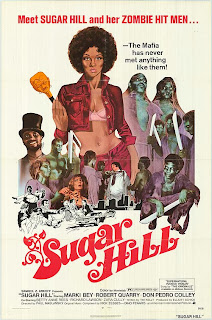 Sometimes it's not a great hero that a movie needs, or a great villain. It just needs a great performance from someone having the time of their life delivering ripe dialogue and gesticulating like a madman. Don Pedro Colley is unquestionably the MVP of this one; I wanted to see him every time he wasn't on screen and I started to wish that he and Vincent Price could be in a movie as crazy-ass supernatural beings yelling at each other. That's not to say that this movie would be unwatchable without Colley's input, but he's an absolute treasure every time he's on the screen.

The film starts with a voodoo ceremony performed by black men and women in antebellum clothing and face paint dancing and sacrificing to the loa, but with a Motown slow jam called "Supernatural Voodoo Woman" played over it. Polite applause after the ceremony finishes and a cut to a "Club Haiti" sign shows the viewer that this was an outdoor performance at a nightclub, not a religious rite. The audience looks incredibly middle-aged, white and square to be the ones enjoying a voodoo-themed revue, but cultural appropriation has always been a favorite pastime of the squarer set. I would have expected a little more Martin Denny than Berry Gordy for the soundtrack, but then again I'm not the one who managed to get a Motown track to open up an AIP revenge movie.

Langston, the owner of the club (wearing a shiny grey three-piece suit with scalloped lapels on the jacket; it's my favorite questionable clothing choice out of any movie I've seen, 70s or otherwise) chats up his girlfriend Sugar Hill after the show, talking about how he must be doing something right with his life because he has success in both business and personal matters. And in a 70s revenge movie, when someone says that it's a direct request to get smote by the fist of an angry God. A pack of goons (three white Mafiosi led by a black dude calling himself Fabulous, wearing a crime against fashion nowhere near as endearing as the scalloped lapel jacket) show up to give Langston one more chance to sell his club to a totally legitimate businessman that they represent. He tells them to tell their boss to stuff it, and that's final.

It's even more final than he thinks--the goons and their leader (wearing stockings over their faces but still wearing the same garish textile nightmares they had on during their negotiation--great plan, guys) jump him in the parking lot and beat him to death. Sugar has a breakdown when she sees his body.

One criminals-hanging-out-in-a-tasteless-living-room scene later, an ex-boyfriend of Sugar's is the homicide detective assigned to Langston's murder. Perhaps it is not the wisest course of action for Ms. Hill to state her desire to kill his murderers slowly and in agony while she watched; that's the kind of thing detectives are bound to remember when the bodies start piling up.

And of course they're going to start piling up--this is a revenge movie and the antiheroine's lover just got murdered by a group of thugs acting on the orders of a mastermind. That gives us the structure of the film in one easy stroke (the protagonist has to work her way up the list of murderers and end with the final boss, while eluding capture from someone who would be sympathetic to her need for revenge but honor-bound to try and stop it). What changes things here is that her plans for getting vengeance are closer to E.C. Comics than the standard Charles Bronson template.

Hill goes to the bayous of Houston-passing-for-Louisiana (complete with the Laughing Jackass Bird on the soundtrack during a pan shot of Spanish moss and an abandoned plantation, 8700 miles from its natural habitat). Her plan is to ask voodoo priestess Mama Maitresse to open negotiations with Baron Samedi, lord of the dead, in order to give her the power to avenge Langston's murder.

Having been warned Hill several times that there will be costs far beyond what she'll expect to pay, Mama Maitresse walks past some stock footage of swamp animals with her and eventually comes to an altar to Baron Samedi, lord of the dead in the middle of an old cemetery. Fog billows and thunder roars, and Samedi manifests out of thin air with shabby-genteel clothes and a booming, echoing laugh. It turns out that the Baron is much more interested in live bodies than dead souls, and he's also better than a level 26 Mastermind because a dozen zombies claw out of the ground to help Sugar get her revenge; most Masterminds can only manage six at best, as we all know.

A moment, now, to discuss these zombies. Sugar Hill was made six years after Night of the Living Dead established the rules for the risen dead in motion pictures; but since it's a movie set in a world of magic and gods instead of science and technology those rules get completely ignored. The zombies in this movie are from the old voodoo tradition rather than the existentialist one George Romero created; instead of shambling flesh-eating ambulatory corpses they have a will that is subsumed to their master. They follow orders and don't eat people unless commanded to do so. And as Baron Samedi pricelessly phrases it:  "Put them to evil use! It is all they know, or want!" Now that's a villainous command!

The zombie makeup is about as good as one was going to get on AIP's budget--grey body makeup, some super-painful looking silver contact lenses and cobwebs festooning old slavery-style shapeless clothes. And watching a pair of them rise out of the ground, look at each other, and smile? That's wonderful. There's some character there, just through silent expression and body language. Full marks to the zombie performers.

Now that Sugar has her zombies, it's time to put them to use. She tracks down each of the goons that killed Langston, isolating each one and telling them why they're dying before the zombies bring the curtains down. In each attack scene there's two interesting cinematic devices:  Sugar Hill has an Afro when she's using voodoo and risen slaves to get her murder on, while in the mundane world her hair is straightened. The second device is Don Pedro Colley lurking in the background, the Lord of the Dead sneaking around dressed as a laborer, a bartender, a gardener--always a servant, never a master. And always quick-witted enough to tell the white characters what they want to hear from a middle-aged black dude they consider themselves superior to just for winning the birth lottery. Watching him smile as he sees a fresh target is one of the quiet pleasures of the movie.

The two main lines of the plot intertwine from this point on; the criminals realize they're being tracked down and murdered as Sugar gets her vengeance, setpiece by setpiece (my favorite is the voodoo time bomb that burns a fuse down until one thug is compelled to stab himself to death, but they're all well-staged). At the same time, Sugar's ex puts together the pieces of forensic evidence and tries to convince himself that the impossible is happening (yes, it's another horror procedural, although in this case the detective isn't the viewpoint character; instead, he's another threat to the protagonist as he comes closer and closer to putting all the clues together). The movie saves its biggest shocks for the last two victims; the crime boss finds out what happened to his gang and how easily they can be turned against him as risen corpses, then when Samedi comes to claim his price, it turns out that Sugar Hill is a cleverer negotiator than he thought, to the detriment of a character that never did Hill any direct wrong, but it punished horribly nonetheless...

The thing that came to mind during this most recent rewatch of the film is this:  AIP built it out of parts they knew were successful from their own back catalog based on what made them money earlier in the decade. Thematic elaborate vengeance plan motivated by a dead love? Blaxploitation supernatural horror with a cop slowly piecing the impossible together? Robert Quarry as the villain? A take-no-shit female protagonist working outside the law? That's pieces of The Abominable Doctor Phibes, Blacula, Count Yorga, Vampire and Coffy all in turn. Where the film excels is in its ability to combine those pieces with something new and interesting, a way to create a whole greater than the sum of its parts. Don Pedro Colley's performance is the last ingredient, a way to take the different derivative pieces of the film and weld them together into something new. He's the cackling alchemist who turns lead into gold in this one, and the best reason (although not the only one) to check this movie out.
Posted by Tim Lehnerer at 8:15 AM