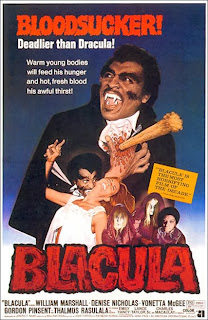 
If there was a Boy Scouts or Girl Scouts for B movie fans, one of the merit badges would be earned by getting suckered by a fantastic title and being horribly, horribly disappointed after watching the film attached to it. I have a friend who still holds a fully justified grudge over being shown Shriek of the Mutilated several years ago, and honestly, no movie could ever live up to that title.

Blacula, however, is the exact opposite of this phenomenon. It's orders of magnitude better than what any sane viewer would expect to get out of their viewing. There was some actual time and care spent on the script, a supporting cast made of talented jobbers (Elisha Cook. Jr. shows up as a hook-handed morgue attendant, but all the principals have lengthy IMDB credits lists) and the camera work and editing range from better-than-competent to striking. The soundtrack is R&B and soul songs, giving the work a distinct character of its own rather than the usual spooky orchestral and brass that a horror movie uses. But the success of the whole enterprise can be credited to William Marshall, who plays the title character as a tragic and doomed figure rather than a source of campy humor. His voice is theatrical, deep and expressive to an almost ridiculous level (it was a complete treat to hear him say "Count Dracula" and have it sound like rolling thunder). He manages to look scary even with the gigantic and rather goofy muttonchop-and-eyebrow makeup he wears during the attack scenes and almost pulls off looking cool while raising his cape and turning into a cartoon bat.

The prologue shows Prince Mamuwalde having a post-dinner conversation and drink with Count Dracula, hoping to convince the Count to use his influence in European society to put an end to the African slave trade. He went to an incredibly wrong castle for that task; as a white man in 1790, a titled member of the nobility and as a vampire Dracula has three different reasons to look down on Mamuwalde as nothing better than livestock. He decides to take Luva, Mamuwalde's wife, as part of his undead harem and sends a Renfield to beat the African prince to death. However, Mamuwalde is as agile and strong as he is smart and it takes a suckerpunch from the third mook to join the fight to knock the prince out. Dracula, irritated at his guest, decides that the worst possible thing to do to him is turn him into an immortal bloodsucker, but seal him in a locked coffin so he can never feed. What a dick.

Skipping ahead to (then) contemporary times, a pair of Odious Comic Relief gay interior decorators (also an interracial couple, and I'm wondering how 1972 audiences took that) are shown buying the contents of Castle Dracula with an eye toward selling the antiques to morbidly curious Americans at extortionate rates. This is the most realistic part of the movie. Upon seeing several sealed coffins in a secret chamber that the seller opened for them, the buyers declare that they want everything in the castle and the owner is only too happy to sell the coffins off as well.

The goods are all transported to a warehouse in Los Angeles (I like to imagine that the truck with Mamuwalde's coffin passes the one with Count Yorga's coffin on the freeway), and the two decorators start inventorying their haul. One breaks the old lock on the coffin and the other rips his arm open on a nail sticking out of a crate. Mamuwalde smells the blood and rises out of his coffin for the first time in eighteen decades, leaving both victims completely drained of blood before staggering out into the night.

At the funeral of one of the decorators, Mamuwalde is lurking around the parlor and catches sight of the deceased's friends; she's an exact double of Luva, the woman he defied Count Dracula to try and save almost two hundred years ago. He stalks her at night and manages to both get the woman's purse and get hit by a taxicab (he's invulnerable, but it still slows him down while he deals with the Odious Comedy Relief cab driver, who winds up completely drained of blood). He winds up sleeping at dawn in his coffin, holding the woman's purse. This is not creepy at all.

However, back at the funeral home, Dr. Gordon Thomas of something called the Scientific Investigation Division takes a closer look at the body, noting the puncture wounds in the corpse's neck. The Odious Comic Relief mortician says he hadn't embalmed the body yet, but it's completely drained of blood. The funeral director blames a vicious rat bite for the gaping neck wound that he cosmetically disguised to the best of his abilities and Dr. Thomas doesn't believe what he's seeing even as it's right in front of him. When he later gets a call about the cab driver's body, he checks on it at the morgue and sees it's also completely drained of blood and bears the same puncture wounds on its neck that he saw on the body of the interior decorator.

Doctor Thomas goes to talk to a police lieutenant about the multiple murders, and over the course of the film his investigation convinces him that there is a vampire in Los Angeles, crazy as that sounds. He's also positive that without ironclad proof of his suspicions he's much more likely to get laughed out of the station house or committed to a mental institution than to get any police support in hunting the vampire. The lieutenant is played by Gordon Pinsent, who played the President of the United States in the first movie I reviewed for this blog, incidentally. I'm always happy to see him show up for a few scenes; he's so naturally convincing that he's got to be the closest thing Canada ever had to their own home-grown Dick Miller. I should also note during these scenes that the police are friendly and cooperative with Dr. Thomas; I didn't expect a white cop in a blaxploitation movie to greet one of the protagonists with a friendly "Hiya, Doc!" when he entered the lieutenant's office and saw who was there. Occasionally every single white person in a movie from this genre is evil, and I liked the change of pace here. It also seemed pretty realistic, if Thomas was someone that helped with previous police efforts.

At the same time that Thomas is trying to track down a vampire in Los Angeles, Mamuwalde comes across Tina (the unknowing double of his wife), Dr. Thomas and Thomas' wife in a nightclub--in fact, as he walks into the club the band starts playing a song called "There He Is Again", which is either a way to shatter the fourth wall or just a hint for audience members that were out getting popcorn in the previous scene. And the band in this movie is a hell of a lot better than the lounge singer who did "The Words Get Stuck in My Throat" or the other one who interrupted Reptilicus to vocalize at us about Tivoli nights (points off for the ridiculous chicken-beak-boy dance movies, though). He returns Tina's purse, apologizes for startling her earlier and explains why he was following her earlier. Tina, for her part, is attracted to the dignified stranger and feels genuinely sorry for the loss of his wife. They start to grow together (to the point where Mamuwalde straight-up tells her he's a vampire and that he wants to turn her into one so they have eternity together, but refuses to change her without her informed consent). And it is love between the two of them--Mamuwalde's smile when they embrace the first time is one of genuine happiness, not the glowering evil rictus that I expected.

Doctor Thomas, for his part, almost gets himself killed when he exhumes the other interior decorator from the first act and is jumped by the reanimated vampire. He stakes the monster but realizes that he needs incontrovertible proof for Lieutenant Peters, especially because he never got permission to dig up the body he just pounded a wooden stake through. He calls the morgue and orders the attendant to take the cab driver's body out of the freezer and lock the room that it's stored in. He does one of those two things, and exits the movie completely drained of blood by the undead cab driver. Peters is utterly convinced when the vampirized cab driver is repelled by a cross and dies on exposure to sunlight, and all the characters are set for a tragic denouement courtesy of trigger-happy patrol cops, Thomas accidentally tipping his hand to Mamuwalde about his knowledge of vampiric weaknesses, and a mass attack of reanimated murder victims; Dr. Thomas makes a point during discussions with the police that each victim of the vampire can rise up and make one more vampire every night and I think all of them are there in the final attack scene.

Really, the best praise one can give the movie is that it completely transcends its irresistible yet goofy-ass title. Some of the screenplay elements don't hang together completely (I don't know why Mamuwalde would attack a photographer when he would have no idea what a camera is or why he needs to keep anyone from seeing that he doesn't show up on film), but when the movie's firing on all cylinders it's a vastly entertaining show. It's helped immeasurably by William Marshall, who might well have brought his own life as a Shakespearean actor to mind while portraying a noble and intelligent man doing reprehensible acts to survive (I doubt that anyone involved was making Blacula for the prestige, after all). It doesn't hurt that Marshall rocks a velvet cape even harder than Vincent Price, either.
Posted by Tim Lehnerer at 7:15 AM