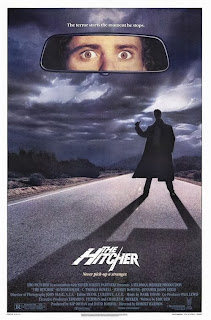 I graduated from Eastern Michigan University six years ago and I haven't set foot in a college class since then. I have to remind myself of this from time to time, because my usual anxiety dream is that I've got two days to write a paper for a class I've skipped for fourteen weeks. It's not quite a nightmare, but I always wake up from this dream with my heart going 200 miles an hour and it takes me a moment to remember that I already did all the paper-writing I'm likely to need to do. For that matter, I only skipped class once in three years (and that was to go see Diary of the Dead in its brief theatrical run; as a film-studies student, I was pretty much required to play hooky for that one). It doesn't matter. When your dreaming brain wants you to feel trapped and desperate, you're going to feel trapped and desperate.

I mention this because I'm sure everyone has their own personalized anxiety dream that pops up every so often, and because it feeds right into this movie, which has enough desperation as the walls close in on a trapped victim for a dozen nightmares.

Jim Halsey is driving a car across the country to deliver it to a buyer in California. Coffee, cigarettes and El Paso talk radio aren't enough to keep him awake during the night and he almost gets creamed by a semi truck after dozing off. He decides to take pity on a pedestrian stuck out on the rain and picks up a hitchhiker, thinking that having someone to talk to will keep him from falling asleep at the wheel again. The hitchhiker gives his name as John Ryder, and Jim probably won't have to worry about falling asleep too easily for the rest of his life.

A few conversational gambits fall apart, and Ryder stomps on Halsey's foot to keep him from stopping to check out a VW bug by the side of the highway. Halsey tells his passenger that the ride's over, and Ryder bullshits him into going ahead to a gas station before confessing to the murder of the VW's driver and pulling a knife on his benefactor. Ryder torments Halsey, telling him "I want you to stop me" for commanding Halsey to say "I want to die". Halsey realizes that Ryder didn't close the door properly when he got into the car and shoves him out of the car. (Note to homicidal hitch-hikers:  Always wear your seat belt.) Halsey drives on and Ryder picks himself up off the ground. And that's where the problems really start for our protagonist...

The next morning Halsey is passed by a station wagon with a vacationing family; he waves to the kids riding in the probably horribly unsafe rear-facing seat in the back and John Ryder waves back. Halsey's attempts to warn the family don't work at all and what seems like mere seconds later he sees the station wagon on the side of the road. The audience doesn't see what's inside but Jim does, and it's bad enough to make him throw up before he gets back in his car and drive on till he can call the police. At his first stop to look for a telephone, Ryder walks into the gas station just long enough to silently terrify the living shit out of Halsey and then hitches a ride while his almost-victim stands there numbly. Almost immediately Ryder--now driving the offroad truck he got a ride in--tries to run Halsey's car off the road, then peels away onto a dirt track off the side of the highway.

The second time Halsey tries to find a pay phone goes even worse, and he winds up almost getting run over by Ryder's truck and his drive-to-destination Cadillac splashed with burning gasoline. The middle-of-nowhere gas station he stopped it is completely destroyed, and I don't see how anyone working there would be expected to survive even if Ryder hadn't killed them first.

The third time Jim looks for a pay phone the waitress at a gas station / diner lets him in even before the restaurant opens though he's filthy, reeking of gasoline, desperate and can barely explain what's going on. His call to the police goes as well as that sort of thing does in a horror movie; Nash the waitress lets him know that the cops tend to treat anything that happens in the sticks as a very low priority and Jim finds a severed finger in his French fries just as two cops come roaring up and almost blow his head off. Things go from bad to worse when the police find a planted, blood-covered switchblade in Halsey's jacket pocket. And even worse, telling the police the absolute truth about what happened doesn't work because it sounds bullshit on the surface and worse the more they look into the details.

Halsey falls into an exhausted sleep at the police station, waking up when he hears gunshots and finds his cell door has been unlocked. He finds that everyone in the police station has been murdered just as other police roar in with lights and sirens in an apocalyptically bad case of "this isn't what it looks like". He flees into the desert, possibly assuming that the cops are in a shooting-first kind of mood. He takes a pair of Texas highway patrolmen hostage and has them put him in touch with a captain, who offers him a chance to turn himself in and prove his innocence. He takes the offer, which is probably the best one he's going to get as a suspected cop killer in Texas, and Ryder roars up in his stolen pickup truck to murder the cops driving the car he's in.

The hits just keep on coming, with Ryder constantly one or two steps ahead of Halsey and constantly able to predict and counter all of the younger man's moves and plans. Halsey's luck remains terrible, as he manages to sneak onto a bus only to see that Nash is on it too. The bus gets pulled over and Halsey comes within a seconds of one of the arresting officers shooting him after he gives up and demonstrates that he is unarmed. He and Nash steal a police car, announce their intentions to turn themselves in and are almost killed by two cars' worth of police who shoot their vehicle literally to pieces during the chase.

Ryder shows up again to make an already horrifically dangerous situation even more so, and another pair of police cars and a helicopter get destroyed. And again, Ryder's involvement is overlooked by the cops and they assume that Jim (and Nash) are the ones who caused all the death and damage. A short interlude later things look like they might be starting to get better, but Jim didn't realize in time that even from the second time Jim laid eyes on him, Ryder had been threatening and killing other people to get a reaction out of him...

This is one of the best-constructed horror movies you're likely to see. The threat is established early on and continues to escalate; every time Jim Halsey tries to do anything in reaction to Ryder's menace he makes his own situation worse and the authority figures aren't even unbelievable when they play into Ryder's plans. An outsider with no ID and nobody to vouch for him keeps showing up at murder scenes, takes a pair of police hostage, and keeps insisting on his innocence? Good luck, Jim.

The cinematography emphasizes how isolated Jim is when things start to go wrong for him--the first shots of him and Ryder in the car are close and intimate, lit only by the dashboard lights and a match to light a cigarette while the rain pours down in the night. Once Halsey is out in the daylight and Ryder starts toying with him there are several shots of his tiny human figure overwhelmed by the desert vistas around him. John Seale's shots isolate Halsey, and there's a couple standout wordless sequences that look to have been filmed from a mile away or more, with all the empty space in the frame emphasizing that Halsey is dwarfed by the forces that are arrayed against him. Contrast that with the scenes where Nash and Halsey are fleeing the police; even when they're being shot by the cops they're together in the frame and whatever else is going on, Halsey has an ally with him at that moment. And when he's walking between two semi trailers near the end, looking for Nash, the vertical walls of metal frame him on each side and show that he's trapped again, with the darkness and the trailers pressing in from the sides and above, pushing him down.

But more than anything else, the movie doesn't seem to be playing strictly by literal rules when Ryder's involved--not just the usual "the police don't have his fingerprints on file anywhere and there's no way to find out who he is" stuff that shows up in mundane procedurals, but deeper and more disturbing aspects of Ryder's abilities are apparent with a little thought.

The scene where his truck charges out of a closed garage is a great jump scare, but if the viewer tries to dissect the scene it winds up looking ridiculous. How did the villain know to open the garage door, move his car inside and keep it running so that he could scare the bejezus out of his prey? How did he know Jim would stop at that particular gas station instead of fleeing to the next one on the highway? In a realistic universe he wouldn't be able to do that. But Ryder doesn't have to obey the rules that everyone else in the movie's world have to obey. He knows when Halsey says his name in a whisper two rooms away. He can show up exactly at the worst time to make things worse and predict exactly what will happen when he acts because he's the boogeyman. He's not simply a murderous psychopath preying on the helpful nature of the drivers he finds. He's a supernaturally skillful manipulator that can do things nobody else in the filmic world can do. He's the dark walker on the highway, insinuating himself into an innocent man's life and ruining it by inches. He's a figure that might as well have walked straight out of a nightmare and appears to be the only supernatural being in the movie's world. Like Judge Holden in Blood Meridian I don't think he's the Devil, but I could certainly accept that he's a devil, going to and fro in the Texas desert and walking up and down the highways, thinking of and trying out new ways to hurt people physically, mentally and spiritually.
Posted by Tim Lehnerer at 6:37 AM