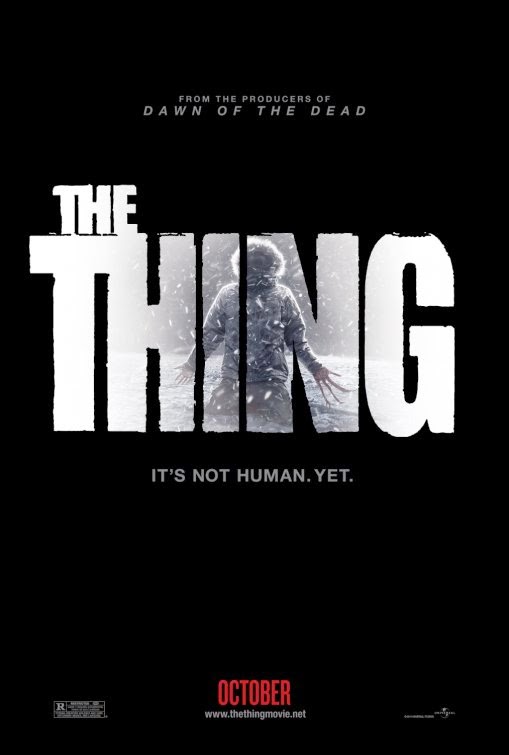 Oh, I wanted to like this one so much more than I actually did. I don't think there's anything wrong with trying to tell a story with a bunch of people doomed from frame one. Isolation and paranoia in my horror movie? Yes, please and thank you. But this one really doesn't jell into anything and it's hamstrung repeatedly by the need to do something so that people who watch this and then the John Carpenter film of the same name from 1982 won't spot any continuity gaffes. Which means that someone might have actually made a feature adaptation of Where's Waldo?, now that I think of it.

The film starts with a long pan over a glacier (if that's a CGI landscape, it looks fantastic). And my heart rises because they use the "John Carpenter font" for the opening credits. So did Doomsday; I like knowing the filmmakers liked some of the same things I do. There's a crawler vehicle working its way over the vast empty snow plain; four men are in the cabin. One's telling a dirty joke and another is tracking a signal from...something...with a machine and some headphones. He says they're right on top of it and the ground gives way; the vehicle falls hundreds feet into an ice crevasse. The crawler is stuck facedown in the ice.

Meanwhile somewhere else, Kate, a biologist is doing some kind of Science Thing to a dead bear. She gives her credentials (she's used to cold weather and is trained in vertebrate paleontology), and is informed that she's been volunteered to go to Antarctica to look at a specimen. Adam, the guy telling her about this research opportunity, doesn't know anything about what she's supposed to go investigate. She and the rest of the Science Person Team gets flown to the Norwegian Antarctic exploration base by helicopter. The copilot asks Kate how the Cavaliers are doing and she doesn't even know what sport they play (it's jai alai, right?). The pilot and copilot say there's a storm coming in two days.

Time limit deftly established, the investigators go into an ice tunnel and introductions proceed all around. At the end of the tunnel:  A flying saucer (filmed with no grandeur to the reveal; I was hugely disappointed that the filmmakers just sort of dropped it into the movie like a double handful of aquarium gravel). There's an alien body frozen in the ice; Kate says that it will take about half a day to extract the corpse without damaging it.

Back at the base, people bat theories around about why the alien (the pilot? A stewardess?) left the ship after the crash; the best guess the scientists have is that the saucer crashed about a hundred thousand years ago. A crawler goes out and retrieves the body in a gargantuan ice block. When the alien corpse is back at the Norwegian science base, the MFIC decides it's time to drill through the ice and take a blood or tissue sample. Kate is vehemently opposed but doesn't get a vote. They use a 30mm drill to go through the ice and then spike the alien; there's a tissue sample in a petri dish now and the expedition chief is now happy. He gives a "this is so great and awesome" speech at a dorm party that the staff is holding.

And, of course, the creature starts to thaw.

The helicopter copilot goes to check out the ice brick by himself; someone else on the base yells "Boo!" at him because nobody thought to bring a Spring-Loaded Cat for this scene. The alien busts out of the ice brick and the copilot beats feet to tell everyone that their prize find is alive, missing, and probably pissed off because of that whole "drill bit to the thorax" deal earlier. Everyone pairs up and goes searching for the creature, and there's lots of "circle of flashlight illumination in the darkness" shots, which admittedly do look cool.

One of the searching groups hears a noise and a crew member named Henrik gets tongue-spiked, hauled back to where the alien is hiding, and eaten. The shoot the monster and set the building it's in on fire as a way to (hopefully) kill it. The MFIC says they need to do an autopsy on the alien while the American helicopter pilot says that he needs to fly a wounded crew member to McMurdo base for treatment that he can't get at the Norwegian base. During the autopsy the base commander finds a translucent duplicate of Henrik in the creature's digestive tract while Kate finds a chunk of metal in the creature's gut--it's a piece of surgical steal from Henrik's badly broken arm. A POV shot from a microscope shows the alien cells attacking and duplicating cells from Henrik's body.

The American pilot leaves with the shock patient in his chopper; meanwhile, Kate finds a massive blood explosion in the base shower and a few bits of oddly shaped metal on the floor that turn out to be tooth fillings. In the helicopter, one of the people in the passenger bay splits his goddamned head apart in a probable reference to the body-horror manga Parasyte; in the ensuing mayhem the helicopter crashes.

As if things weren't bad enough (alien monster on the loose, storm coming in, multiple dead people, crashed helicopter, NCIS renewed for another season), someone discovers the base radio has been destroyed. And when Kate tries to show people the blood splatter in the shower, it's been cleaned up. The MFIC says that they can't tell the world about what they've found in the ice, because of reasons. Kate tells everyone about the alien blood taking over the sample of Henrik's blood and deduces that the Thing can only copy organic materials, which it can do perfectly. But when it absorbs someone who has anything other than factory-original parts, it has to disgorge them. Someone named Juliette says that Colin might be a Thing-copy; she saw him leaving the showers. But it's a fakeout; Juliette herself turns into a CGI monster beast thing, and now Karl and Juliette are known casualties, but it's the unknown ones that are worrying everyone.

Apologies about dropping lots of names on you with no warning; the movie didn't really set things up particularly well on that score.

The survivors-so-far burn Juliette and Karl's bodies in a pit and Kate lays down the rules:  Nobody's leaving for civilization because letting the Thing loose on an unsuspecting world would destroy humanity in a matter of days. Any one of them could be a copy without even knowing it. The vehicles will all be intentionally disabled to prevent anyone from trying to get away (human or otherwise). Lars shows Kate where the white phosphorus grenades are kept and while those two walk back to the main building, the two helicopter pilots come back. Did they walk all the way from the crash? I guess so.

One of the Norwegians, Peder, wants to napalm the pilots on general principles while Kate says everyone has to wait for the results of an improvised "Thing or not" blood test. The pilots get locked up together as a quarantine (and if one of them was a Thing, they both are now, I guess). Then the science lab gets set on fire and there's yelling all around. Kate improvises a new plan--anyone with fillings in their teeth has not yet been duplicated (and while I didn't really care for the movie, I'd like to give credit for a new and distinct Thingness test which prevents the movie from repeating one of the standout setpieces from the 1982 version).

Three people don't have fillings (Colin, the MFIC and a British guy); they get separated from everyone else. Two of the Norwegians go to get the pilots, who are no longer in their quarantine shed. Jonas comes back alone and says Lars is missing; plenty of yelling all around and the pilots show up with a flamethrower. There's a standoff until the copilot uses a pistol to shoot Peder (who is the Norwegian toting another flamethrower). Leaking fuel from the weapon reaches the pilot light on the muzzle and there's an explosion. One wounded man's arm detaches itself and skitters up to Jonas, who exits the film getting lamprey-kissed to death. Another person gets melded together with the Thing and slouches off while Kate torches Jonas' body with the remaining flamethrower and has to mercy-kill the helicopter copilot as well.

Now the base is entirely on fire. Kate and another guy (toting an axe instead of the flamethrower--I'd feel ripped off, myself) go on monster patrol. The British guy gets consumed, and it turns out that using an edged weapon against a forearm creature just results in two smaller creatures but the flamethrower makes short work of them. The axe gets left in the wall, so everyone who wanted to know exactly how an axe was stuck in the wall in the Norwegian base in the Carpenter film can breathe easier after a 19-year wait. The rest of us just figured someone stuck an axe in the wall.

Another "oh, that's how that happened" sequence follows, where Kate hoses a Thing body down with fire after it stalks the axeless man. I mean, I understand that the filmmakers for this version had to use a lot of story beats that were supplied by the earlier film; I just don't know why they're taking so much time and effort to do it.

Next up:  Snowcrawler chase scene! Lars is still missing, Kate brought the white phosphorus grenades that she knew about, and the first snowcat is at the alien ship, which powers up as Kate arrives. There's a "run away from the opening panels" bit and Kate falls into the ship's engine room or something (and I do like that there's stuff on the ship that looks interesting and far beyond Earthly technical capabilities but still completely unexplained). We get a good long look at the spaceship sets when Kate goes exploring. She finds a glowing blue energy cube and the Thing sneaks up behind her, with a truly regrettable CGI face. It corners her in a narrow hallway but she grenades it to death.

The American helicopter pilot and Kate return to a snowcat and Kate realizes that the man is missing his earring. And even worse, he points to the wrong ear when Kate brings it up; good thing she's still got that flamethrower. She sits in the snowcat as the film fades to black, with credits intercut with a clip from Ennio Morricone's magnificent score from the 1982 film playing over scenes of Lars and a Norwegian pilot chasing after a dog, setting up the Carpenter movie.

Well, that certainly was a film. But I really couldn't bring myself to care about it at any point--the ending is preordained (everyone dies), and although there are some nifty moments scattered around for the most part it's just a story spinning its wheels from setpiece to setpiece and then wrapping up. And the creature effects--the reason to watch the movie--are all janky looking computer effects that were apparently superimposed over old-school practical puppet and animatronic gags. It's just not a movie that had any reason to exist and it didn't justify the time spent watching to me. I don't mind watching terrible movies (check out my five-part B Fest travelogue if you have any doubts on that score) but this one's just sort of there, taking up space on the screen until it isn't.