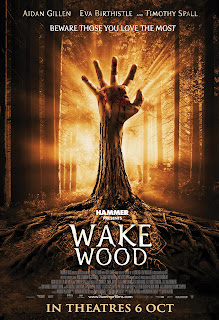 Oh, man, it's another sleepy little town with a secret. I love those. Wake Wood spins a lot of the clichés associated with that plot line, though, and does some really interesting things to undercut the usual not-quite-normal small town tropes from other movies. There's also some nifty Irish scenery and accents (including the lead actor; you might know him as Councilman Carcetti from The Wire or Lord Baelish on Game of Thrones but he gets to use his real accent here).

It starts out with a happily married couple celebrating their young daughter's birthday; in a horror movie, starting like this is like hanging a KICK ME sign on your own back and then daring the universe to do something about it. The husband is a veterinarian; his daughter Alice goes to see a dog in a cage that he's going to be treating before school. The dog has rabies and it ends horribly.

Scenes of them trying to save their daughter's life are intercut with the couple driving to Wake Wood--there is no child in the car, which leads me to infer that Patrick and Louise are looking for a change of scenery because they can't stand to keep living near the constant reminder of their daughter's death--and they're shown settling in to life in the rustic agricultural village, with Patrick treating cattle as the new vet in town and Louise working as a pharmacist.

At first, it's only a few tiny things that appear suspicious. A woman trying to refill an asthma inhaler for her niece evades a couple of friendly questions and only has a prescription that expired a year ago--not the most sinister of occurrences, but the woman's manner seems slightly off and her niece, Deirdre, seems a little bit spacey.

Then the couple's car dies at night; the engine conks out near Patrick's boss's house so they set off to find him and ask who the best all-night mechanic in Wake Wood is. Louise and Patrick get separated and Louise sees some kind of weird rite going on; a cocoon of branches and mud is chopped open--by Arthur, the man who offered Patrick the job as veterinarian because the town needed a younger and more capable person looking after their livestock--and a nude man climbs out, covered in glop and welcomed by a circle of smiling, quietly happy people from town. The sight of this ritual triggers flashbacks to Alice's death in Louise; she runs into Patrick in a state of near-hysteria and flees for home, refusing to discuss what she saw. And when Arthur is sitting in their living room, just wanting to make sure everything's okay with the newly arrived couple, well...that doesn't make either of them feel any better about whatever the hell is going on in town.

Later, Deirdre and the man from the ritual show up in town; after she sees the both of them, Louise witnesses a procession of people clicking sticks together and walking through town; the asthmatic girl is in the last one in the parade, and the only one not wearing black. She tells Louise "Alice has a lovely voice" as she walks by the pharmacist. Louise flips out (understandably), confronts Deirdre's "aunt", and is asked if she wants to bring her daughter back to life. But Deirdre's mother truly can't say if that's possible for the couple or not. And that's a little more ambiguous an answer than anyone would ever expect on that issue.

A horrifying accident on the job leaves Mick the cattle farmer dead, and Patrick and Louise ready to write Wake Wood off as an experiment that didn't work out. Arthur, trying to stop them from doing so, says that he can bring their daughter back to life for three days and give them a chance to properly say goodbye. Patrick dismisses the offer as a sick joke; Arthur says that his wife's already put the pieces together for herself and knows enough not to reject the overture out of hand as being impossible.

There's a catch, as there always is. If the person's been dead for more than a year the ritual can't be carried out. One divinatory ritual and one gigantic lie from Patrick later, Arthur explains the rules of what they're about to do--Alice will be returned to life as a living, breathing person and retain memories of her life. She can't leave the town boundaries of Wake Wood (the magic only works within the village) and at the end of three days she will be gone again, forever. And lastly, if the grieving parents agree to do this, they will have to live in Wake Wood for the rest of their lives and serve the community without rest or fail (the little twitch of a half-smile when he says this is my favorite part of Timothy Spall's performance--he's obviously remembering when he was offered the same deal decades ago, and reflecting on what he's gained and what he paid in the decades since).

The next part of the ritual is to secure a fresh cadaver; the life force that it used to contain is used to generate the revived body of the person that's supposed to come back. The cattleman's widow has a bad gut feeling about the whole deal and refuses to let Patrick and Louise use her husband's body for the rite, only relenting when Arthur points out that she's going to need to ask someone else the same request she's not permitting in order to see her husband again.

The next test to see just how committed Alice's parents are is rather gruesome--they need to provide a lock of hair or other physical piece of their daughter's remains in order to bring her back. They don't have a lock of hair or fingernail clippings handy, so a genre-appropriate rainstorm springs up and it's time for Patrick to start digging up his daughter's grave. It's hard to say whether it's worse for him since he's the one doing the labor and having to think about it, or worse for Louise because she's got to watch it happening. They retrieve one of their daughter's fingers and the ritual can proceed.

The body that's going to be used is packed in mud; words are chanted and the grieving parents' blood is shed. The muddy shell is set aflame and the impossible happens--the Daleys have their late daughter back.

The next morning, they welcome Alice back to the world with a big breakfast and a day spent just playing around outside. At first it's just the little things that go wrong. As it turns out, over the centuries spent bringing people back to live for a little while in Wake Wood, there were some things that the villagers discovered about how to do the ritual, and what the limits are of its powers.

The farmer's widow uses the bribe of a pony ride to get a little alone time with Alice and uses a divination tool that looks like a triangular Celtic abacus to figure out why she feels bad about the little girl. It goes poorly and her parents try to get her out of Wake Wood; when that happens, her fatal wounds reappear and Patrick and Louise get a visit from the Council of Creepy Irish People Holding Lanterns in their living room, telling them that the rules have been broken and that they have to give up the third day with their daughter as a consequence. Understandably, they refuse (saying they still have one day left according to the terms of the ritual).

Either Alice came back wrong, or something else hitched a ride with her. It's not her fault--she didn't choose to lie about her death date in order to qualify for the rite. But her parents love her (or who they think she still is), even with mounting evidence that nothing has gone right with her resurrection. And it's the other people in Wake Wood--at first--who wind up as collateral damage when things spiral down from bad to worse to ghastly. The Daleys don't escape, though, as they were warned there are consequences to be paid when you don't hold up your end of the supernatural bargain that allows three more days with a departed loved one...

I wish I could say this one was a total success, but I really can't. There's a lot of cool atmosphere in the first couple of acts but the innovation peters out and you just get an evil kid in the third one. I'd say it's still worth watching, but it's not the masterpiece of dread I was hoping for out of the revived Hammer. Everyone brought their A game but the novelty of Celtic pagan horror and the sleepy little town with a secret not being the source of the horror can't overcome a pretty standard third act and a stinger ending that really did not make a lot of sense to me.

But with that caveat, I really do like that it's a movie about grownups and their fears. Living longer than your child is about the worst thing that can happen to parents, and the problem is compounded by Louise's inability to conceive another child. It's either the ritual for the Daleys or nothing, and Arthur isn't the only one willing to overlook a few irregularities in order to snare the couple and keep them bound to the village after granting a supernatural request. And that character goes from concerned elder to steely enforcer as things continue to get worse--I'm wondering how badly his own three days went, decades ago, when Wake Wood needed a new animal doctor. He's been there long enough to see things go badly and for them to go well over the years. Perhaps the worst part of it for Patrick is knowing that he'll be expected to help everyone do better with their opportunity for resurrection than he did with his. And in another several decades he'll be telling someone new that if they go ahead with the ritual, they'll be bound to serve the village for years upon years, and a funny little twitch of a half-smile will appear on his face for the briefest of moments as well.
Posted by Tim Lehnerer at 7:10 AM