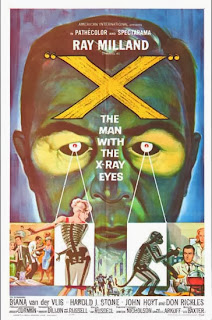 Hey, it's Ray Milland again! This time we're taking a look at the later part of his career, instead of his Academy Award-winning portrayal of an alcoholic writer or the romantic lead in a ghostly mystery. This is the portion of his career where he was menaced by lots of frogs or getting his head grafted to Rosie Grier's shoulder. The portion where he was being used by Roger Corman and American International Pictures to bring some star power, talent and class to their usual run of the mill drive-in fodder.

And thank goodness for it. Even though Ray wasn't getting the big parts, he was still committed to his performances in a big way. I hate watching a movie where the big-name stars don't appear to want to be there. I can understand and sympathize--it can't be any fun going from prestige pictures to grindhouse fare, but as an audience member I want my money and attention rewarded, not punished.

The film starts with Dr. Xavier getting his eyes examined for the second time in ninety days; the optometrist tells him his eyes are in perfect condition but Xavier talks about how little they actually perceive--and he's got a point. Visible light is a miniscule fraction of the electromagnetic radiation out there; we can't see radio waves, X-rays, or cosmic radiation at all. Nor infrared or ultraviolet, microwaves or...well, look up "electromagnetic spectrum" on Wikipedia. We got ripped off. There's so much out there to see.

In a standard exchange in movies of this type, the optometrist tells Dr. Xavier that only the gods can see everything, and Xavier says he's closing in on them. By explicitly mentioning plural gods instead of the single Christian one, the movie reveals that it's going to be a Greek tragedy full of hubris, with the doomed protagonist's genius providing the seed of his downfall from just about word one. In the next scene, Xavier grouses about how little information X-ray films provide and how much guesswork goes into diagnoses with shadows of bones and organs on film.

Dr. Fairfax is a liaison between the good doctor and the foundation that wrote Xavier a $27,000 grant; he's not given the unnamed foundation so much as a postcard with a progress report on it and she's there to see what the heck he's been up to. And what is that? Well, he's developed a chemical serum that will make it possible for people to increase the amount of EM radiation they can see and interpret in a convenient eyedrop form. He demonstrates with a lab monkey; after getting the eye drops of SCIENCE! it's able to see through different layers of material and signal that it's seen white, red and blue sheets of metal--one after the other as its perceptions expand. It then dies of a massive shock, since its cute little monkey brain can't handle the massive upswing in sensory perception.

But $27,000 buys a lot of lab monkeys and Xavier is positive he's got something truly world-changing just a step or two out of his reach. Fairfax helps with an autopsy and determines that the eyedrops themselves didn't kill the lab animal; it's physically fine. But until there's a way to prepare the lab monkeys for what they're going to experience, there's only so far the experiments can go.

The foundation wants a progress report from Xavier in two days (better get typing, doctor...) and he vows to give them something so much more convincing. Jump cut to his optometrist:  "No! It's too dangerous!"; that's the kind of line that is completely obligatory in movies like this but it still gives me a charge when I hear it. Xavier points out that it's unethical to test his formula on anyone else; worse than that, nobody that would be exposed to the drug as a volunteer would have the scientific training to explain what was going on under its effects. He makes a quite persuasive case and one more jump cut later he's dictating notes into a massive reel to reel tape recorder and the optometrist puts one drop of the serum into each eye.

The effect is nearly instantaneous, and the movie earns my favor by having Xavier delighted at all the new lights and colors that he can see--he's attained his scientific dream, and even if things are just a jumbled mess of bright colors, it's still proof that the last years spent working on his formula weren't wasted. He's that rarity in movies:  a scientist moved by the awe and wonder of science. Yeah, technically, he's still also a mad scientist, but you're going to get that in movies.

After a few moments' concentration, Xavier finds that he can see through solid objects, but only a little--his theory is that he isn't quite yet acclimated to the new sensory information. It's also very telling that even as he's done more than anyone in human history to explore the nature of sight, he's disappointed that it only goes so far at first. He immediately puts in another drop and the light brings him to screaming agony; he then passes out for a full day. This fails to impress the foundation sufficiently to continue his funding.

Back at his regular job of being a doctor, Xavier immediately finds out that his new vision is still there, it's something he can turn on and off at will at this point, and that it helps him diagnose a problem correctly where the planned surgical intervention will be useless. He also finds out that his brusque, overbearing manner towards another doctor (go Ray Milland!) and inability to explain how he knows what he knows about the young patient make his new sight less than useful when trying to help people.

Dr. Fairfax takes him to a party (where he is easily fifteen years older than everyone else there), and while the other partygoers are dancing to that semi-frenetic jazz that American International uses in all their scenes where people are having a get-together the enhanced vision kicks back in. It's too bad the movie was made in 1963; the all naked party dance is just shins and collarbones. Watching Ray Milland's delighted grin is still awesome, though.

The next day, Xavier assists a colleague with a  heart operation and takes it over before the first incision; the other doctor is furious with the imposition and even angrier that Xavier turns out to be doing the right thing by taking control of the situation, saving the patient's life. It's still bad for your career when your prelude to a delicate pediatric cardiac intervention is "You all think I'm mad, don't you?" rather than "Scalpel, please". The doctor is so thrilled that the operation went well that he's going to initiate a malpractice suit against Xavier; Fairfax and his optometrist drag him out of the operating room and start doing some tests to see just how badly he's screwed up his nervous system. (The answer:  Badly enough for the Adverts to do a song about him.)

The optometrist and Dr. Fairfax try to buck Xavier's spirits up by saying they can all work together to reverse the effects of the eyedrops. That's the last thing Xavier wants to do, though; he's figured out that the effects are cumulative, and that with more of the formula he could see more things than any human being ever has. When his optometrist tries to sedate him, Xavier accidentally knocks him out a window to his death; the doctor realizes that he looks insane and needs to flee before things go even more wrong than they already have.

An indeterminate amount of time later, stock footage of an amusement pier in California has a new attraction:  Mentalo, the man with the miraculous mind. It's Xavier, of course, using his ability to see inside peoples' pockets to do a mind-reading act. And at this point, Ray Milland has the "I'm working for AIP" face on, which I was glad to see--he looks weary and regretful of his career choices when he's stuck in the carnival booth as a mind reader. And, ironically enough, as he's gained enough control over his vision to do this, it's brought him less fame, fortune and prestige. It's great watching him play off of Corman MVP Dick Miller in this scene, and the normally intolerable Don Rickles does a fantastic job of playing a greasy, money-grubbing, criminal lout.

And the first thing the carny barker does when he realizes that Xavier isn't using any gimmicks? Cajoles and blackmails him into starting a faith-healing storefront church. Xavier is still able to diagnose whatever's wrong with sick people, sending them off to hospitals and doctors with the knowledge of exactly what is wrong with them. Fairfax encounters some of these patients and realizes how they must have come across the information. She stops by the healer's storefront--and there's a wonderfully creepy implication of Xavier's powers. He doesn't recognize her at all; it might have been months since he's ever actually seen anyone's skin.

From there she and Xavier go on the lam, stopping off in Las Vegas, where it turns out that X-ray vision is very useful for slot machines and blackjack; Xavier still can't control his enhanced vision, though. And with the cumulative effect of all the eyedrops, he's seeing farther than anyone ever has, or possibly was ever meant to. Worse than that, the shifting chaotic light at the center of all things knows it has been seen, and starts to look back. There's only one thing for Xavier to do at that point, and it's irreversible in an Old Testament kind of way.

This one's another Corman flick from the sixties, but it's so much more lively than The Masque of the Red Death. Nobody's ever going to mistake it for a thrill ride, but there's a lot of sober contemplation about just what Xavier's done to himself and a series of side effects that make it impossible for him to function as a normal person in society (one of my favorites--he can't sleep easily or well because he can see through his own eyelids). It doesn't cost any more money to get a decent screenplay or to think through the implications of what's happening to the protagonist, and this movie does a fine job of showing just how much is going wrong for its ill-tempered hero.

The effects, when they happen, are either prisms of light or medical-book illustrations superimposed on the actors. But if you don't require James Cameron levels of technical achievement in your science fiction you'll roll with the shoddier effects and just dig the performances and storyline. Watching Xavier deteriorate over the course of the movie roughly parallels the Lost Weekend performance that won an Oscar for Milland, and it's satisfying to see him elevating the material here. He's a trouper, and a consummate professional even in a shoddier and shabbier film. It's just nice that there's something for him to work with here, rather than stranding the poor guy in a movie that doesn't let him engage and be engaging.
Posted by Tim Lehnerer at 7:12 AM