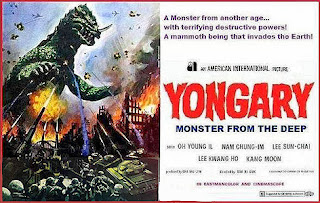 I fully admit that I might just be too American and thick to understand some of what was going on in the movie, and that the AIP dub job probably went for expedience rather than accuracy when translating the dialogue for the movie. For that matter, according to the IMDB the Korean prints of the movie are lost forever, so all we've got to go on is the AIP-created TV prints of the film. But even given all those various factors, why release the movie under that title? The titular monster rises up from an earthquake on land, not out of the ocean. He's not actually a monster from the deep under those terms, is he?

The credits and IMDB information are sparse as well, so I'll be calling one of the characters Astronaut Guy since I didn't catch his name and the normally unimpeachable IMDB isn't a hell of a lot of help. I'm really trying to resist making a "cheap Korean knockoff" joke or two (or eighty), but really that's what the movie comes across as. Especially considering that it was the first non-Japanese rubber suit giant monster movie; thirteen years after the first Godzilla flick we got a fire breathing bipedal reptile with back plates destroying a city and being immune to tank rounds. The monster isn't a complete ripoff of Godzilla; he's got a horn on his nose.

The plot kicks off with South Korea's top rocket pilot being called away from his honeymoon so he can do a flyover mission monitoring a nuclear bomb test in "the Middle East", which I suspect was actually North Korea in the original version of the film. First of all, I don't know what having one guy in a Gemini-style space capsule was supposed to do to monitor a nuclear test, and second of all I didn't know South Korea had a space program. Third of all, you can't talk to a space capsule through an oscilloscope but that's what they do here.

The nuclear test leads to a massive earthquake, and the epicenter of it is moving. That's even less plausible than the South Korean space program using oscilloscopes to talk to their astronauts. When it gets near what I assume is Seoul, the monster that we all knew was causing the tremors gets out of the ground and starts breaking stuff. And, to be honest, the suit is pretty darn cool. Its eyes can open and close; so can its mouth. And its horn lights up to shoot lasers, though that won't happen until the third act. All in all, it's a great example of something a ten year old kid might draw after seeing three or four Godzilla movies and trying to make up their own monster.

The UN sends a team of scientists to Korea (the movie always says "Korea", not North or South; I assume that's a function of the dubbing rather than the original script). They're pretty useless. The monster continues to break stuff (and actually there's a whole hell of a lot of model scenery destroyed in this one; the two bridge-destruction sequences are my favorites). Both the earthquake damage and the monster rampages are realized about as well as they could be for the budget--which was obviously tiny but they really did try hard to get everything out of it that they could. Yes, the suit has an obvious nozzle in the mouth for the flame effect, but there's a flamethrower built into a monster costume! Extra points for that effect, especially because the poor stuntman in the suit is sharing space with a tank of pressurized flammable gas.

We get the obligatory "crowds running away from the monster" scenes as well as a couple "people listening to radio news" montages--again, essential parts of the formula. If the movie didn't show people listening to the radio about the monster attacks then the panicky running away scenes wouldn't make sense, would they? Yongary continues to wreck things, drinks several storage tanks' worth of gasoline and fuel oil (the budget and F/X crews were not up to the task of actually showing this happen, but take Icho the tiny-shorts-wearing bratty kid's word for it; he saw it happen) and has the kaiju equivalent of an allergic reaction to a tank full of ammonia. Ilu the scientist, upon hearing this, works on a chemical weapon that will hopefully kill Yongary while there's still a South Korea to protect.

The damage from a missile attack puts Yongary to sleep (or possibly he got tired wreaking all that havoc and took a nap). Ilu and all the various important cast members crowd into a helicopter to drop the ammonia weapon on to Yongary; it rains and the monster stumbles around a lot. Icho uses an "itching ray" that he snagged from Ilu's lab to irritate the sleeping monster as some kind of inexplicable prank or youthful escapade. Yongary wakes up and lethargic surf-rock is played over his flailing and scratching--the sequence my friend Sean describes as "a giant monster dances like nobody's watching". It is the most inexplicably odd thing in the movie and I feel grateful that I saw it.


The second helicopter / chemical weapon sortie is more successful, interrupting Yongary in the middle of another rampage and putting him down for good in a lengthy sequence where I actually felt sympathy for the poor thing; I realize it was a destructive force of nature that was going to kill millions of people through its rampage, but watching it flail, stumble, fall, twitch and then hemorrhage to death was pretty hard to take. Even more so as the blood stains the river it fell in, and the suit construction and blood trail makes it look like the monster is bleeding to death rectally. I cannot even imagine what that scene did the the Korean or American kids who watched this one in theaters or on television. This flick was never one that the UHF stations in Chicago had the rights to, so I missed out on that nightmare fuel myself when I was just Kid Telstar.

Looking back on this film, I'm glad that I found a HubrisWeen-appropriate film that started with a Y, but there really isn't much of anything to say about it. It's a knockoff of a Godzilla movie (though the irritating child who thinks the monster shouldn't have to die is more of a Gamera series thing) and it hits all the notes you'd expect from that. The most bizarre and surreal moments don't appear to be the result of a culture clash; instead, I think having the monster dance around after being hit with an itching ray would be weird no matter what your sociocultural background would be. And seeing the creature bleed out from its backside probably didn't look any better to the native South Korean audiences than it did to me.
Posted by Tim Lehnerer at 7:00 AM